“Mystery Team” is a term invented by Jon Heyman at the 2010 Winter Meetings in Florida. That’s when he published a rumor in Sports Illustrated that then-free agent pitcher Cliff Lee was being courted by “the Texas Rangers, New York Yankees and a third mystery team.” He added — and I am not making this up — that “the mystery team remains a mystery and is also seen as a long shot.” That’s a heck of a line.

The whole “Mystery Team” thing was initially seen as a joke — and by some as Heyman trying to sound plugged in when he didn’t know anything — but he showed all of us when, the very next day, Cliff Lee signed with the Phillies who were, in fact, the “Mystery Team.”  With that a meme was born, and Heyman has owned it since then, mostly ironically, but certainly as a part of his personal brand. I’ve long been critical of Heyman for a lot of things, but the “mystery team” thing is kind of fun, actually. Takes some of the seriousness out of all of this. It’s certainly put his own stamp on his beat.

Welp, we got another one today: 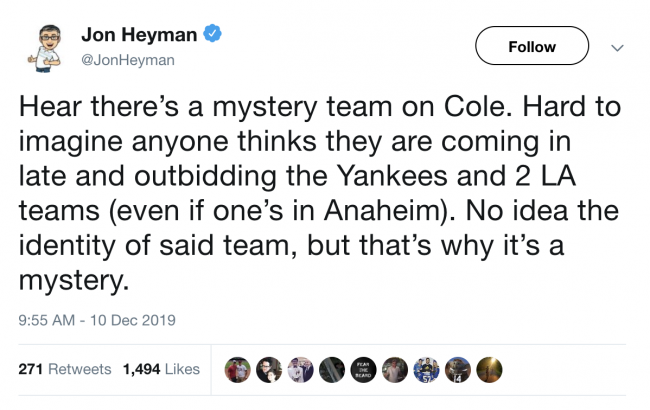 I like to poke fun at the concept of “Mystery Team,” but given where the bidding is already, I don’t think that Cole needs a phony rumor of another bidder in order to inflate his market. He’s gonna make bank. As such, I’m willing to believe that there is, in fact, an unnamed team in the bidding.