There are a lot of useless things in the world.

Screen doors on submarines. Ejector seats on helicopters. But I’m struggling to think of one thing more useless than hot stove rumors in which a team is said to be interested in so-and-so a player but “only at the right price” or “only if the budget will allow” or words to that effect.

In related news, here’s a thing that Jon Heyman is saying about the Los Angeles Dodgers: 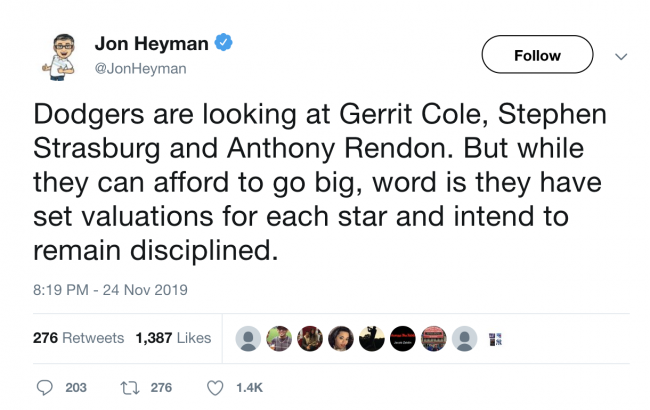 I’ve been in the baseball news-churning business for a long dang time now, and I can remember back when this was the sort of thing that would make people talk a lot. But it really says nothing, right? At most it says “[Baseball Team] likes good baseball players but is unwilling to pay market price for said baseball players, even though they can totally afford it.”

The more interesting thing here is trying to figure out why this exists as opposed to what it says.

Typically, this kind of thing is offered by team-friendly reporters who are talking to someone with the team, in this case the Dodgers, who wishes to create the impression that the team is “in on” a top free agent. Some non-news that, if and when the free agents sign elsewhere, the team can point to and say “hey, we were interested too!”

That may not be the exact case here. It’s well-known that Heyman’s primary sources are agents, so I’ll be charitable and say that this is a brilliant attempt at agent-driven jujitsu, in which said agents are trying to create the impression of a rich team tentatively entering the market in order to put pressure on bidding teams. Or, perhaps, some attempted shaming of the Dodgers by focusing on the combination of their financial means — “they can afford to go big” — with their implied unwillingness to do so. I dunno.

No matter who is floating this non-news, however, it still says nothing. All teams love good players. All teams would love to have them if they could pay exactly what they wanted for them. As such, this is the exact opposite of news. Just remember that when — especially over the slow news days which typically accompany Thanksgiving — people are trying to pass this kind of thing off as a hot rumor or whatever.