The Houston Astros announced late this afternoon that they have fired Assistant General Manager Brandon Taubman.

In the statement announcing Taubman’s termination the team admitted that their initial denial of Taubman’s acts — an aggressive denial which cast Sports Illustrated reporter Stephanie Apstein’s report as “misleading and completely irresponsible” — was wrong, and offered a specific apology to Apstein. “We were wrong,” the team said, and confirmed that Taubman’s comments following last Saturday night’s ALCS victory were aimed at “one or more reporters.” Notably, they did not specifically say why they were apologizing to Apstein (i.e. that they accused her of fabricating the story). I guess they’re still trying to figure this out.

Those comments, you’ll recall, were “Thank god we got Osuna! I’m so [expletive] glad we got Osuna!” Referring to Astros reliever Roberto Osuna. They came after Taubman had reportedly made multiple complaints about the reporter taking issue with the Astros’ acquisition of Osuna in the wake of his domestic violence suspension last year. The Astros said “[Taubman’s] conduct does not reflect the values of our organization and we believe this is the most appropriate course of action.”

The fact that it took this long to get here — and, really, that even got this far at all — is quite remarkable.

If, in the wake of the incident being reported on Monday night, the Astros had simply said that they, as an organization, do not endorse the values reflected in the report and that they intended to investigate the matter, there’s a pretty good chance it dies down and Taubman keeps his job with, perhaps, a suspension or a fine.

The fact that the team, instead, lashed out at Apstein as it did placed a gigantic magnifying glass on the matter and made a heck of a lot more people pay attention to it than otherwise might have. When they did, it caused many to relitigate the acquisition of Osuna and the Astros’ comments around that time and to the present day. As late as today there even were articles being written scrutinizing the team’s owner, Jim Crane, and his past as well, casting a harsh light on virtually all aspects of the organization. Such a thing never would’ve happened if this had been merely about Taubman rather than the Astros and their bizarrely aggressive response on Monday.

And, to be sure, I don’t think this settles the matter completely. Who was behind that response on Monday night anyway? Who approved going after a reporter in an effort to ruin her career by accusing her of fabricating a story. I’ve read a lot of team statements in my time and I can tell you that that was not the sort of thing that would be casually issued by a mid-level media relations employee. Someone high up no doubt decided that the aggressive tack — and now, confirmed, false tack — was the best move. If it was someone other than Taubman, they too should be accountable. If it was Taubman, the question remains why the subject of a controversy was allowed to author the team’s response to the controversy.

But we are here and, thankfully, the Astros have finally done at least part of what they needed to do a couple of days ago: hold Taubman accountable for his conduct and apologize for the team’s conduct in falsely accusing a reporter of fabricating a story. However broadly and vaguely they did it.

Here is the team’s statement: 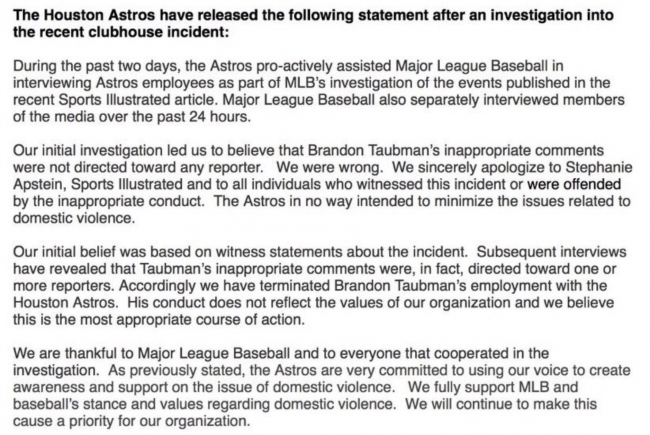