The comments and their context strongly suggested that Taubman was, at best, making light of the criticism the Astros received for trading for Osuna following his domestic violence suspension resulting from very serious domestic violence charges lodged against him in 2018. To some it smacked of Taubman taking something of a victory lap over the Astros’ controversial — and poorly handled — acquisition of Osuna and came off as extraordinarily insensitive and abjectly tone deaf.

The Astros originally declined comment before the report was published. Late last night, after the story went live and once it became apparent that it cast Taubman in a bad light, they issued an angry and defensive statement, calling the Sports Illustrated article “misleading and completely irresponsible.” Again, despite the fact that the report was corroborated by multiple eyewitnesses. The team’s statement was itself then subjected to intense criticism today.

The Astros are now taking their third bite at the apple, releasing the following statements: 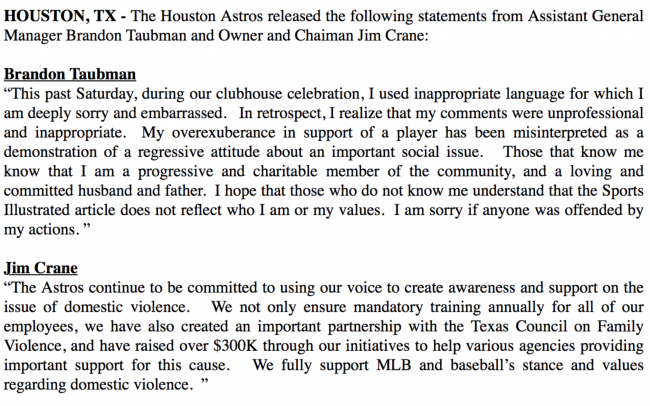 It’s worth noting that nowhere here do the Astros apologize or even reference last night’s statement which, in essence, called Sports Illustrated reporter Stephanie Apstein a liar. A statement which they no doubt would’ve let be the last word if it hadn’t been met with such pushback. Which suggests that the above statements — of the “I’m sorry if anyone was offended” non-apology apology variety — are more about damage control than sincerity.

It’s also worth noting that Taubman’s comment takes the oh-so-common tack of referencing the fact that he is a “husband and a father,” which is irrelevant given that at issue were his acts and words, not his identity. We are not what we believe ourselves to be in our heart of hearts. We are what we do. We are how we treat one another. That’s all that matters. Attempts to deflect from that basic fact of humanity are, just that, deflections. And patronizing ones at that. Taubman’s statement would’ve been way better if it had stopped after the second sentence.

As for owner Jim Crane’s statement, it continues the Astros’ tack of wanting to have it both ways. There is no rule that says they could not have traded for Roberto Osuna. What made the whole episode unseemly, however, is how they claimed to have a “zero tolerance” policy against domestic violence and claimed not to be breaking it when they clearly did so because, hey, Osuna was cheaply had. Which means that they actually have a “some tolerance” policy — as do a lot of teams — but they wanted to act like they were better than that and deflect criticism from those who took issue. Here again, Crane wants it both ways by using what should be a straight apology for one of his top employees’ boorish behavior as an opportunity to once again claim that they are better than they truly are when it comes to domestic violence.

If you don’t have to care about an issue and you, in fact, don’t care, well, fine. You may catch hell from people for that stance, but you can do what you want. If, however, you want credit for being on top of an issue, do the work to earn it. If you fall short of your or society’s expectations, apologize and try to do better. What you cannot do is fail and then try to use your failure as a means of turning the tables on those who criticize you while claiming that, actually, you’re really really good on the topic.

“Domestic violence is extraordinarily serious and everyone in baseball must use care to not engage in any behavior — whether intentional or not — that could be construed as minimizing the egregiousness of an act of domestic violence.  We became aware of this incident through the Sports Illustrated article.  The Astros have disputed Sports Illustrated’s characterization of the incident.  MLB will interview those involved before commenting further.”

The comment came out at almost the exact same time the Astros’ comments were released, which suggests to me that they were coordinated. Which, hey, they’re all trying to end the conversation about this before the first pitch of tonight’s Game 1. I will not hold my breath for anything to come of MLB’s “interviews” of those involved.

Apologies are easy. We’re taught how to do them when we’re two years-old. Only when we start thinking we’re better than everyone do we start qualifying them to the skies to the point where they lose all meaning.

UPDATE: The Baseball Writers Association of America has issued a statement: