Rain, rain go away, come again some other day.

Because if it doesn’t, people are gonna have to change their postseason plans.

The weather for the postseason has been beautiful so far, but that looks to change on Wednesday when big rain is expected to blow through New York. That could cause some problems for ALCS Game 4 and, if the game becomes necessary, a potential NLCS Game 5 could be moved back from an afternoon to an evening start.

As of 7:30 AM this morning, the forecast for the Bronx on Wednesday night is showing a 95% to 100% chance of rain between 7PM and 10PM, with it tapering slightly after that, but not dipping below 50% until after 1AM early Thursday morning: 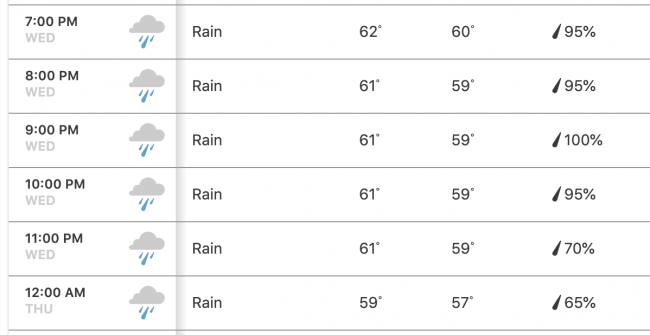 Baseball can handle rain delays, but that looks more like the kind of pattern that leads to a full postponement, not mere delays.

If the game is postponed the league is likely to move the Cardinals-Nationals Game 5, if it is indeed necessary, from its current 4:08 PM starting time to prime time. Which, actually, would be a very good thing apart from mere TV start times, because Washington is expected to have a ton of rain in the mid-to-late afternoon on Wednesday, with things clearing up and drying out in the early evening. That would make a 7:30 or 8PM start time a whole lot better, weather-wise.

If those moves happened, MLB would then move ALCS Game 4 to Thursday, ALCS Game 5 to Friday, eliminating the travel day, and a potential ALCS Game 6 would be played in Houston on Saturday.

The call to postpone Wednesday’s Astros-Yankees game would likely be made well in advance of game time. The call to move a Cards-Nats NLCS Game 5 to the evening is contingent on the Cardinals actually showing up for this series for the first time and winning a dang game.