When I woke up to do the recaps this morning the Cardinals and Dbacks were still playing. I’ve been doing this for 12 seasons and I have to say, that’s a first. Baseball, man. You see somethin’ new every day.

Diamondbacks 3, Cardinals 2: The game took 19 innings and 6 hours and 53 minutes and tied a major league record by featuring 48 strikeouts, so that sounds fun. The Cardinals scored on a Dexter Fowler homer in the first inning, held that lead until the bottom of the ninth when Ildemaro Vargas homered off of Andrew Miller to force extras, the clubs traded runs in the 13th and then, in the bottom of the 19th, Vargas came up big again, knocking in the winning run, mercifully, with a walkoff single that I got to watch while starting my second cup of morning coffee. Just before that single, with two outs and runners on first and second, Mike Shildt intentionally walked Christian Walker, putting the winning run on third, to get to Vargas who was 3-for-5 with a homer already. I won’t say the fix was in, but I will say that the Cards and Dbacks play a 12:40PM Pacific game today and, dadgummit, ya gotta get some sleep.

Pirates 9, Cubs 2: The Cubs lose their seventh straight, this one thanks to a seven-run seventh inning in which they committed a couple of errors on a five-error night. They stranded 11 runners and went 1 for 10 with runners in scoring position. They lost to a Pirates team that had dropped its previous nine. I feel like the Cubs have already decided not to bring Joe Maddon back as manager next year but, on the off-off-off chance that they haven’t, watching them mail it in against one of the hottest messes of a team around is a good reason to cut bait and of in a different direction.

In other news, Jason Heyward offered an interesting quote after the game:

“You don’t ever envision failing. Whether you’re a parent, someone going to work, playing a team sport, you just don’t never envision, so it’s tough to accept when it happens.”

That’s the difference, I think, between professional athletes and most of the rest of us. I’m pretty sure that even the generally confident and competent among us either envision failing pretty frequently or, at the very least, have to work VERY hard not to have thoughts and fears of failure crowd into our minds. I’ve heard enough athletes talk about failure, though, to believe that most of the best of them simply don’t allow for the possibility. They’re already physically different than us, more gifted and skilled, but they are also simply wired differently than the rest of us too.

Mets 5, Marlins 4: Miami took a 4-0 lead into the seventh when Michael Conforto put the Mets on his back and began marching. That inning he hit a two-run homer to cut the lead in half and, in the bottom of the ninth, he hit another homer to tie it up and force extras. In the bottom of the 11th he led things off by drawing a walk, took second on a plunking, and took third on an intentional walk. That intentional walk actually worked for a second as Conforto was erased by a force out at home but then Brandon Nimmo drew a walkoff walk to send the Mets home winners. The Mets will be eliminated in the next day or two, but you can’t say they gave up on the season.

Rays 2, Yankees 1: Cameron Maybin hit a homer in the third, Kevin Kiermaier hit one in the fifth and the game remained scoreless until the 12th. That’s when Ji-Man Choi socked a walkoff homer off of the 11th Yankees pitcher of the evening, Cory Gearrin. I know this game didn’t matter for the Yankees, who have already clinched, and I know they’re trying to rest guys for the postseason, but it’s quite the thing that Aroldis Chapman saw no work in this one — which did have postseason implications for three other teams — and has only pitched three times in the entire month of September.

Indians 11, White Sox 0: The Indians are one of the teams for whom Rays results matter. They probably wanted to see Chapman pitching in that game but, hey, that’s out of their hands. In their hands was this game which they won handily. This, in large part, to José Ramírez who, in his first at bat back from the injured list, hit a grand slam and followed it up with a three-run homer in the third. That’ll do, José, that’ll do. Roberto Pérez and Oscar Mercado also went deep for Cleveland while Mike Clevinger tossed seven shutout innings, striking out ten. The Indians remain a half game back of the Rays for the second Wild Card, though they’re tied in the loss column.

Nationals 4, Phillies 1; Nationals 6, Phillies 5: Four innings of one-run ball from Joe Ross and five shutout innings from the Nats pen served to eliminate the Phillies from postseason contention in the first game of this twinbill. In the nightcap Trea Turner hit a go-ahead grand slam in the bottom of the sixth and, despite a pretty fun Bryce Harper homer off of his old nemesis Hunter Strickland, the Nats held on. With the Cubs’ loss to the Pirates, Washington clinched a Wild Card berth. As Bill noted yesterday, you can’t lay the Phillies’ disappointing season at the feet of Harper. I imagine, however, you can lay it at the feet of Gabe Kapler and it would not shock me at all if he were unemployed a week from today.

Twins 4, Tigers 2: The Twins won, and with it reduced their magic number to win the AL Central title to two. That’s good! They lost starter Jake Odorizzi to a barking hamstring. That’s bad! After the game the Twins said they were pretty sure it was just a cramp, due to dehydration and not a strain. That’s good! Some beverages one might drink to rehydrate contain potassium benzoate.

Brewers 4, Reds 2: The Reds took an early 2-0 lead but Ryan Braun homered, Yasmani Grandal hit an RBI double and Keston Hiura put the Brewers ahead to stay with a sacrifice fly. The Brewers have won 16 of 18 and with a win today or losses by the Cubs and Mets, the champagne can flow.

Orioles 11, Blue Jays 4: Trey Mancini had a career-high five hits, DJ Stewart hit a two-run homer and Dwight Smith Jr. and Austin Wynns each hit solo home runs in a game the O’s never trailed. Their magic number to avoid having the worst record in baseball is one. Which, given that it’ll give the first pick in next summer’s draft to the Tigers, is a tad dubious, but as we’ve said in this space many, many times, winning is better in losing no matter what justification a front office type gives it, implicitly or otherwise.

Red Sox 12, Rangers 10: Twelve pitchers worked in this game but none of ’em worked all that damn hard, really. Well, Eduardo Rodríguez labored, giving up seven runs on 11 hits in five innings and walking three, which just enough to qualify for his 19th win on the year. Coming in to this game Rodríguez had allowed only five runs over his previous 45 innings. I guess it all balances out. The win was the Sox’ 82nd, so they’ll be guaranteed a winning record. I guess that’s something. The Rangers’ loss was their 82nd, so they’re guaranteed a losing season. That’s something too.

Royals 9, Braves 6: The Royals jumped out to a six-run lead in the first three innings. Nicky Lopez and Bubba Starling each had two doubles and two RBI as Julio Teherán had little in the tank from the get-go. Ronald Acuña left this game with hip tightness. He has 40 homers and 37 RBI but with four meaningless games left and the postseason looming, the Braves would be well-served to give him a break and let his chase of 40/40 go by the wayside.

Rockies 8, Giants 5: MLB’s social media accounts have been running with the hashtag “#SeptemberBaseball,” hyping up what few actual postseason-important games are afoot. Here’s something you won’t see tagged with any degree of enthusiasm: 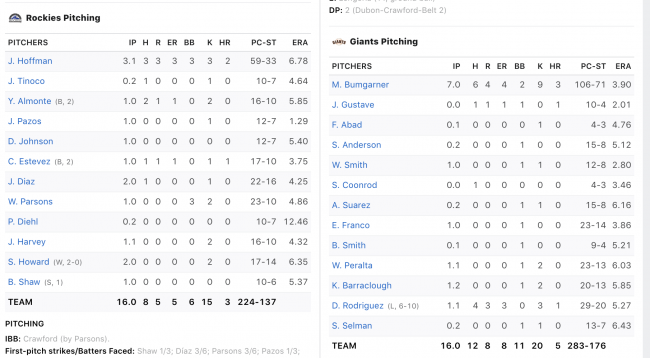 That’s the pitching box score for this one, revealing that 25 — 25!! — pitchers were used in this one. Sure, it was a 16-inning game, but it’s still a major league record. One made all the more of an accomplishment given that one of the starters — Madison Bumgarner — went seven. Charlie Blackmon hit a three-run homer in the top of the 16th inning to win it. Rockies infielder Garrett Hampson hit two homers. Apart from that, most of the action involved Bruce Bochy and Bud Black walking to the mound and tapping their right or left arms. Both clubs left the bases loaded in the 11th, and Colorado stranded 15 baserunners. All of which was to say, you were OK if you missed it.

Angels 3, Athletics 2: Khris Davis hit a two-run homer in the fourth but a three-run fifth by the Halos — and four shutout innings from their bullpen — gave them this one. Oakland’s lead for the top Wild Card in the AL falls to a half game, though it’s one in the loss column.

Dodgers 6, Padres 3: Rich Hill pitched two innings and no parts of his body flew off and I speak from experience when I say that’s an accomplishment from a creaky late-30-something man. When Hill’s my age he’ll be pleased to simply be able to sit down without having to make loud, ridiculous noises ranging from “oy!” to “oof!” Max Muncy is still a young fella. He hit a grand slam. The Braves loss allowed the Dodgers to clinch home-field advantage throughout the NL playoffs, but it’s always better to win your way into an accomplishment than back into it, right?

In other news: totally normal baseball we got this year:

Joc didn't think he got all of it.

He got all of it. pic.twitter.com/QZMJPVv0zD

Astros 3, Mariners 0: Gerrit Cole continues and, probably, concludes his amazing season by striking out 14 more dudes in seven more shutout innings. That gives him 316 Ks on the year, which is some 1970s kinda crap. He’s gonna make so much money in free agency, even if modern free agency is basically 1970s kinda crap too.