Red Sox 6, Phillies 3: Christian Vázquez homered twice, one of which was a grand slam, accounting for five of the six Boston runs. They sweep the two-game series and have won three in a row overall. That’s nice, but I think the AP gamer’s mention that “Boston began play on Sunday trailing Tampa Bay by 10 games for the AL’s second wild card” is a tad superfluous at this point. Maybe everyone forgot how to talk about the Red Sox playing almost completely meaningless games?

Blue Jays 6, Yankees 4: Randal Grichuk homered twice and knocked in four as the Jays win on a day when both teams made it a bullpen game. At least on this day the Toronto bullpen was better, though the Yankees aren’t totally sad here seeing as though both Dellin Betances and Jordan Montgomery made their season debuts. Montgomery didn’t pitch too well. Betances threw only eight pitches but still struck out two dudes.

In addition to the Yankees being in Toronto this past weekend, so too were my parents, as they are on a ten-day driving vacation around Canada. I’m watching their cat and getting their mail and stuff. My dad called me yesterday to tell me that “the traffic in Toronto is TERRIBLE” and to ask, rhetorically, “how in the hell do people deal with the metric system?” Given that my dad has spent the vast majority of his 76 years on this planet living less than 100 miles from the Canadian border — and much of that living within bike-riding distance — given that he has traveled into and through Canada many, many times, and given that he spent his entire career in a scientifically-oriented field, neither Canada nor the metric system should be all that disturbing to him, so I’m gonna chalk it up to age. And that’s the case even if traffic in Toronto is terrible.

Now, where were we? Ah, baseball:

Indians 7, Twins 3: The Indians salvaged one in the three-game series and now trail the Twins in the Central by four and a half games, but with no more head-to-head matchups between these two they really needed a sweep or at least two of three. Roberto Pérez hit a three-run homer as part of a four-run rally in the sixth. Eddie Rosario homered twice from Minnesota and Miguel Sanó and LaMonte Wade Jr. went deep as well. Rosario’s first was his 30th on the year and now the Twins have four guys who have hit at least that many this season. They’re the first team since the 2009 Philadelphia Phillies to have pulled that off.

Nationals 7, Braves 0: The Braves clinched a postseason spot on Saturday but you can’t blame this one on a hangover lineup as just about all the regulars started. They just got whupped. Aníbal Sánchez spun a beauty against his old mates, allowing only three hits over seven shutout innings. Howie Kendrick homered and drove in three.

Orioles 8, Tigers 2: The second-worst team in baseball takes two of three from the worst team in baseball. Seems about right, I suppose. Probably a “victory” for the Tigers, though, right? As it gets them closer to the number one overall pick. A top overall pick all manner of teams who have been excellent for years haven’t had in decades, so maybe tanking in baseball is dumb. I dunno. I don’t know much about Spencer Torkelson. Maybe he’s the one player who can single-handedly turn a franchise around. Anyway, Asher Wojciechowski won for the first time in eight starts, allowing two runs and eight hits in five innings. Rio Ruiz hit a tie-breaking homer. Less than two weeks to go of this cursed season for each of these teams.

Astros 12, Royals 3: An unsurprising sweep. Josh Reddick hit a two run homer, had five hits and drove in three on the afternoon. Abraham Toro drove in three as well. Kyle Tucker hit a two-run homer. Yuli Gurriel hit a solo shot. It was the Astros’ 98th win, which ties them with the Yankees for the most in the bigs.

Brewers 7, Cardinals 6: The Brewers were down 4-3 and were down to their final strike in the top of the ninth inning when Ryan Braun smacked a grand slam to give them a three-run margin. It’d be a margin they’d need, too, as the Cards rallied for two themselves in the bottom of the ninth before coming up just short. All three of the baserunners Braun knocked in via that salami drew walks, by the way. That’s the kind of thing that takes years off a manager’s life. It was Milwaukee’s ninth win in ten games.

Cubs 16, Pirates 6: A three game sweep thanks to 16 runs yesterday — and 47 runs in the three games — is pretty crazy, but losing Anthony Rizzo to a sprained ankle is rough stuff. Kris Bryant homered twice and Ian Happ, Kyle Schwarber and Jonathan Lucroy each went deep themselves. The Cubs are hanging on by one game over the Brewers.

The Pirates, meanwhile, maybe committed the worst error of the season in this one:

Athletics 6, Rangers 1: Sean Manaea tossed six shutout innings and also forgot both the buttons to his jersey and an undershirt: 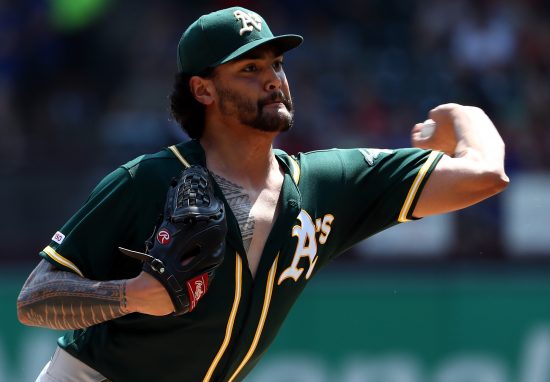 Hey, that chest piece ain’t gonna show off itself. Marcus Semien and Matt Chapman each homered. Neither of them decided to go with the 70s swinger look, however. Our loss.

Rockies 10, Padres 5:  Ryan McMahon homered twice and drove in four to give the Rockies the sweep and their fifth win in seven games. It was the Padres’ 81st loss, ensuring a non-winning record on the year. Which, yeah, will be a losing record given that they’re highly unlikely to win their final 13 games. The future looks bright but the present is still dim for San Diego.

Giants 2, Marlins 1: For non-divisional opponents it sure feels like these guys have played each other 19 times this year. Alas, it was only six, but the mind is a funny thing sometimes. Johnny Cueto tossed five shutout innings in his second strong start after coming off the injured list. Mauricio Dubón homered. Mike Yastrzemski scored the go-ahead run on a wild pitch.

Angels 6, Rays 4: Albert Pujols hit a three-run homer and drove in four on the day. The old man still’s an artist with the Thompson. Sometimes anyway. The Angels snapped a six-game losing streak. They also lost Mike Trout for the remainder of the season after learning that he’d need foot surgery, but it’s been a hell of a season for him, he should still win the AL MVP, even if a bunch of columnists crank out columns to the contrary this week that, secretly, they don’t even believe themselves.

Reds 3 Diamondbacks 1: Eugenio Suárez hit two of three Cincinnati homers to tie him with Pete Alonso for the MLB lead at 47. The two RBI also gave him an even 100 on the year. I think Suárez is a hell of a player, but I also think that we’ll look back at 2019 and its insane home run rate and hold up the 50 homers or whatever he ends up with as a symptom of the broader disease. He’ll be the 1987 Brook Jacoby of the New Rabbit Ball Era. Even if he’s a better player than Brook Jacoby was.

Mariners 11, White Sox 10: Chicago was up 10-5 after seven and a half when Kyle Seager singled in a run to make it 10-6, Kyle Lewis hit a three-run bomb to make it 10-9 and then Mallex Smith singled in a run to tie it up. After the M’s held serve in the top of the ninth José Ruiz of the White Sox gave up two singles — one of them to Lewis — and then intentionally walked a guy to load the bases with one out. He got Tom Murphy down one ball and two strikes, Murphy worked the count full and then ball four gave the M’s a walkoff walk. Lewis finishes his first week in the bigs having gone 9-for-25 with four homers, two doubles and nine driven in in six games. Not too shabby.

Dodgers 3, Mets 2: Zack Wheeler pitched brilliantly for seven innings and the Mets led 2-1 into the eighth, but they couldn’t hold it beyond that. Chris Taylor doubled in Jedd Gyorko to tie it up at two and, an inning later, Gyorko singled in Kiké Hernandez to put the Dodgers over. L.A. takes two of three in a series the Mets really needed to win.

Two weeks to go. Every game looms large for the contenders now.