Braves 3, Phillies 1: Dallas Keuchel was fantastic again — he’s on a hell of a roll right now — allowing one run over six innings. Tyler Flowers‘ three-run homer was all the offense the Braves got and, ultimately, needed.

Orioles 7, Dodgers 3: The Dodgers’ hangover lineup and bullpen played about how you’d expect them to play the day after spraying beer and champagne all over each other. Jonathan Villar hit a three-run homer for the Orioles that proved to be MLB’s record-setting 6,105th homer of the season. Still two and a half weeks to play too. We’ve seen an average of 1.4 home runs per game this year. In 2017 it was 1.26 per game. Back in 2000 — the high point of the PED era — it was 1.17 homers per game.

Blue Jays 8, Red Sox 0: Four Jays pitchers combined for a two-hit shutout, with Trent Thornton doing most of the work, coming into the game in the third inning and blanking the Sox for five. Teoscar Hernández and Rowdy Tellez homered. Boston, who appears to have given up on the season, has lost five straight.

Mets 9, Diamondbacks 0: Steven Matz tossed six shutout innings, three relievers finished the job, Todd Frazier and Jeff McNeil each hit two homers and Brandon Nimmo hit one as the Mets win in a rout. They finished the game — played on 9/11 — with nine runs and eleven hits. I’m too lazy to insert the Richard Dreyfuss/mashed potatoes picture, but just imagine it’s here. I’m not too lazy to link what Hunter S. Thompson wrote over at ESPN2 on the night of 9/11/01, which for my money was about as dead damn spot-on a piece as anyone wrote at the time and holds true 18 years later. Yeah, it was on a sports site. The Good Doctor did not stick to sports even though he came up as a sports writer and, late in life, once again fancied himself a sports writer, God bless him.

Brewers 7, Marlins 5: Tied at five in the top of the ninth until Mike Moustakas hit a two-run homer to put Milwaukee over. It was his second two-run shot of the evening because, apparently, everyone hits two homers in game these days. The Brewers are keeping themselves in the playoff hunt even without Christian Yelich. Which makes me wonder what happens if they do beat out the Cubs for the Wild Card. Does that cause Yelich to actually lose MVP votes? Would the voters who use the “how screwed would the team be without him” reasoning actually be more likely to throw their support to Yelich if Milwaukee doesn’t make the postseason, on the basis that his key value was proven? I don’t have an MVP vote because the BBWAA is afraid of me, but if I did I don’t think I’d make it that complicated.

Nationals 6, Twins 2: Stephen Strasburg picks up his 17th win of the year after going six and allowing two in a workmanlike performance. Three shutout innings from the Nationals’ pen was just as impressive given how three innings of Nationals relief pitching is capable of going. Ryan Zimmerman and Trea Turner homered for the Nats. Zimmerman drove in three. Zimmerman leads the Nats in almost every hitting category, all-time. Sometimes a guy like that will get the nickname “Mr. [team name].” I don’t know if we can call him “Mr. National” though, because that sounds like a lame superhero name. Maybe not a mainstream superhero but perhaps one from one of those “imagine if superheroes were real” series in which the heroes were given sort of generic washes on broader hero archetypes. Sort of like how Homelander in “The Boys” is Superman gone wrong or what have you. “Mr. National” could be a riff on evil Captain America.  Coming this fall, only on Netflix.

Rangers 10, Rays 9: The Rangers led 7-2 after the first inning but blew that by the fourth to trail 8-7. In the seventh Rougned Odor came up and popped a three-run homer to put Texas back on top for good. Fifteen pitchers in a 10-9 September game that lasts over four hours is basically the platonic ideal of “Games Craig Hates to Even Think About Let Alone Recap” and for that reason I’m stopping now.

Indians 4, Angels 3: Carlos Santana homered in the first, Kevin Plawecki knocked in a run with a ground rule double in the second and then two batters later Francisco Lindor hit a homer scoring both himself and Plawecki. That was it for the Indians’ scoring but that’s all they needed as seven Cleveland pitchers combined to give up only three runs on seven hits. One of those relievers was Carlos Carrasco, who picked up the win.

Royals 8, White Sox 6: Jorge Soler hit two homers and had four hits in all. It was the third time this year Soler has homered more than once in a game. Adalberto Mondesí, Bubba Starling and Ryan O'Hearn also all went deep for Kansas City. Eloy Jiménez homered and drove in four runs for the Chisox.

Athletics 5, Astros 3: I see these guys decided to bring pitchers to the ballpark last night. Good choice for once. One of the pitchers the A’s brought was Jesús Luzardo, who made his big league debut and looked pretty good doing it, allowing one run in three innings in relief, with his only mistake a gopher ball to Martín Maldonado. Otherwise it was nasty stuff and swings and misses. He’s gonna be a good one. In other news, Sean Murphy and Marcus Semien homered. Astros starter José Urquidy was sharp, striking out ten in five innings, but the Astros’ bullpen wasn’t.

Rockies 2, Cardinals 1: These teams have combined to score a grand total of six runs in two games in Coors Field this week. The rest of baseball is playing on the moon but these guys are in the most offense-friendly ballpark in the history of the world and they’re cosplaying like it’s 1968. What a wild game baseball can be sometimes. Antonio Senzatela allowed one run over six and Ian Desmond hit a go-ahead home run in the sixth to give the Rockies the game. Afterwards they all went back home and watched “The Glen Campbell Goodtime Hour,” “The Beverly Hillbillies,” and “Green Acres.” Those who stayed awake watched “Hawaii Five-O.” Wednesdays on CBS were lit back then. At least until The Rural Purge.

Pirates 6, Giants 3: You know your season is going well when the AP gamer puts a sentence like “Felipe Vazquez earned his 27th save two days after punching Kyle Crick in the clubhouse,” up high. I guess you go with what you got. It’s hard to write up a summary of a game involving two teams playing out the string who combined to use 36 players, none of whom had a stat line good enough to justify a lede. I’m so damn lucky I don’t have to write straight gamers and can, instead, talk about the 1968-69 network TV schedule. For example, I can note how on Thursday nights ABC ran a show called “The Ugliest Girl in Town” as the lead-in for “The Flying Nun,” “Bewitched,” and “That Girl.” You know some ABC exec was proud of himself for his “Girlie Thursdays” or whatever the hell someone might’ve called it in 1968.

Timothy Blair is a Hollywood talent agent. He falls in love with Julie Renfield, a British actress who is visiting the United States to do a movie. After the movie is finished, she returns to England. To help his brother Gene complete a photography assignment, Timothy dresses as a hippie and poses for a photo shoot. The photos are sent to a modeling agent in England who assumes they are of a woman. He offers “her” a job.

Knowing this would be the only chance to go to Great Britain and be with Julie, Timothy accepts and dubs himself “Timmie”. Timothy has two weeks of vacation to spend as much time with Julie as he can, but when he is about to leave with his brother, Gene loses £11,000 gambling. This, coupled with the fact that the talent agent discovers the brothers’ ruse and demands to recoup his investment, means Timothy has to continue being Timmie for a while longer.

The Wikipedia page has this promo of the lead actor, Peter Kastner, as “Tim” and “Timmie”: 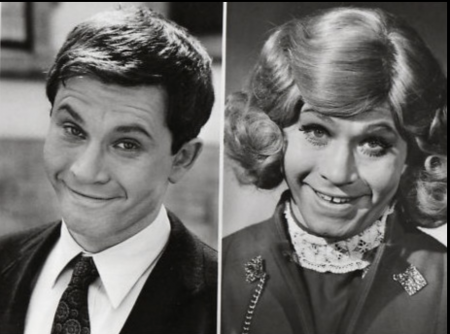 The show lasted 20 episodes but only 17 aired. I can’t for the life of me imagine why. A little over a decade later, of course, Tom Hanks would be propelled to stardom in “Bosom Buddies,” which was really the same riff, so what the hell do I know? Hollywood is messed up, man.

Padres 4, Cubs 0: Chris Paddack was strong, tossing six shutout innings and striking out seven. Cubs batters only mustered three hits in all in the whole dang game. Manuel Margot homered for the Friars.

Mariners 5, Reds 3: Sonny Gray was tossing a no-hitter into the seventh but rookie Kyle Lewis broke it up with a three-run homer, turning Gray’s would-be no-no into a loss. Lewis has now played two big league games and has homered in both of ’em. The M’s would tack on two more in the eighth.

Yankees vs. Tigers — POSTPONED: I usually put rain-related songs on postponements, but I’m inspired to do something else here: