We had only a half-schedule in Major League Baseball last night, but there were postseason implications all the same:

Braves 7, Phillies 2: Mike Foltynewicz is really — finally — rounding into form and is doing so at the perfect time. He tossed seven innings of one-run ball, striking out seven, while Ronald Acuña and Josh Donaldson each homered. Feel like I’ve written that dozens of times this year. The Braves reduced their magic number to clinch the NL East to 10 with 17 games remaining.

Mets 3, Diamondbacks 1: Jacob deGrom had a very Jacob deGrom-y night, allowing one run on three hits over seven and striking out 11 and Pete Alonso had a very Pete Alonso-y night, smacking two homers to bring him up to 47 on the year. He now leads all of baseball in dingers and is five back of Aaron Judge‘s all-time rookie home run record.

Yankees 5, Red Sox 0: This one started emotionally, with David Ortiz throwing out the first pitch in his first appearance at Fenway Park since being shot. That was the sole highlight for Boston, though, as James Paxton shut them out into the seventh to win his eighth straight start and three relievers finished the job. Austin Romine and Gio Urshela homered for New York. With that, the season series between these two clubs is over. In the end the Yankees took 14 of 19 from the Red Sox. The last time they won a bigger percentage of games against Boston was in 1980, when they took 10 of 13.

And now a lesson about how big a clubhouse and how any single reporter can’t ever really say, with confidence, that they know, universally, what’s being said in said clubhouse: 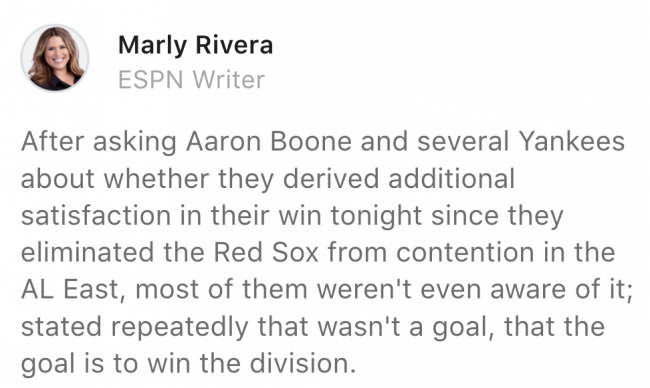 “Absolutely, it’s awesome,” Paxton said. “We feel really confident as a team right now and it feels great to knock those guys out.”

Brewers 8, Marlins 3: Trent Grisham had five hits and drove in two runs. He also made me realize that, though it’d be a different person, if the author John Grisham does have a son, his name is 93% likely to be “Trent Grisham.” Yasmani Grandal hit a two-run homer and Lorenzo Cain had three hits. The Brewers have won four in a row.

Astros 15, Athletics 0: Around the time the Astros traded for Zack Greinke I gently pushed back against the sentiment that they were guaranteed to win the World Series simply by virtue of that move. Not because I was down on them so much as I’m simply aware of the fact that there are NO guarantees in baseball. Part of that pushing back was a concern about the offense which, at the time, was just starting to get back several pieces which had been banged up in the first half of the season and for which there were likewise no guarantees of a total resurgence. As a result of that banged up offense Houston stood, at that moment, in fourth place in runs scored in the American League. In trying to communicate that concern of mine I ill-advisedly said they had “the fourth best lineup” in the AL which is not quite the same thing. Astros fans have been periodically giving me hell since then for my misstatement that, quite understandably, came off as kinda dumb.

Welp, after the last two games I’m pretty sure they’re gonna continue to do that. And that’s fine, because there is no doubt whatsoever about the state of the Astros offense: it’s terrifying.

They scored 21 against the Mariners on Sunday and last night put up another couple of touchdowns and a two-point conversion to boot. They scored six times in the first inning, five times in the second inning and put up a three-spot in the seventh. They hit seven home runs, with Yordan Álvarez and Ronbinson Chirinos hitting two of them a piece. Six of those dingers came in the first two frames, which set a Major League record for dingers in two innings.

Yah, I think that first half sluggishness is a thing of the distant past.

Pirates 6, Giants 4: The Pirates rallied for four runs in the ninth to turn 4-2 deficit into a 6-4 win. Kevin Newman hit a two-run single to tie it up, former Giants farmhand Bryan Reynolds hit an RBI single to put the Buccos ahead and José Osuna hit a sac fly. Madison Bumgarner, who tossed seven innings of two-run ball and stood to be the winner before the ninth inning implosion, probably has some opinions about how that all went down. Or else he’s mentally back home sitting in a duck blind or whatever, in his own cosmic November.

Indians 6, Angels 2: Orange County native Shane Bieber returned to Anaheim and did quite well in his homecoming, allowing one run on five hits and picking up the win. There were so many local fans cheering him on that he even took a curtain call, even though he was the visiting pitcher. Yu Chang and Jason Kipnis homered in support.

Cubs 10, Padres 2: Thanks to injuries to Cubs infielders, Nico Hoerner — who has back home in Oakland, his minor league season having ended on September 2 — got to make his major league debut last night, playing shortstop. It was quite a debut, as he went 3-for-5 with a triple and knocked in four runs. Nicholas Castellanos and Kyle Schwarber each homered and Kyle Hendricks picked up the win.