Orioles 2, Nationals 0: I woke up from, well, not a nightmare, but certainly an unpleasant dream early this morning. Kind of an exercise in anxiety, I guess. I was going back to law school. Like, in the dream I had my same experience with having gone from 1995-1998, but for reasons unclear to me I was re-enrolling to do it again. It was back at George Washington in D.C. too, which is where I went in real life. No one in the dream thought this was odd, but I kept telling everyone how dumb it was that I had to be back. One administrator, while giving me a tour of the place and telling me where the study rooms were and stuff, tried to make me feel better about by saying “hey, when you were here before you didn’t have any baseball, but now we have the Nationals!” That did help a little I guess. It didn’t explain, however, why in 2019 I was once again married to my ex-wife, but I suppose there is only so much you can do when your brain is intent on giving you an anxiety dream.

That had nothing to do with this game, in which Aaron Brooks shut down the Nats lineup for six shutout innings with four O’s relievers completing the job of a four-hit, 11-strikeout shutout. I wonder if I saw this score before I went to sleep last night without remembering it, though, and that dream was my brain’s way of trying to reconcile it all. Who knows?

Cardinals 6, Brewers 3: The Cardinals continue to play John Getz as Ray to the Brewers’ Dan Hedaya as Marty. You know, burying them? What, not “Blood Simple” fans? Jesus. Youse fancy pantses, all o’ yuz.

Anyway, Yadier Molina hit two homers so send the Cardinals to their sixth straight win and their 15th of their last 18, while the Brewers dropped their third in a row and fell six and a half back. To add insult to injury, this game experienced a rain delay despite the fact Miller Park has a roof. Remember: roofs are only useful if you close them:

This happened once before, back in 2012. At least they try to play games with the roof open as much as possible in Milwaukee.

Dodgers 9, Padres 0: Walker Buehler tossed six innings of 11-strikeout shutout ball while Joc Pederson‘s third inning homer and A.J. Pollock‘s ninth inning homer bookended five runs scored on RBI singles and two more scored on an RBI double. Nine-zero is, as I often note, the forfeit score. They could’ve just agreed to forfeit this one before it started and all gone to see Bryan Ferry and whatever backup band he now calls Roxy Music play at the Symphony Hall in San Diego last night. My brother went and said that for a guy his age Ferry still puts on a good show. Though I’m not sure I really wanna hear a 70-something guy sing “Love is the Drug,” the rest of the show would’ve probably been more entertaining than this blowout.

Pirates 5, Phillies 4: Rhys Hoskins has had a nightmare month of August at the plate and last night it continued in the field. It was tied at four in the ninth and the Pirates had a couple of men on with one out. Kevin Newman of the Pirates hit a grounder to second baseman César Hernández that should’ve been a tailor-made double play. He flipped it to Jean Segura for the force at second and Segura threw to Hoskins down at first for what should’ve gotten Philly out of the inning. Nope. Hoskins just failed to catch it, closing his mitt too early. The ball clanked off his leather and rolled away as Adam Frazier of the Pirates ran home for what proved to be the winning run:

I wish could tell you that Philly fans didn’t boo the hell out of Hoskins for that. I wish I could. But Philly is no fairy-tale world. And not everyone booed. Some just responded with despair: 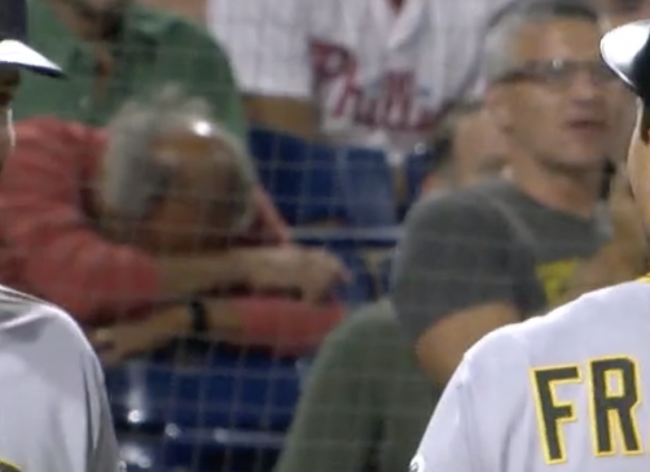 Blue Jays 3, Braves 1: Johnny Wholestaff — seven pitchers in all — combined to out-duel Canada’s own Mike Sorkoa in Toronto, limiting the Braves to one run on seven hits. How rude. Or maybe it’s just a testament to the politeness of Canadians. Soroka knew that if he beat the Jays that thousands of Toronto fans would go home unhappy and that wouldn’t be very kind. I’m going to go with that. Justin Smoak, a rude American, homered and drove in two.

Cubs 5, Mets 2: Yu Darvish made some adjustments a month or so ago and they’ve been pretty swell adjustments. Last night he went eight, allowing only one run on five hits, striking out seven and walking only one. Over his last ten starts he’s walked only three guys and has struck out 78. Indeed, the one walk here broke a streak of 142 batters faced without a free pass issued. Yah, I think that’s good. Javier Báez homered and drove in three. That’s pretty good too.

Indians 10, Tigers 1: Cleveland put up a six-run seventh inning that ended the competitive portion of this contest. Franmil Reyes hit a three-run homer and Cleveland won its 12th straight over the Tigers. Maybe it’s a Michigan-Ohio thing, because it’s almost as if Jim Harbaugh is managing Detroit when they play Cleveland.

Reds 8, Marlins 5: Curt Casali homered, had an RBI single and drove in three while Eugenio Suárez homered and had three hits in all. Nick Senzel had a two-run homer as well. Maybe the Reds were just in a good mood because manager David Bell let them skip batting practice and show up at the clubhouse two hours before the game. A little extra time hanging around Miami is probably more fun than the 133rd round of batting practice of the season.

Twins 3, White Sox 1: Michael Pineda allowed one over five and four Twins relievers combined for four no-hit innings to close it out. Marwin Gonzalez and Jonathan Schoop went deep for the Twinkies. Minnesota maintains its three and a half game lead over the Tribe.

Astros 15, Rays 1: Charlie Morton returned to face his old mates and it didn’t go all that well for him, as he coughed up six runs on seven hits in four innings of work. The Astros bats kept on pounding Rays pitching after he left too, scoring off all three pitchers who followed Morton and ending up with 15 runs on 18 hits. Yordan Álvarez homered twice and knocked in four. Jake Marisnick, Yuli Gurriel and Robinson Chirinos knocked in two runs a piece. Justin Verlander was pitching fine but his now week-long case of the red ass got the best of him and he was ejected for barking at the home plate umpire over balls and strikes. Hey, at least he’s talking now.

Athletics 2, Royals 1: Mike Fiers outdueled Mike Montgomery for the time in which they both were in the game, with an unearned run being the only thing to really separate them. Though, really, Montgomery should get partial blame for that unearned run. Yeah, a base runner reached on a fielder’s error in the first, but Montgomery walked in a run with the bases loaded, and no one made him do that. Marcus Semien‘s RBI single in the second was a cleaner affair.

Diamondbacks 3, Giants 2: Mike Leake allowed two runs while pitching into the eighth to earn his first win as a Dback. A Ketel Marte homer and RBI singles from Adam Jones and Christian Walker backed him up. Marte had to leave the game after the homer because he got a leg cramp during his trot. Which, well, that’s kind of embarrassing. At least it seems that way until I remember that I get leg cramps in the middle of the night while sleeping sometimes, which is why I eat bananas every day. Hi, I’m Craig and I’m, apparently, 74 years-old.

Angels 5, Rangers 2: Andrew Heaney struck out ten and allowed only an unearned run in six innings and was more than matched by six shutout frames from Mike Minor. The seventh changed everything, though, when Kole Calhoun doubled in two and Brian Goodwin singled in two more. Mike Trout hit a solo homer in the ninth for some insurance. The homer was Trout’s 43rd and gave him his 100th RBI on the season.

Yankees 7, Mariners 0: Masahiro Tanaka rebounded from his last, not-so-great outing to put up seven shutout innings, allowing only three hits while striking out seven. Aaron Judge and Brett Gardner hit two-run and three-run homers, respectively. It was Judge’s 100th career dinger. Judge — who needed 371 career games to get there — is the third-fastest player to 100 homers in history, trailing only Only Ryan Howard (325 games) and teammate Gary Sanchez (355 games) in the fewest games played to reach the milestone. Of more immediate importance, Judge is heating up, having hit his fourth homer in his last five games.