Orioles 8, Rays 3: Anthony Santander went 5-for-5 with a homer, Renato Núñez had two hits and drove in three, Jonathan Villar homered, and DJ Stewart had three hits. The Orioles take the last two of the four-game series to earn the split. The Rays look really great sometimes. Then they look like crap for a couple of days. Right now they’re holding on to the second Wild Card by a mere half game.

Braves 2, Mets 1: The sweep. And a now eight-game winning streak for Atlanta. Dallas Keuchel tossed seven shutout innings while Josh Donaldson hit two solo homers. The first one allowed him to taunt a Mets fan in the process:

.@BringerOfRain20 gave an autographed bat to a Mets fan near the on-deck circle. @KelsWingert explains why: pic.twitter.com/SQU3kJxGS5

Atlanta continues to lead the NL East by six games. The Mets are 12 back and two back in the Wild Card.

Yankees 5, Dodgers 1: Clayton Kershaw struck out 12 Yankees but he also gave up three home runs, with D.J. LeMahieu, Aaron Judge and Mike Ford all hitting solo shots. Meanwhile his counterpart Domingo Germán allowed only one run over six and four Yankees relievers combined for three shutout frames to end it. Judge’s homer came after he promised the father of the Yankees’ bullpen coach Jason Brown:

A man of the people @TheJudge44 pic.twitter.com/8uDeuD3lBs

That’s not something you see every day, eh? Something else you don’t see very often is the Dodgers dropping two of three at home, but that’s what happened, thanks in part to nine Yankees homers over the weekend. Here’s what Aaron Judge’s looked like, in photographic form: 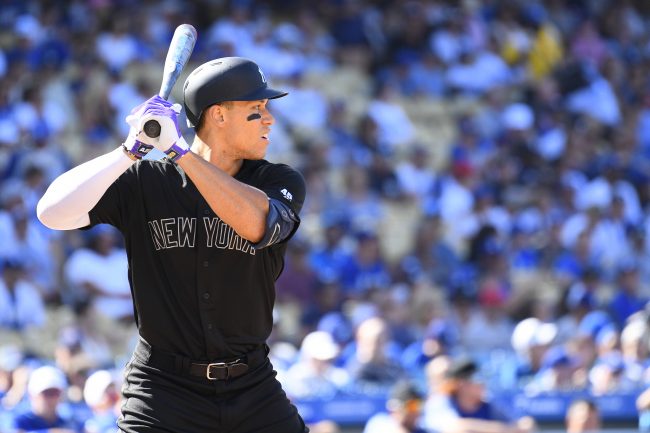 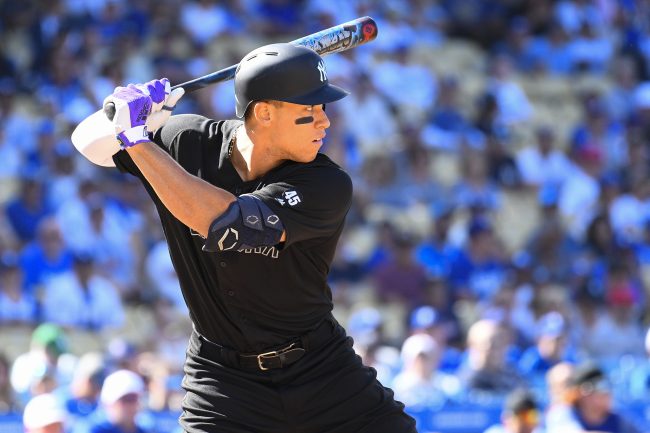 Royals 9, Indians 8: Cleveland came back from three-run deficit to tie things up in the seventh and then fell behind by five runs a mere inning later. They came back from that too, plating five in the eighth and ninth, thanks to three homers — a solo shot from Francisco Lindor and both a solo shot and a three-run homer from Franmil Reyes — to tie it up at eight and force extra innings. Momentum, schmomentum: the Royals’ Ryan O'Hearn hit a solo homer in the top of the 10th to end the scoring and, three Indians outs later, the game. Something of a gut-punch loss for Cleveland, on a day they lost one of their big bats to injury. They’re probably glad every day is not like Sunday. Come, Armageddon, come.

Marlins 3, Phillies 2: Rhys Hoskins hit a two-run homer to stake Aaron Nola to a 2-0 lead in the top of the sixth. Apart from Hoskins’ blast there was nothing doing, though, as four Miami pitchers, led by Elieser Hernández, combined to allow only four hits and one walk to Philly batters. The Marlins got all of their runs in the bottom half of the sixth, with Jon Berti hitting an RBI single and Starlin Castro smacking a two-run double. Teams that have playoff pretensions probably don’t wanna drop two of three to Miami.

Pirates 9, Reds 8: Likewise, teams that wanna have self-respect probably don’t wanna drop all three games of a three-game series to Pittsburgh. Trevor Bauer was beat up for eight runs — seven earned — in only three innings. Since coming to the Reds he’s 1-3 with a 7.62 ERA in five starts. Bryan Reynolds hit a bases-loaded triple. Kevin Newman went 4-for-4, was hit by a pitch and stole two bases. Starling Marte‘s hit an RBI double with two outs in the eighth to give Pittsburgh a two-run lead. They’d hold on by one.

Astros 11, Angels 2: This was a 2-1 game until the seventh, believe it or not. That’s when Martín Maldonado hit a two-run homer. Still, 4-1 in the eighth is not an insurmount— ah, screw it. Houston plated seven runs in the eighth to make it a laugher. Alex Bregman doubled in a run that innings, followed by Abraham Toro singling in one, Yordan Álvarez coming home on a wild pitch, Josh Reddick doubling two guys in, and José Altuve hitting a two-run homer. Houston sweeps the Angels in three and has won four in a row overall.

Diamondbacks 5, Brewers 2: Robbie Ray pitched five scoreless innings while Eduardo Escobar and Christian Walker each homered to help the Dbacks avoid a sweep. The Brewers remain two back of the Cubs and four and a half back of the Cardinals because . . .

Nationals 7, Cubs 5: . . . Chicago got swept in a three-game series by the hot Nationals, who have taken five in a row. Anthony Rendon was the big bat here, as he homered and had four hits overall including an RBI single in the 11th inning. Juan Soto had three hits and, though he got the no-decision, Stephen Strasburg struck out ten batters in six innings of two-run work. Shockingly, though, Hunter Strickland and Fernando Rodney could not hold the 5-2 lead to which they were staked, giving up homers to Victor Caratini and Kyle Schwarber, respectively. Not that anyone needs to tell anyone else that relying on Hunter Strickland and Fernando Rodney down the stretch against good teams isn’t the strongest idea anyone’s ever come up with.

Cardinals 11, Rockies 4: The Brewers and Cubs are continuing to battle for second place and second place only at the moment, because the Cards have won four in a row and remain atop the Central. Matt Carpenter — who has been terrible this year — hit a homer, two singles and drew a walk, while Lane Thomas hit a pinch hit homer as they easily beat the Rockies. Colorado has dropped six of seven.

White Sox 2, Rangers 0: Reynaldo López no-hit Texas for five frames but had to leave after that due to some stomach problems. Never fear, though, as four relievers each blanked the Rangers for one to complete a one-hitter. José Abreu was responsible for both of the Chisox’ runs via an RBI single and a fielder’s choice.

Twins 7, Tigers 4: C.J. Cron and Jonathan Schoop homered — Cron’s was a three-run shot — Martín Pérez pitched six strong innings, as Minnesota takes two of three in the series. In so doing they increased their AL Central lead to three and a half games over Cleveland.

Giants 5, Athletics 4: Evan Longoria homered and hit a go-ahead, two-run single late in the game. Donovan Solano — the guy with maybe the most Bay Area name in this Bay Area series — had four hits and an RBI as the Giants took both games of the two-game series. Which, my God, who plays a two-game weekend series? I used to understand the schedule but I really don’t anymore.

Padres 3, Red Sox 1: Manny Machado hit a two-run homer in the first to give San Diego a 3-0 lead. Joey Lucchesi gave up a solo homer to J.D. Martinez in the fourth but that’s all he and four relievers would allow to the Red Sox as they avoid a three-game sweep.

Mariners 3, Blue Jays 1: Marco Gonzalez allowed only one run on three hits over seven and was backed by a Dylan Moore solo shot and an RBI double from the red hot Kyle Seager. Tons of Jays fans come down from British Columbia whenever they play Seattle to make it a near-home game for them. Those who did watched Toronto drop two of three. That’s sad, I guess. But it’s also a reminder that the Blue Jays have an entire country of 37 million people as their market. Keep it in mind the next time they cry poor or act poor as a franchise.