As we wrote about this morning, last night the Houston Astros, at the request of Justin Verlander, barred Detroit Free Press reporter Anthony Fenech from the clubhouse during Verlander’s media availability following the Tigers-Astros game. After Verlander was done talking to the press in the scrum setting — and after a call was placed to Major League Baseball about the matter — Fenech was allowed in.

As we noted, this was done in violation of agreements to which Major League Baseball, the Houston Astros and the Baseball Writers Association of America are parties. The agreements are meant to ensure full access to BBWAA-accredited reporters as long as they have not violated the terms of their credentials.  In no case do the clubs — and certainly not the players — have the right to bar access to BBWAA-accredited reporters. Indeed, the whole point of the BBWAA is to ensure such access and to ensure that teams cannot bar them simply because they are unhappy with their coverage or what have you.

This morning Verlander tweeted, obliquely, about “unethical behavior” on the part of Fenech that led to his request to the Astros to bar him. As we noted at the time, such an allegation — however interesting it might be — is of no consequence to the admission or barring of a reporter. If Fenech has acted unethically it’s a matter between him and his employer and, potentially, between him and the BBWAA. At the very least, if Verlander has a specific concern, it would be incumbent upon him or the Astros to take the matter up with either the Free Press or the BBWAA.

In light of all of this, it’s hard to make a case for Verlander’s request and the Astros’ honoring it. A few moments ago, however, the Astros released as statement on the matter which, basically, says, “so what?” 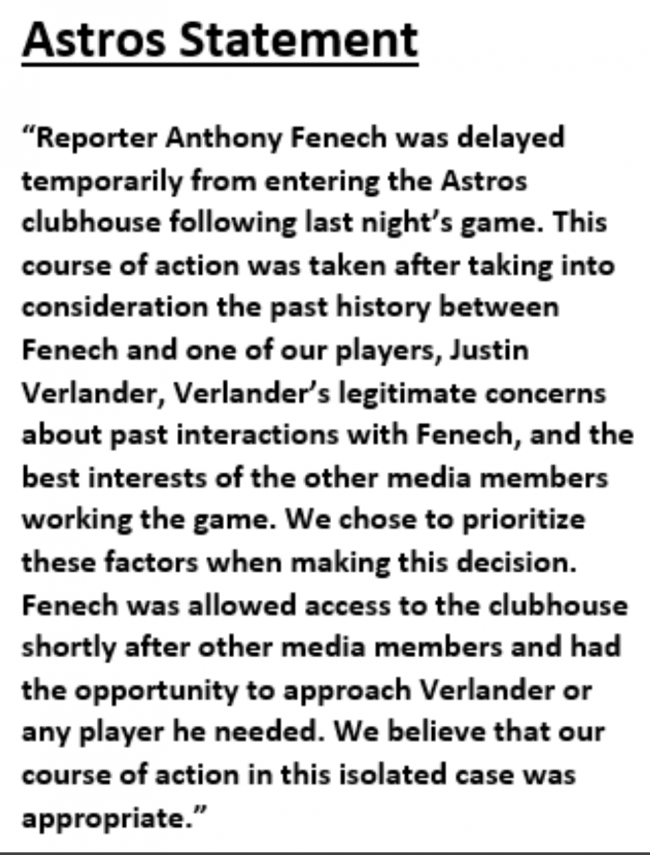 Which is to say, the Astros have made a decades-long agreement between the BBWAA and MLB regarding reporter access optional, because a player does not like a reporter who is covering him.  Someone without the power to alter the BBWAA-MLB relationship has just done so unilaterally. And they have done so in such a way that any player, should they decide they don’t like a reporter, will now presumably rely on it as precedent. Finally, it should be noted that in issuing this statement, the Astros have given at least some tacit credence to Verlander’s thus far unsubstantiated and unspecified allegations of unethical behavior on the part of Fenech, which seems less-than-ideal at best.

It’s your move, Major League Baseball and BBWAA. Whatcha gonna do about it?

“Per our Club-Media Regulations, the reporter should have been allowed to enter the clubhouse postgame at the same time as the other members of the media. We have communicated this to the Astros.”

“The Baseball Writers’ Association of America is alarmed by the Houston Astros’ decision to restrict the clubhouse access of a reporter from the Detroit Free Press after Wednesday’s game against the Detroit Tigers. This action by the Astros violated the MLB club-media regulations, which are laid out in the Collective Bargaining Agreement, and the BBWAA expects MLB to respond accordingly and promptly.”

Given the MLB’s only action so far is to issue a statement which sets forth the obvious — the Astros aren’t allowed to do what they did — I don’t know that I’d have much confidence in the “accordingly” part. I will note, however, that when the New York Knicks did this to a reporter last spring, the NBA fined the team $50,000.