I’m not a religious man and I do not believe in fate or destiny or any grand cosmic plan. I think the cosmos just . . . are, and our existence and our civilization is just a matter of random and improbable happenstance. The stars and galaxies do not know or care about us and neither our good fortune nor the tragedies which befall us matter to the universe one iota. We are but a blip in the space-time continuum and then we are dust. That’s that.

Sometimes, however, I think that, maybe, the universe is out to get us. And that, on occasion, it has it in for me specifically. I thought that this morning, in fact, when I saw this:

The #WhiteSox are excited to partner with @MLB to host the first-ever major-league game at the Field of Dreams in Iowa! This game will be against the New York Yankees on August 13, 2020. pic.twitter.com/hco3e6tCqu

Craig: “Is this Heaven?”

Major League Baseball: “No, it’s a game at the ‘Field of Dreams’ field between the Yankees and the White Sox next year, during which we will, 100 percent guaranteed, revel in every nostalgic aspect of that 1989 film.”

It will be a regular season game on August 13, 2020, and will be considered a White Sox home date. The game will be broadcast on Fox at 7PM eastern time, so we’ll get a nice sunset. No word if, as in the movie, the sun will both set and rise over left field. I never quite understood that, but I suppose it made for some good visuals.

About those visuals: no, they won’t actually be playing on the field you see in the movie, and which has been preserved as a tourist attraction. The dimensions of that are too small. They’re going to have a regulation size field built next to it and will play on it. To wit: 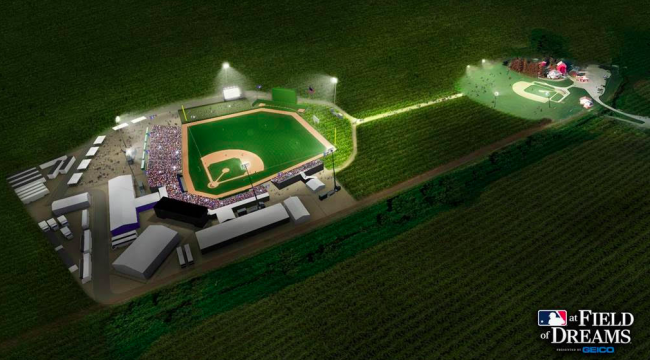 “As a sport that is proud of its history linking generations, Major League Baseball is excited to bring a regular season game to the site of Field of Dreams.  We look forward to celebrating the movie’s enduring message of how baseball brings people together at this special cornfield in Iowa.”

I guess that’s one of the messages of the movie. The much stronger one is that we should revel in nostalgia and subordinate our own interests, passions, values and desires — hell, we should actually repent for them! — to those of the previous, dead and dying generation, whose values are more valuable than our own. But Manfred’s sounds better I guess.

OK, everyone who has been around here for a while knows how I feel about “Field of Dreams.” If you missed that, you can read it here. And no, I don’t care if the movie makes you all misty for your dad. If you can’t commune with those powerful emotions without the help of a Kevin Costner movie I can’t help you.

Jokes aside, I won’t hate on the idea of the game itself, though. It’ll probably be a pretty fun spectacle. Even better, unlike the 1989 movie version, this Field of Dreams game will actually have black and Latino players on the field. Jackie Robinson broke the color line in 1947. The Field of Dreams ghosts are all pre-integration guys.  I imagine that, at some point in the last 30 years, the ghosts managed to break the color barrier too, but who knows?

Terence Mann: “Ray, people will come Ray. They’ll come to Iowa for reasons they can’t even fathom. They’ll turn up your driveway not knowing for sure why they’re doing it. They’ll arrive at your door as innocent as children, longing for the past. ‘Of course, we won’t mind if you look around,’ you’ll say. ‘It’s only $20 per person.’ They’ll pass over the money without even thinking about it: for it is money they have and peace they lack.”

Major League Baseball: “Whoa, Whoa, Whoa. First of all, it’s not $20 a person. It’s probably gonna be $129.99 plus a $39 convenience fee per person. And do not park in the driveway, that’s for MLB VIPs only. There will be a surface lot at the freeway exist with a courtesy shuttle to the park. The “courtesy” thing does not mean it’s free, though. The shuttle will be $20, just like the guy said in the movie.

“Wait, sorry. It’s sold out already. Most of the seats will be filled by stars of next fall’s Fox prime time lineup and family members of Doosan and Camping World executives.”

This is gonna rule. NBC: please send me to this. I promise to cover it fairly and all that jazz and not be a complete and total buzzkill. For serious.