The Home Run Derby goes off tonight at 8PM. As usual, it’ll be on ESPN and streaming at MLB.com. The Derby will have different, higher stakes this year. The winner gets more than just a cool trophy. He gets $1 million.

This year’s Derby also has a younger, fresher look. The field is the youngest ever, averaging 25.26 years-old. Youth in baseball generally means low salary, so these guys may have an added incentive to get that $1 million. Here’s what this year’s participants make right now:

Bregman signed a contract extension and, while $640K is his base this year, he did get a $10 million signing bonus, so his number is a tad misleading. Acuña also signed a $100 million deal that is back-end loaded. Half of the field, though, is one bad injury away from an insecure future. In light of this, MLB and ESPN will probably talk at least a little bit about how GREAT it’ll be for the winner to get that $1 million. They’ll likely dance a tad gently around that, though, as they surely don’t want to emphasize the fact that the league and Derby sponsor T-Mobile are spending more dough as a throwaway promotional expense for their off-day programming than most of the Derby participants make as the game’s elite young players.

That little bit of unseemliness aside, let’s break this baby down, shall we? 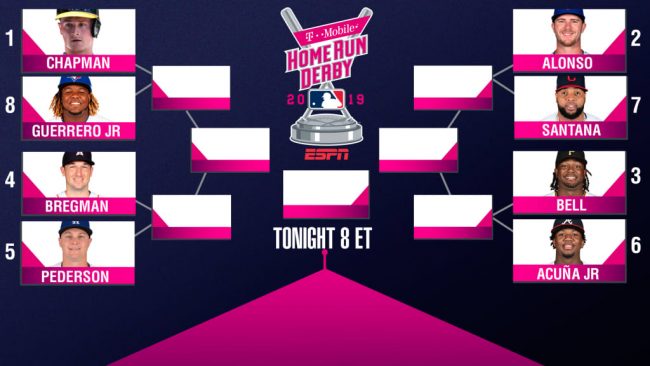 Chapman and Guerrero are both HARD hitters, with some pretty hefty exit velocities when they connect. Guerrero has only connected eight times so far this year which is low for a Derby participant even with his late start to the season. His power is impossible to question, though, and this is batting practice, basically, so it’s not like someone is gonna challenge him with hard sliders on the hands or whatever. Guerrero, who just turned 20 in March, is the youngest Home Run Derby participant ever, by the way. Chapman uses all fields when he goes deep more than anyone in this pool, though, so I feel like that may give him an advantage, even if he was a late fill-in for Christian Yelich.

Bregman is probably the least quintessential power hitter in this field, but he did participate in last year’s Derby, exiting in the first round. I feel like familiarity with the event is pretty useful given how unnatural this probably is for most of these guys. He’ll know how to pace himself, what kind of pitches he wants, etc. He pulls his homers more than most in this field and tends to hit line drive homers as opposed to big flies. The wall in left field in Cleveland is high, so maybe that hurts him. Pederson was last in the Derby in 2015 and made the final, losing to Todd Frazier. He’s not thought of as a Homer Run Derby-type guy much anymore given that he’s almost strictly a platoon player, but they won’t be brining in any lefties to face him in this event. Could be a good sleeper pick.

Alonso, with 30, has more homers than anyone in the Derby. He is also tied for the hardest-hit homer in baseball this year, exit-velocity-wise, at 118.3. Alonso and Guerrero are the rookie stories. Santana is the obligatory hometown guy and, at 33, is the graybeard of the bunch. He’s having a fine power year — and is on pace to put together his best season at the plate in his career — but I doubt he’s in this event if it’s not taking place in Cleveland.

The Bell/Acuña matchup is the deep-fly bracket. Bell has hit seven homers over 440 feet this year and five farther than 450 feet. That’s Stanton/Judge stuff. Acuña is third in all of baseball in average home run distance. Both have easy power. This is the matchup I’m most looking forward to.

As we did the past couple of years, Bill, Ashley, and I decided to try to pick winners this year. We will not, however, be getting $1 million if we are correct, I don’t :