Nike recently decided to pull one of its sneakers, featuring the 13-star “Betsy Ross flag,” off of the market after consulting with activist and former NFL quarterback Colin Kaepernick. Kaepernick expressed concern that the flag was a symbol of an ugly time in the history of the U.S., when slavery was legal. The flag has been flown by white supremacists, including Jeremy Joseph Christian, at rallies.

If Kaepernick said “breathing is good,” a certain segment of the population would hold their breath until they passed out. They were upset with Nike when it teamed up with him to commemorate the 30th anniversary of the “Just Do It” slogan, vowing to boycott the company. Those same people apparently forgot about their boycott because they’re threatening to boycott Nike again over this issue with the flag.

The Tennessee Smokies, the Double-A affiliate of the Cubs, decided to inject itself into the debate on Wednesday. The team’s Twitter account posted four pictures showing the 13-star flag across second base with the caption, “Hey @Kaepernick7 after a lot of thought, we have decided it’s best to just do it. #America” The team has since deleted the tweet, but here it is for posterity: 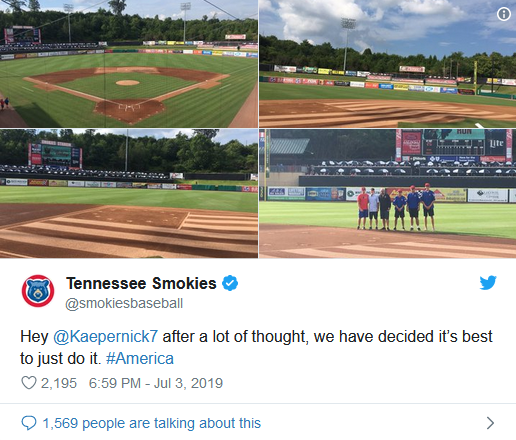 Personally, I’d love to see a Venn diagram of the crowd that constantly shouts “stick to sports” and the crowd applauding the Smokies because it would be just one circle.

Most of us have had a friend who reflexively did whatever behavior you told him not to do anymore because it’s annoying. “Stop chewing with your mouth open.” [He grossly exaggerates his chewing while smacking his lips.] That’s what all of this backlash to Nike and Kapernick looks like — just reflexive, childish contrarianism.

Regarding one of our recent tweets regarding @Kaepernick7 and our field design for tonight's game, it was meant to be a light-hearted take on a current situation. We did not mean to offend anyone by it. If it did, we certainly apologize.

“We did not mean to offend” is not an apology, Smokies.