Pirates 18, Cubs 5: Josh Bell was a one-man gang, hitting three homers and knocking in seven runs to power the Buccos’ rout of the Cubbies. Wait, I take that back: the Pirates had 12 extra-base hits and 23 hits in all, so Bell had help. Adam Frazier had four doubles and drove in two. Colin Moran was 5-for-5 with two doubles and drove in two as well. Jung-Ho Kang and José Osuna homered. Normally I’d single out an opposing pitcher responsible for all of that damage, but that seems unfair in this case: 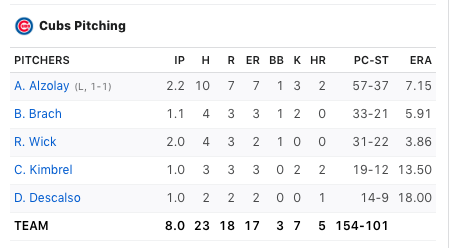 No Cubs pitcher was without sin last night.

Rays 6, Orioles 3: Three wins in a row for the Rays who got a three-run homer from Kevin Kiermaier that brought them back from a 3-2 deficit in the sixth inning. Two-way Brendan McKay made his debut as a hitter in this one and went 0-for-4. As I noted when he was called up, his arm is way ahead of his bat and, frankly, the Rays are gonna have better options at DH most nights than him so if I’m them I let him stick to pitching. I guess you can mess around a bit when you’re playing Baltimore, though. And it is fun to say “Two-Way McKay,” so I get it.

Brewers 8, Reds 6: Cincinnati led 3-1 heading into the seventh inning when the Brewers rallied for five thanks to a Lorenzo Cain bomb, three run-scoring hits and a sac fly. A Eugenio Suárez two-run blast — his second of the night — brought the Redlegs back to within one but Christian Yelich‘s two-run blast in the ninth — his 30th on the year — gave Milwaukee the breathing room it needed. Yelich is the first Brewer to have 30 or more homers before the All-Star break. He’s on a pace for 57 dingers.

Angels vs. Rangers — POSTPONED: Tyler Skaggs grew up in Santa Monica and was an Angels fan as a kid. After years of injuries he was finally healthy and pitching well. As we learned with another Angels pitcher, Nick Adenhart, though — who died just a couple of months before the Angels drafted Skaggs in 2009 — everything can change in a moment. Everything can end. We’re not on this Earth long as it is, but even if we get four score and ten it passes fast. Based on what we’re learning about Skaggs’ life on the event of his death, it sounds like maybe he knew that on some level. He sounds like a young man who burned bright, exuded confidence, savored life and who did not let setbacks get him down. It’s sad when anyone goes. It’s sadder still when it’s someone young with such promise.