The Washington Nationals have a complicated history with respect to their Montreal Expos origin story. As in, they don’t pay all that much attention to it. They’ve retired the numbers of a couple of Expos greats and have put them in their ring of honor — and of course the Expos’ franchise records are, officially, part of the Nats history — but it’s not a super close thing. Some Nationals fans go beyond ignoring that history to being downright hostile to the idea that the club they root for is carrying on the Expos’ tradition somehow.

Given that the Expos were intentionally run into the ground in a Major League Baseball-led gambit to reward Jeffrey Loria with a new franchise and relocate the team to a market the league had long been hungry to re-enter, Expos fans from back in the day put it in starker terms. From an article in the Washington Post a couple of years ago:

“I’ll put it to you as simple as I can,” said Perry Giannias, who estimated his Expos fandom at about a 15 or 25 on a scale of 1 to 10. “It’s like you being friends with a guy who’s now sleeping with your ex. And now they invite you to the wedding, and your kids are ushers or bridesmaids or flower girls. It doesn’t work like that. It’s very difficult to digest.”

So, yeah, it’s not exactly a nostalgia-fest when it comes to the Expos and Nationals sordid historical stew.

But now there’s this:

The Nationals will throw it back to 1969 and recognize their Canadian heritage when they host the Kansas City Royals at Nationals Park on July 6. For the first time, Washington will wear Montreal Expos throwback uniforms — specifically, the powder blue away jerseys and pants the expansion franchise wore with its classic tri-color cap during its inaugural season 50 years ago.

For those of you more familiar with the Vlad Guerrero-era Expos livery, here’s what the 1969 throwbacks will look like: 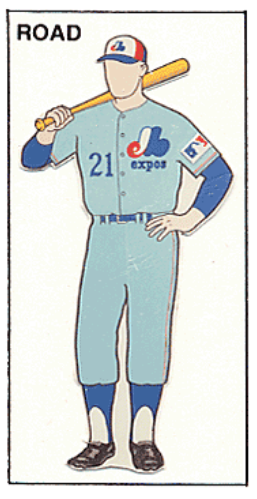 Pretty sweet, even if it makes a lot of people kinda grumpy. Feelings don’t matter that much when there’s merch to sell, however.

The real question is how Stuart Sternberg and the Rays are gonna react to this given that the Nationals are trying to muscle in on what is, apparently, now their new market.