Phillies 13, Mets 7: Philly snaps its seven-game losing streak thanks to a two-run homer from Maikel Franco and bombs from Rhys Hoskins, Jean Segura and Jay Bruce. Their 13 runs here almost matched their total number of runs — 15 — scored during their losing streak. I’m less interested in the win, though, than I am in this quote from Gabe Kapler:

“We executed on our game plan to keep things light, to come in with a little swagger. Sometimes a little swagger pre-game leads to swagger in-game. I think we got some of that back.”

I wasn’t aware that one can formulate and execute a “game plan” to simply relax and I had no idea that swagger was something one turns on and turns off at will, but you learn things every day. Either that or Kapler is a bottomless source of cliches translated from English to Kaplerese and back to English. Could be either one.

As for the Mets, welp, what else can you say about this dumpster fire of a franchise?

Red Sox 6, White Sox 5: Sox win! It was a seesaw affair for much of this game, with Chicago taking leads and Boston tying it. The Chisox took a two-run lead into the bottom half of the seventh when Mookie Betts hit a solo homer to make it 5-4, Eduardo Núñez hit an RBI single in the bottom of the eighth to tie it and then Marco Hernández hit a bases-loaded infield single in the bottom of the ninth to give the Bosox the walkoff win. It was the second straight walkoff home walkoff win for Boston, which has won nine of 12.

Indians 3, Royals 2: This one was a seesaw game too — just a smaller seesaw, perhaps from a playground more geared toward toddlers than bigger kids — also won with a walkoff. The walkoff, though, was a lot more of a big boy walkoff than the one in the Sox game, as this one was a homer, off the bat of Jason Kipnis in the tenth inning. The Indians have won four in a row and at 15-6 they have the American League’s best record in the month of June. Their once double digit division deficit is now down to seven and a half.

Yankees 10, Blue Jays 8: Aaron Hicks and Giancarlo Stanton each hit three- run homers — it was Stanton’s first of the year — to stake the Yankees to a 10-2 lead after six and to back CC Sabathia‘s six innings of two-run ball. Things got a bit more interesting after Sabathia left, with Jonathan Holder giving up five on a Freddy Galvis grand slam and a sol shot to Lourdes Gurriel Jr. without recording an out, but his efforts notwithstanding, eight-run leads are hard to blow. The Yankees have hit homers in 27 straight games which ties a big league record set by the 2002 Texas Rangers.

Cubs 8, Braves 3: Julio Teherán has been a stabilizing force in the Braves rotation of late but last not he got rocked, digging a seven-run hole by the fifth inning that the Braves didn’t come close to climbing out of. Three of those runs were knocked in by Willson Contreras who homered, singled in a run and grounded out to plate another. After the homer, he and Braves catcher Tyler Flowers jawed at each other and benches briefly cleared, so that was fun:

The reason for the jawing was that, just before the homer, Contreras took issue with a called strike and said something to the umpire. Contreras said that Flowers inserted himself into the conversation, so when he hit the ball out he turned back to both Flowers and the ump and said something himself. Whatever. I’m mostly just shocked that a Braves catcher got cranky after an opposing homer and it wasn’t Brian McCann.

Anyway, the top six batters in the Cubs lineup each drove in runs, which was more than enough support for Jon Lester who allowed only two unearned run in six. Chicago turned its half-game lead in the NL Central into a one-game lead over idle Milwaukee.

Rockies 2, Giants 0: Jon Gray blanked the Giants out for six and three relievers each blanked them for an inning to finish the six-hit shutout. David Dahl‘s two-run homer in the third was all the offense in the game and all the Rockies needed.

Diamondbacks 8, Dodgers 5: The Dodgers led 3-0 before the Diamondbacks even came to bat, but Christian Walker‘s first inning three-run homer started the game anew. Walker, by the way, now has three homers off of Kershaw in his career. In six total at bats. Baseball, man.

In the second Arizona took the lead when Zack Greinke homered off of Clayton Kershaw:

Arizona would hold that lead until the Dodgers tied it in the seventh on a bases-loaded walk. The Snakes would plate four in the eighth, though, with David Peralta‘s RBI single putting them ahead, Nick Ahmed hitting a sac fly and then Tim Locastro hit a two-run single.

The play of the game, though, didn’t come from a ballplayer, it came from this fan who dove for a foul ball, had his pants fall down, then got kicked out of the ballpark in front of his girlfriend and God and everyone. Let’s do this Zapruder-style: 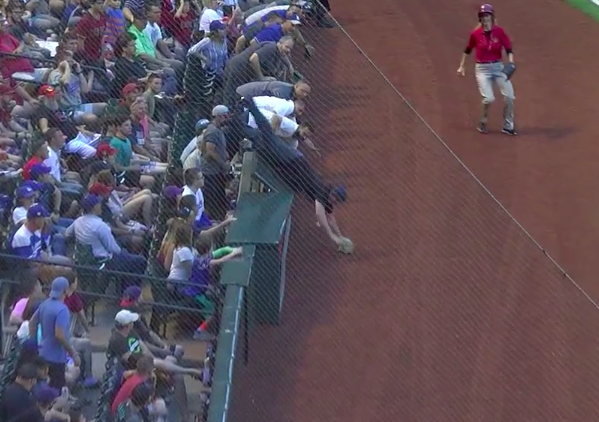 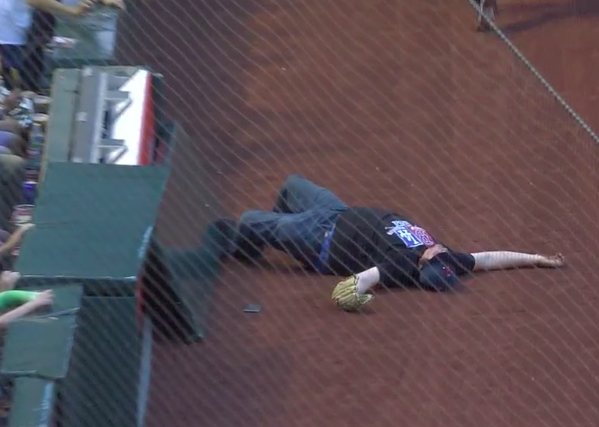 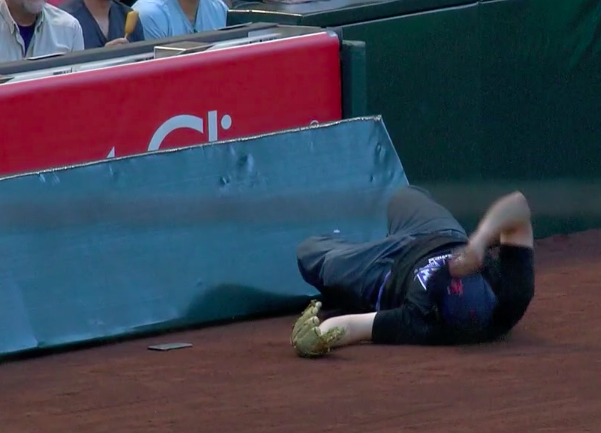 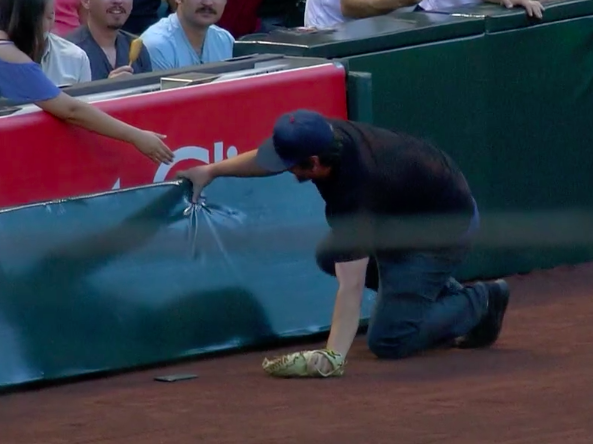 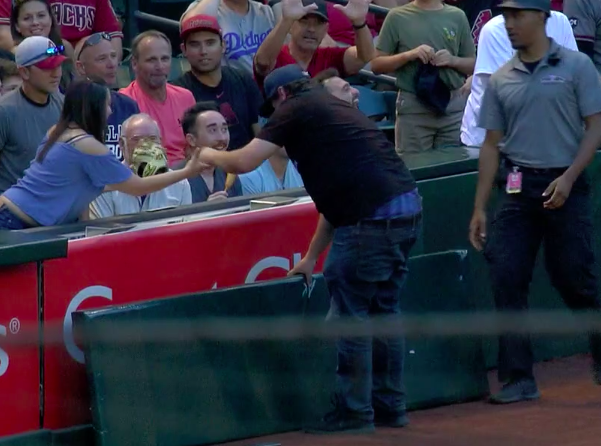 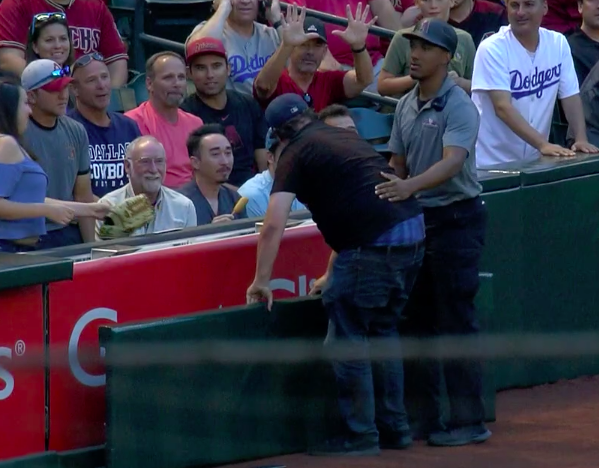 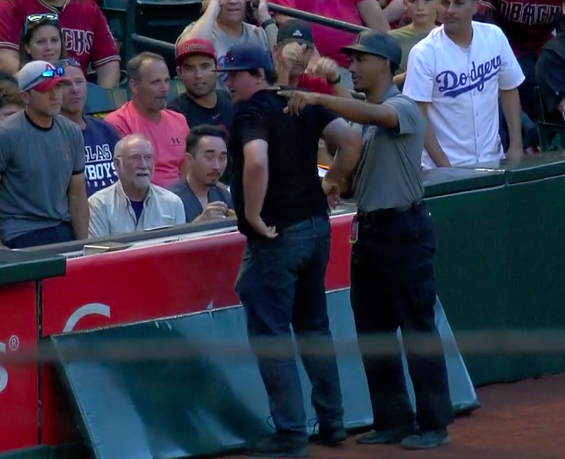