Cardinals 5, Phillies 3: Dakota Hudson — who, despite that name is not a former child actress who warmed America’s heart as the cute comic relief in a movie about, oh, one of her parents dying of cancer, only to grow up and start to take roles in provocative R-rated fare that makes all of us who remember her from “Six Months Left to Love” or whatever it was all feel rather uncomfortable — tossed six innings of one run ball. Marcell Ozuna, Matt Wieters, Jedd Gyorko, and Matt Carpenter all went deep.

Be right back: I have to buy the URL and register the title “Six Months Left to Love” with the Writers Guild of America. I’ll sell it with Michelle Williams attached as the mom, but there’s no way I’m getting her, is there?

Giants 3, Marlins 1: This one of only a couple of pitchers duels on a night full of big offense. I feel like now that we’re fully into summer the runs are gonna flow like the tears during the deathbed scene of “Six Months Left to Love.” My God, I’m excited about this project. I should start a GoFundMe and get this baby rolling. Anyway, the Giants break their seven-game losing streak thanks to Brandon Crawford hitting a tie-breaking two-run double in the eighth. Mike Yastrzemski singled in San Francisco’s first run, which makes him the all-time RBI leader in the Yastrzemski family in games against the Miami Marlins. Take that, grandpa Carl!

Brewers 11, Pirates 5: Mike Moustakas hit two homers. I sure as hell hope he just put his head down, gently laid his bat down in the tall grass and then ran the bases quickly afterward, lest Pirates announcer Tom Wehner start moaning about how Moustakas’ dead relatives are sad or whatever. I haven’t watched the video yet but based on Moustakas’ postgame comments, I’m guessing we’re safe here:

“I’ve honestly just been getting good pitches to hit and not missing them. I’m just trying to not do too much. Take the same approach, same swing. Just get a good pitch to hit, get a good swing on it and see what happens.”

Whew. Safe and boring. Just like Wehner likes it. Milwaukee has won three of four.

Rockies 11, Diamondbacks 10: Daniel Murphy singled in Trevor Story in the bottom of the tenth for the Rockies’ fourth walkoff win on their current home stand. They sweep the Snakes and extended their winning streak to five games. Murphy finished with three hits and three RBI. Story had four hits.

Rays 14, Twins 3: Austin Meadows drove in four and Brandon Lowe knocked in three as the Rays built up an 11-0 lead after four innings and then cruised to their sixth straight win. Every player in Tampa Bay’s lineup had at least one hit. Meadows has been absolutely on fire lately, with a seven game hitting streak which includes six multi-hit games. His line on the year: .361/.436/.688. Tampa Bay pulls to within a half game of the rained-out Yankees.

Royals 4, Rangers 2: Jakob Junis had a strong start for the Royals, allowing two over six innings of work, and the K.C. pen allowed only one hit in three shutout innings to close it out and give them a rare road win. Adalberto Mondesí and Jorge Soler each went deep. Question which just occurred to me: do any of the many teams who now share spring training facilities with another team have any informal trophies or whatever that goes to the team that wins the season series between the two of ’em? I think it’d be cool, for example, if there was some gaudy loving cup that changes sides of Surprise Stadium depending on who comes out better between these two. The one at Talking Stick, between the Diamondbacks and the Rockies, would be a bit more serious, as they’re division rivals. The one in Goodyear between the Reds and Indians can be a place for the Ohio Cup to sit if it doesn’t already. Let tourists take photos with it rather than have it in some Cleveland or Columbus front office.

And yes, there is an Ohio Cup. Note the little square “OH!” things along the section near the bat handles. That’s an ad for the Ohio Lottery, so you know it’s a sacred and venerated trophy: 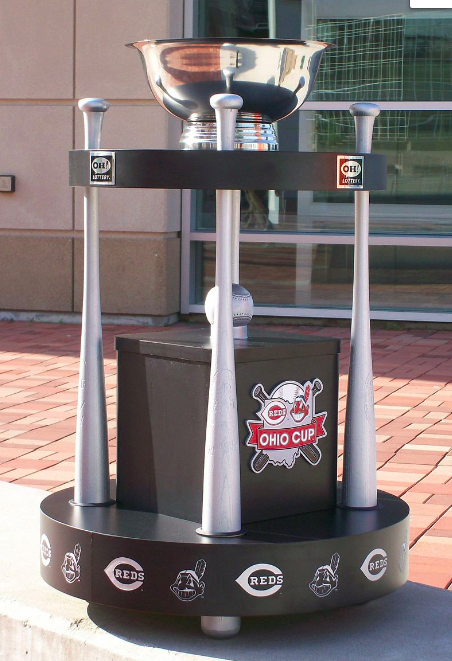 It being in Ohio, the Ohio Cup is routinely filled with Natty Light. When kids are around it’s filled with “pop,” not “soda,” which even after living here for 25 years still sounds dumb to me. Especially because it comes out more like “pahp” when most people say it.

White Sox 10, Indians 4: Yonder Alonso and José Abreu each hit two-run homers. Alonso also doubled. Eloy Jiménez and Leury Garcia each had three hits, including a two-run double from Jiménez. Carlos Carrasco, who has totally owned the White Sox over the years, allowed six runs and 10 hits over six and a third. The Chisox have won four in a row.

Dodgers 2, Mets 0: Hyun-Jin Ryu‘s mind-bogglingly good season continues as he tossed shutout ball into the eighth inning. It was the fourth time in his last five starts that he has blanked the opposition. In that time his ERA has dropped from 2.55 to 1.48. Max Muncy doubled in a run. Kiké Hernández singled one in. No word if they knew what was coming.

Angels 9, Mariners 3: I’ve talked before about how just how big the Japanese press corps assigned to follow certain Japanese players in America is. Ballplayers are bigger celebrities in Japan than they are here, so in addition to the baseball press — of which there are a ton already — you also get a lot more photographers and stuff. I’ve talked to some of the U.S.-assigned Japanese press over the years and they tell me that it’s kind of stressful sometimes because some of their publications are looking for new angles or new photos every single day and, my God, the baseball season is long and can get boring so it’s hard to do that. What breaks things up, I’m told, is when there’s a big story involving their subject or a big matchup or crossover event or something. ANYTHING to keep them from having to invent some new story out of a mundane batting practice or bullpen session on a random Wednesday.

Here my colleagues in the Japanese press had a great oppotunity!  Mariners starter Yusei Kikuchi facing off against the biggest current draw for Japanese readers’ eyes in Shohei Ohtani! Imagine the synergies that could be leveraged! Think of the features that the editors of these publications have been dreaming up over this for the past few weeks! I was excited just thinking about it and I don’t have anything to do with that world.

So, of course, Brad Ausmus sits Ohtani, scuttling it all. Thanks, dude! I’m sure this will help keep your DH fresh for those August and September games when the Angels are, like, 17 back of the Astros and you’ll need him every day.

As it was, Kole Calhoun and Cesar Puello homered, Mike Trout had three RBI and the Angels shelled Kikuchi for six runs. I assume the stories in Japan this morning are all about how lame it was that we were deprived of an Ohtani-Kikuchi matchup.

I am standing up at the water’s edge in my dream
I cannot make a single sound as you scream
It can’t be that cold, the ground is still warm to touch
We touch, this place is so quiet, sensing that storm
Red rain is coming down
Red rain
Red rain is pouring down
Pouring down all over me