Indians 7, Red Sox 5: Boston took a 5-2 lead into the ninth and blew it. Roberto Pérez hit a solo shot, Greg Allen hit a two-run homer and Jordan Luplow doubled in two to complete the hanging of the five-spot on the combination of Ryan Brasier and Travis Lakins. At this point I usually insert a “Craig Kimbrel is still a free agent” crack, and then some of you comment that Craig Kimbrel sucks and is overpaid and that you’re happy with guys like Brasier and Lakins because — I’m assuming — you have a personal, vested interest in John Henry’s finances and somehow think they’d be imperiled by slightly overpaying for a good pitcher. It takes all kinds, but I really don’t get y’all who think stuff like that.

Reds 11, Pirates 6: Any team could’ve had Derek Dietrich this past offseason. Including the Marlins, who controlled his right but let him go because they were too cheap and their rebuilding plans far too grand to pay a guy a million or two for some decent production. The Reds got him on a minor league deal and all he’s done since is rake. Here, as we noted last night, he socked three bombs, all of them two-run shots, to give him 17 on the year. The Pirates, whom Dietrich has taken special joy in victimizing, watching his dingers from the box and slow-trotting around the bases, didn’t even throw at him this time. They just watched him, knowing he has defeated them while their broadcasters embarrassed themselves talking about how Dietrich’s grandfather or whatever wouldn’t approve of his showboating. It’s gotta feel amazing being so far under an entire organization’s skin.

Padres 5, Yankees 4: Manny Machado singled in a run in the first and Eric Hosmer followed him with a three-run homer to give the Padres an early lead on Masahiro Tanaka and it’s a lead they’d hold. Starter Eric Lauer allowed one while pitching into the sixth and six relievers bent but didn’t break. Really, it’s odd to see a game in which the Yankees trailed early in which they didn’t just come back with a ton of bombs. It’s just kind of what they’ve done this year.

White Sox 2, Royals 1; White Sox 4, Royals 3: The suspended game from Monday was resumed and nothing happened until the ninth inning when Yolmer Sánchez singled to center, scoring James McCann for the walkoff win. In the game actually scheduled for yesterday, Kansas City scored three in the first on an Alex Gordon three-run shot, but starter Lucas Giolito would stay in for eight, striking out ten, having given up only those three runs. The Chisox, meanwhile, would plate four via a couple of sac flies and a couple of singles.

The best part of this game, though, was the ceremonial first pitch:

"Now, the key to this game is keeping your eye on the ball." pic.twitter.com/qZKAt6GSKk

And the still shots: 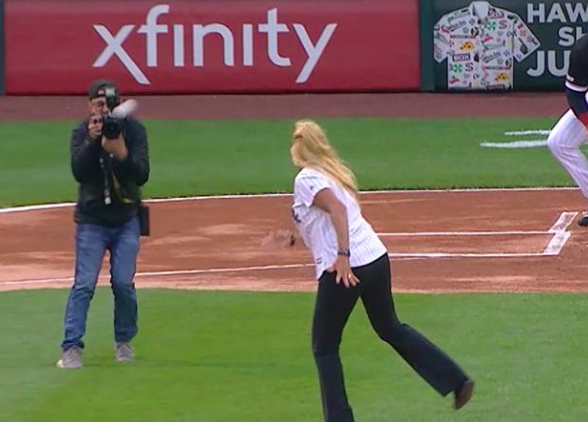 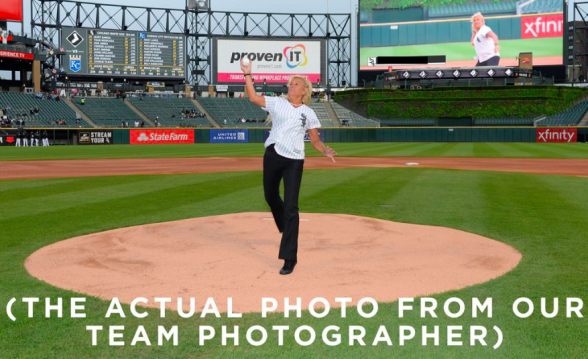 Rays 3, Blue Jays 1: Austin Meadows continued his torrid streak, homering for the third straight game. Avisail García went deep as well as the Rays bullpen brigade subdued the Jays, limiting them to six hits on the night. The Rays are a good team, sitting in second place in a tough division and have won four straight games, yet they continue to struggle with attendance. It’s not worth dwelling on that too much — everyone is aware of the structural/geographic/aesthetic/demographic issues of the Rays’ market and they do get pretty good TV ratings for their games — but it’s worth noting records. And this was a record low for Tropicana Field: 5,786 souls.

Tigers 3, Orioles 0: Matt Boyd tossed six shutout innings and the pen completed the job, holding the O’s to six hits and striking them out 13 times on the night. Miguel Cabrera singled in a run, JaCoby Jones doubled in a run and Niko Goodrum homered, um, in a run (sure) for the Tigers scoring.

Phillies 4, Cardinals 3: Nick Pivetta came back to the bigs and, after surviving a couple of first inning homers and finding himself in an early 3-0 hole, allowed three runs and three hits, striking out six in five innings. ‘Twas enough. ‘Twill serve. Bryce Harper doubled in two in the third to begin the Philly comeback and César Hernández completed it with a two-run homer in the fourth.

Marlins 11, Giants 3: In case you wanna know how things have been for the Giants lately, this one started off with a leadoff homer from Joe Panik that inspired this tweet from beat writer Andrew Baggarly of The Athletic:

Joe Panik homers on the first pitch of this game and the Giants dugout looks livelier than I've seen it in weeks.

Then the game happened, and it inspired this tweet:

In between those things Jorge Alfaro and Garrett Cooper each hit three run homers and Marlins starter Trevor Richards surrendered only two hits in seven innings of work. The Giants have lost six straight.

Nationals 5, Braves 4: Stephen Strasburg struck out 11 in seven innings of work. Howie Kendrick had three hits, including a home. Trea Turner also had three hits. The sixth inning was particularly ugly for Braves pitchers as Max Fried hit a guy and walked two guys, including Adam Eaton with the bases loaded. Anthony Swarzak then came in and walked Anthony Rendon to force in another run. The Braves will have what Baggarly’s having.

Astros 9, Cubs 6: Alex Bregman homered twice, with the second being a go-ahead two-run bomb in the sixth that gave Houston a lead they’d not surrender. A.J. Hinch picked up his 500th victory despite Astros pitchers giving up five homers to Cubs batters. All but one of ’em were solo shots, though, and you can survive solo shots.

Twins 5, Brewers 3: When things are going good they’re going good. And when they’re going good things like “rookie makes his big league debut against a good and powerful team and tosses six shutout innings” happen. Devin Smeltzer was that rookie for Minnesota. He allowed three hits, walked none and struck out seven. Eddie Rosario homered and Max Kepler added a two-run double for Minnesota, which has won 12 of 14 games and has the best record in the majors.

Rockies 6, Diamondbacks 2: Chris Iannetta hit a two-run shot in the seventh to break a 2-2 tie. Ryan McMahon added some insurance with a two-run double. The crowd was happy. Not just because of the win but because it was in the 40s and raining and no one wanted to stay for extra innings.

Angels 6, Athletics 4: It was tied in the ninth when Shohei Ohtani lined a single to score two. That gave L.A. the win, overcoming homers from Matt Olson, Marcus Semien and Ramón Laureano.

Mets 7, Dodgers 3: Michael Conforto stepped to the plate with the bases loaded in a 2-2 game in the seventh and, bammo, grand slammo.

God, why did I write something that dumb? Sorry, the recaps have taken me way longer than usual this morning and I’m kinda punchy.

Maybe the writers covering this game were punchy too, because there’s an extended riff in the AP gamer about how Robinson Canó helped Conforto before his at bat, during a pitching change. I’m thinking “hmm, maybe Canó had some insight into the new pitcher? Something like “he likes to start lefties out with offspeed stuff low and away” or something useful like that? Nah:

Conforto took some advice from Cano during a pitching change before his at-bat in the seventh and turned on an 0-1 pitch from Scott Alexander that lifted the New York Mets over the Los Angeles Dodgers 7-3 Tuesday night.

“He’s going to try to get you to hit into a double play,” Cano told Conforto.

The Mets outfielder went to the plate expecting that, but got a ball up in the zone and sent it into the left field pavilion to snap a 2-all tie.

“When I got back to the bench I told Robinson right in front of Chili (Davis) that he is going to be my hitting coach now,” Conforto said.

Bases were loaded with one out so, yeah, I suppose he was going to try to get a double play. But then that didn’t even matter because it caused Conforto to look for something down and he didn’t get something down, he got something up. Seems to me that Conforto’s fast-twitch muscles, rather than any sage advice from Canó, were to thank, but what do I know?