I hope you had a nice weekend.

On Saturday night I went to see “Avengers: Endgame” for a second time with my daughter. It was even more enjoyable the second time than it was the first time. While walking out of the theater, however, my daughter said “It’s a shame Captain America went back in time but didn’t stop the Kennedy assassination or Watergate or 9/11 or any of that stuff.” I said “How do you know he didn’t?” She said “You think they’d mention it.” I tried to tell her that that might’ve taken the audience out of the movie, which was already over three hours in at that point, but she just said “Nah. He mailed it in. He got soft.”

Never have teenagers, folks. Not even once.

Dodgers 6, Nationals 0: Hyun-Jin Ryu took a no-hitter into the eighth inning and ended up allowing just one hit and striking out nine in eight scoreless innings. Corey Seager hit an eighth inning grand slam to transform this from a situation in which the Nats could say they just got beat in a tough game by a pitcher on a roll to one in which they just got beat and looked ugly doing it. As it stands, the Nationals (a) are greatly underachieving expectations; (b) only the Marlins, Orioles, and Royals have worse records; (c) they just finished a 3-7 road trip with a lot of ugly moments; and (d) they and have an off-day today before a homestand begins. There’s a lot wrong with this  team and I don’t think all of it is manager Dave Martinez’s fault, but if I’m Martinez, I don’t buy a lot of produce for my D.C. apartment when I go shopping this morning.

Oh, and just for fun, here’s Nats reliever Kyle Barraclough after loading the bases but just before giving the grand slam to Seager. About sums things up for the Washington right now.

Red Sox 11, Mariners 2: J.D. Martinez hit two homers and Michael Chavis drove in five to finish the three-game sweep in which the Red Sox outscored the Mariners 34-8. Seattle has lost four in a row and 15 of 19. This after their fantastic 13-2 start. Which has me thinking about how hard it must be to talk to the press if you’re on a team like the Seattle Mariners in this sort of situation.

See, everyone knew the Mariners would not be good this year. Maybe the Mariners felt their chances were better, but even they, probably, in their heart of hearts, did not think they’d start off 13-2 or once they did that such a thing would be close to sustainable. Yet they still had to give quotes after games in the middle of that hot streak that projected confidence. Stuff like “we’ve always believed in ourselves,” etc. Then, when they started to stumble, they had to give quotes that, tonally speaking, came off as if the slide was the anomaly, not the winning. Stuff like “we need to get back on track,” implying that the 13-2 track was the expected track when, in reality, it really wasn’t. The losing streak is the team getting back on track. But they can’t say that. A ballplayer can’t say “well, this is just expected regression” or “that start was nice, but we’re more likely, at best, a just-below .500 team, not a 13-2 kind of team, so we should not be surprised this correction is occurring.” You say that and you’re gonna make headlines you don’t want to make. So, yeah, gotta be hard to be a Mariner talking about the team right now.

Way easier if you’re Boston. “We stunk early but we’re stinking less now and that’s nice.” The quotes are much easier when you’re a good team finally playing well.

Yankees 7, Rays 1: Speaking of righting the ship. For most of the season the Yankees have been a cross between a M*A*S*H unit and a bunch of Scranton/Wilkes-Barre RailRiders with delusions of grandeur yet they just took two of three from the first place Rays and are now just a half game out. And, assuming the guys on the injured list avoid setbacks and return to the roster, it’ll be the same thing as if the team just went out and acquired a bunch of All-Stars before the trade deadline. Which is to say: watch out for the Yankees.

Here Masahiro Tanaka tossed seven innings allowing just one run and five hits with seven strikeouts and no walks. He was lights out. So too was Tropicana Field, which experienced a blackout that delayed the game 43 minutes in the ninth inning. The Rays’ official statement about that:

A statement from us on the delay at Tropicana Field during today's Rays-Yankees game. pic.twitter.com/XeTwKjxfCN

I’m gonna assume that this was done in real time by the Rays’ best buddy — a guy in the chair type — who hangs around for purposes of providing exposition and then solves the problems with technobabble. I wasn’t there, but there’s a 75% chance that he was wearing a headset and then said “I’m in” just before switching the power back on.

Phillies 6, Royals 1: Phillies starter Cole Irvin made his major league debut and all he did was toss seven innings of one-run ball, allowing five hits with one walk and five strikeouts. As near as I can tell, there have been seven players in major league history with the first name Cole. The two best are both lefty starters who came up with the Phillies. Makes you think, man.

White Sox 5, Blue Jays 1: Lucas Giolito allowed only one over seven. That’s two nifty starts in a row for Giolito, as he tossed seven shutout frames against the Tribe the last time out. The Sox’ five runs came via a Tim Anderson three-run homer and a Yonder Alonso two-run jack.

Astros 15, Rangers 5: Alex Bregman hit two homers and drove in five. George Springer homered twice and drove in four, but he had five hits in all and scored five times so advantage: Springer. The Astros have won five in a row and eight of nine.

Tigers 5, Twins 3: Nicholas Castellanos homered, doubled and singled to help the Tigers earn a split of the four-game series. He was a triple shy of the cycle. Which, as we’ve reminded you many times over the years, sounds way more special and rare than it really is.

Pirates 10, Cardinals 6: Josh Bell homered and drove in five and the Pirates take three of four from the Cardinals in St. Louis. Thanks to St. Louis blowing Pittsburgh out on Thursday night, however, in the series the Cardinals outscored the Pirates 25-18. So it was basically identical to the 1960 World Series except for the lack of the Mazeroski homer and the fact that almost everyone who played in the 1960 World Series is dead now and no one who played in this series is as of this writing.

Rockies 10, Padres 7: Charlie Blackmon hit two homers, Raimel Tapia had a two-run homer and three hits in all and Daniel Murphy hit a pinch-hit three-run double as the Rockies outslugged the Padres to win the rubber match of the three-game series. From a purely aesthetic perspective, this game had some of the best current names in all of baseball in it: Tapia, Antonio Senzatela, Franmil Reyes, Seunghwan Oh, Nick Margevicius. Just fantastic. All of those are Four-star names if you ask me.

Orioles 5, Angels 1: O’s starter John Means allowed only one run over six innings and every single run in this game scored on a homer: Chris Davis, Stevie Wilkerson, Dwight Smith Jr. and Pedro Severino went deep for Baltimore and Mike Trout, natch, went deep for the Halos. The O’s salvage one in the three-game set and break a four-game losing streak. 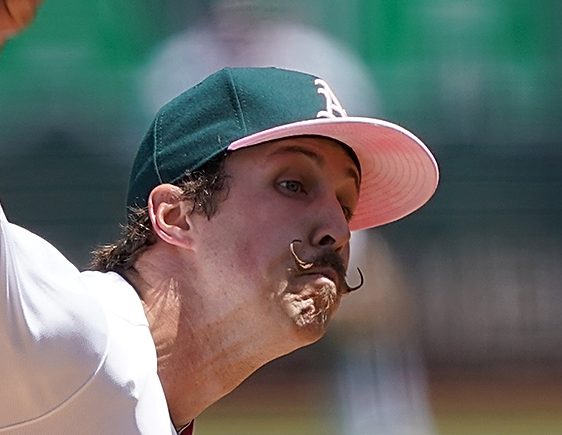 Sure, he gave up four runs — a couple them when the guy who came in to relieve him gave up a three-run homer to Roberto Peréz with a couple of inherited runners on base — but he looked really fantastic, right?

Braves 5, Diamondbacks 3: Eighth inning, two down, bases loaded for the Dbacks and Wilmer Flores hit one that looked like trouble. No trouble for Nick Markakis:

The Dbacks were doing that all day: pressing the Braves, putting them in trouble but not fully capitalizing. They had 14 hits but Atlanta pitchers mostly wriggled out of jams. Stuff happens. Joahan Camargo and Tyler Flowers each had two RBI for Atlanta as they take the series, winning three out of four.

Giants  6, Reds 5: Pablo Sandoval hit a two-run homer in the first, doubled and scored the go-ahead run on Kevin Pillar‘s eighth inning single to bring the Giants back from behind. San Francisco salvages one in the three-game series.

Cubs 4, Brewers 1: Jon Lester‘s fantastic season continued, as he allowed just one run — unearned — while pitching into the seventh, scattering nine hits. That reduces his ERA on the season to 1.16. His K/BB ratio is 39/8 in 38.2 innings. That’ll play. Javier Báez’s fifth inning double broke a 1-1 tie and Kris Bryant‘s two-run homer in the seventh gave the Cubbies some insurance. The Cubs take two of three from the Brewers and, like the Red Sox and Yankees mentioned above, are making all of that early season talk about how disappointing they were seem rather quaint.

Now here you go again, you say
You want your freedom
Well who am I to keep you down
It’s only right that you should
Play the way you feel it
But listen carefully to the sound
Of your loneliness
Like a heartbeat drives you mad
In the stillness of remembering what you had
And what you lost, and what you had, and what you lost
Thunder only happens when it’s raining
Players only love you when they’re playing
Say women they will come and they will go
When the rain washes you clean, you’ll know, you’ll know