I was pretty out of it, baseball-wise this weekend. I was down in Kentucky watching horses jump and dance and stuff, while running the grill at the tailgate for the cross-country portion of the event. If you’re not familiar with three-day eventing, know that tailgating for cross country is sort of like going to a golf tournament, being allowed to pull your car up to the edge of the green or fairway, cook tasty meats and have cocktails while the golfers come through just a few feet away, all while listening to whatever music you want to. Like, I only had to move a few feet from my grill to take this shot. If you did that with golfers, you’d be arrested. Horses don’t care. Generally speaking: horses >>> golfers.

In addition to the eventing, I had time to re-stock my bourbon cabinet with some of America’s Native Spirit and to spend some quality time with friends. A nice weekend! Now, back to the grind.

Rays 5, Red Sox 2: Daniel Robertson hit a first inning two-run homer and Yandy Díaz tripled in two runs in the second to put Chris Sale and the Sox in a 4-0 hole early. Sale would last seven innings and not allow any more damage but his teammates couldn’t climb out thanks to another excellent Tyler Glasnow start (6.2 IP, 6 H, 2 ER, 9K). Glasnow is now 5-0. Sale is now 0-5. More importantly, the Rays took both games of the rain-shortened series and Boston is now 7.5 games back of ’em in fourth place. Heck, they’re far closer to Baltimore in the cellar than they are to the Rays.

Nationals 7, Padres 6: Matt Adams hit a walkoff homer in the 11th to lift Washington past San Diego. It was the seventh unanswered run scored by the Nats after they fell behind 6-0 in the early going. Carter Kieboom, Víctor Robles and Juan Soto all hit homers for the Nats as well. According to the Elias Sports Bureau, it was the first time three teammates under the age of 22 homered in the same game. Which means that Elias has, embarrassingly for them, missed the fact that in the summer of 1985 Shawn Hoffman, Robert Keatley and I all homered for Doug’s Family Hairstyling in our victory over Pleasant Thoughts Christian Book Store in a South Parkersburg, West Virginia Little League game. Those two were, I think, 13 at the time and I was 12. So take that, Nationals.

Blue Jays 5, Athletics 4: The Jays scored four in the bottom of the 11th, three of which came on Brandon Drury‘s three-run homer and one coming on a Justin Smoak walkoff single. Drury was the hero on Friday night too, hitting a walkoff two-run shot. Lost in all of this was a nice pitching performance from the A’s Chris Bassitt (7 IP, 3 H, 1 ER, 9K) and five blue Jays pitchers combining to hold Oakland to one run over the first ten innings of the game. The Jays are sitting at .500.

Phillies 5, Marlins 1: The Marlins didn’t make Zach Eflin work too hard to throw a complete game. Indeed, Eflin needed only 107 pitches to go the distance, scattering seven hits while allowing only one run.  It was just two weeks ago when Eflin allowed six runs on ten hits — three of them dingers — in four innings against Miami. Guess he figured out what he was doing wrong.

Mets 5, Brewers 2: Robinson Canó hurt his finger and left the game after getting hit by a pitch. Christian Yelich strained his back. Rough afternoon all around. The roughest thing that happened, though, was when this poor guy had this happen to him:

I’m not talking about Braun. He’s a pro and he can handle it. I’m talking about the guy who lost at least $12 worth of beer. Tragic. As for the game, the Brewers intentionally walked Michael Conforto to get to J.D. Davis with the game tied two in the seventh inning and Davis singled in the go-ahead run. Tomás Nido — who just got called up before the game to take the departed Travis d'Arnaud‘s place on the roster — then knocked two more in via a double. The Mets avoid a sweep.

Braves 8, Rockies 7: The Braves were down 7-5 in the eighth but Josh Donaldson changed that with a three-run jack that gave them the lead and, ultimately, the ballgame. Ozzie Albies scored on that homer after singling. He also homered twice himself in the game, as did teammate Freddie Freeman. Colorado threatened in the ninth but nothin’ was doin’. The late rally and the Braves’ win averted a three-game sweep at the hands of the Rockies.

White Sox 4, Tigers 1: Sox starter Reynaldo López struck out 14 batters over six innings, which is simply redonkulous. He allowed an unearned run on two hits and three walks too, but hell, he could’ve given up a bunch of runs and all those Ks would’ve been something. His counterpart, Matt Boyd actually had an OK day too, allowing two over six while striking out nine, but that’s getting lost in the wash. Welington Castillo went 2-for-4 with two RBI, Leury García and Yolmer Sánchez each drove in a run and José Abreu went 2-for-3 in support.

Twins 4, Orioles 1: Max Kepler homered for the fourth time in the series and the Twins hit 12 homers in the three-game series sweep. And they did not just sweep the O’s in this series but in their six-game season-long series which is, oddly, over already. They won’t meet again until 2020. Or this year’s playoffs. You never know, man.

Angels 7, Royals 3: Albert Pujols hit a go-ahead, two-run double in the first inning to pass Barry Bonds on the all-time RBI list and to stake the Angels to a lead they’d never surrender. Justin Bour hit a three-run homer in the ninth to make a reasonably close game not reasonably close. The Angels took two of three from the Royals. 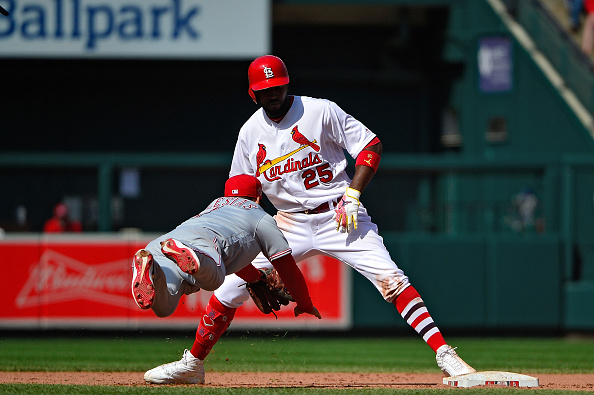 Yankees 11, Giants 5: New York had a 6-0 lead after three which they extended to 8-0 by the sixth. Gary Sánchez and Gleyber Torres each hit two-run homers Luke Voit had three hits and a walk. I’d call this one a laugher, but the Yankees probably weren’t laughing at watching two more players — D.J. LeMahieu and Gio Urshela — each leave the game with injuries. The former with a knee inflammation resulting from fouling a ball off of it on Friday. The latter after he was hit on the hand with a pitch in the fifth. X-rays were negative on both of them, but losing even more guys is not a good thing, exactly. I mean, the Yankees had to use J.A. Happ as a pinch hitter in this one. All that being said, they swept the Giants in this three-game set and have won nine of ten overall.

Dodgers 7, Pirates 6: The Buccos had an early lead after touching Rich Hill for five runs — only one earned — in the first couple of innings, but the Dodgers began to string together some business in the middle innings. Max Muncy singled home the tying run in the fifth inning and the go-ahead run in the seventh and Cody Bellinger homered. The Dodgers sweep the Pirates in three and have won four straight overall.

Rangers 14, Mariners 1: Elvis Andrus, Hunter Pence, Logan Forsythe and Shin-Soo Choo all homered and Lance Lynn allowed only one run over seven innings as the Rangers routed the M’s. Just a right proper butt-kicking. Sort of like they had on Saturday when they won 15-1. And sort of like what the Mariners did to them on Thursday when they beat Texas 14-2. Which is to say: what an ugly series.

Cubs 6, Diamondbacks 5: A fifteen inning affair, with five of the game’s 11 runs scored in the 15th inning. Eduardo Escobar‘s two homers — one in the fourth, one in the sixth — tied things up but there would then be eight scoreless innings before stuff happened again. That stuff: Ben Zobrist‘s two-run double and a sac fly from Kris Bryant to give Chicago a 6-3 lead. The Snakes mounted a two-out rally in the bottom half, with David Peralta and Christian Walker reaching before being doubled in by Caleb Joseph. That would be it, though, as Allen Webster got Nick Ahmed — barely, as he flew out to the warning track — to end it. Bryant homered earlier, as did Willson Contreras. The Cubs took two of three from the Dbacks for the second weekend in a row.

Astros 4, Indians 1: With a runner on, the Indians walked Josh Reddick to get to Robinson Chirinos in a tie game in the seventh. Chirinos didn’t much care for that so he hit a three-run homer. Earlier that inning Yuli Gurriel‘s RBI double put Houston on the board. A fourth inning Carlos Santana homer was all the offense Cleveland could muster off of Wade Miley and the Astros’ pen. The teams split the four-game set.