Hope you had a nice weekend. My Sunday was pretty good. I did some gardening, planting annuals and stuff because I’m a suburban dad and that’s what my people do in the spring. I’m a bit of a rebel suburban dad, though, as in this part of the country they say you really should wait until May to plant your annuals because of the risk of a late frost. But you know how I like to live life on the edge.

As I did that I listened to the first couple of innings of the Yankees game on the radio. That was OK. I had not taken in a John Sterling/Suzyn Waldman broadcast for many years and I was pleasantly surprised. I never liked them that much before — and I loathed Sterling when he did Braves games for a brief period in the 80s — but they’re better than I remember. I am amazed, however, at just how many mid-inning promos and ads they’re forced to read through. They can’t go three seconds without talking about how this or that is brought to you by whoever and whatever. I know all broadcasters have to do that but the Yankees broadcast amps that up by a factor of, like, five.

At 2pm I switched to Bob Uecker and the Dodgers-Brewers game. It was a wild one, as you may know and as we’ll discuss below, but I have to say how fun it was to listen to it on the radio as opposed to watching it on TV. I’ve talked about that a lot over the past couple of weeks so I won’t dwell, but listening to a game on the radio just exercises a different part of your brain, ya know? Between that and digging in the dirt it was just a fantastic way to spend a Sunday afternoon. It sucks for Monday morning because my muscles are as sore as hell, but it was great for a Sunday.

Yankees 7, Royals 6: With so many hitters on the injured list the Yankees are gonna need a lot of good pitching performances to get through this. And they got the second great one in a row from James Paxton, as he tossed six shutout innings and struck out 12. Then Chad Green and Adam Ottavino took over, each coughing up three runs in the Royals’ six-run eighth inning. Austin Romine tied it back up at six in the Yankees’ half of the eighth, it went into extras and Romine won it for the Bombers with a walkoff RBI single in the tenth. Well, they called it a single, but it flew to the warning track. A single was all it took.

Dodgers 6, Brewers 5: A similar situation here, as the Dodgers took a 5-0 lead by the fourth thanks to a couple of Joc Pederson homers, a couple of Cody Bellinger RBI singles and an RBI double from Corey Seager. Lorenzo Cain got two back with a homer off of Clayton Kershaw in the fifth — I was just about done with the snapdragons when that happened — and then pinch hitter Eric Thames hit a three-run shot in the eighth off of Kenley Jansen, who was trying for a four-out save. Tie game. Could’ve been worse, but Bellinger robbed Christian Yellich of homer with a fantastic catch earlier in the eighth. Jansen didn’t get that save, obviously, but he did vulture a win when Bellinger struck again, hitting a homer in the ninth off of Josh Hader, which held up. It was the second time in three days that Hader gave up a late homer and took the loss to the Dodgers. Not the sort of thing you expect to see all that often.

On the day, Pederson, Bellinger and Seager combined to go 10-for-14 with three homers, two doubles and six RBI. The rest of the Dodgers lineup went a combined 0-for-22 with eight strikeouts. L.A’s three beat Milwaukee’s nine.

Rangers 11, Astros 10: The Rangers had a bigger lead than either the Yankees or Dodgers had. They never blew it, but they did turn a 10-1 lead into a nail-biter. Joey Gallo drove in five, one of which came on his first career sac fly in 1,337 plate appearances which seems impossible but is true. I suppose the issue is either (a) really bad luck; or (b) when he hits fly balls, they tend to get the hell out of the park. Hunter Pence homered and drove in three. Big offensive numbers for Houston too, obviously, but they also dropped two of three to the Rangers and gave up 20 runs in the past two games. Not what a team that’s supposed to have one of the best pitching staffs around wants to be doing. The Rangers don’t have one of the best staffs but Shelby Miller got the win. It was his first in two years and three days.

Twins 4, Orioles 3: Kyle Gibson allowed two over six innings. The Twins hit 11 homers in Saturday’s doubleheader but none yesterday, proving that there’s more than one way to skin a cat. Which is a horrible phrase when you think about it, both for the disturbing images it invokes but also for the troublesome notion of there being some deeply entrenched cat-skinning establishment that refused to hear of alternative cat-skinning methods for so long that the ultimate existence of one had to be proven with some sort of grand, cliche-creating gesture. Stasis in any industry is bad. You have to innovate constantly if you want to get ahead, whether it’s in cat-skinning or other sectors.

Tigers 4, White Sox 3: Another big lead imperiled by the pen, though here the Tigers held on. Daniel Norris tossed five shutout frames, but Blaine Hardy and Victor Alcántara combined to cough up three runs in the eighth to make it close. Their not blowing it all the way allowed Norris to get his first win since September 2017. Shane Greene got another save. The Tigers have ten wins. He’s saved ’em all. He’s like John Hiller during the dark days in between the Kaline Tigers and the Sparky Anderson Tigers or something.

Red Sox 4, Rays 3: Boston was up 3-2 in the eighth when Tommy Pham — who played the goat on Saturday by getting picked off of first base to end the game — hit a homer to tie things up and force extras. The Sox rallied in the 11th, though, and got the go-ahead run thanks to a Christian Vázquez sac fly which held up. The Red Sox entered this series eight games back of the Rays. They swept Tampa Bay and left it trailing by five. Boston still has a lot to do, but that sure as heck seems less daunting than being back eight. Or, nine, ten or eleven for that matter.

Cardinals 6, Mets 4: Noah Syndergaard allowed six runs — four earned — on eight hits in five innings. That’s bad. He hit a homer, though. That’s good. It wouldn’t have been a homer, though, if Dexter Fowler hadn’t helped it over the fence with this ally-oop play:

Dexter Fowler with an assist he would rather forget. pic.twitter.com/DLjeTgXUjd

That’s bad. At least for Fowler. The Cardinals won, though. That’s good. The win had potassium benzoate in it.

Cubs 2, Diamondbacks 1: Tyler Chatwood and Robbie Ray dueled all afternoon but it came down to the ninth. With the Cubs up 1-0, Jarrod Dyson homered to tie it up in the top half. Chicago rallied in the bottom of the ninth, however, with Javier Báez doubling and then reaching third on an error. David Bote singled him in for the walkoff win. No one got a quote from Bote about it afterward, though, because he followed the walkoff with a run-off, as in run off to the airport to fly home to be with his wife who was in labor. Imagine how much trouble he would’ve been in if he had failed to come through there, the game went 17 innings and he missed David Jr. or Davidina or whatever they’re naming this kid bein’ born.

Rockies 4, Phillies 1: Jon Gray put up his third straight great start in a row, allowing only one hit in six shutout innings. Given that his first two starts of the season were pretty bad, I guess you could say that there’s not much . . . gray area when it comes to his outings? Hmmm?

What? You do thousands of these recaps every year for twelve straight seasons and see if all your jokes are winners, OK? Jesus, you get this stuff for free, you know.

Angels 8 Mariners 6: Tommy La Stella hit two dingers, Brian Goodwin and Kevan Smith each hit one too and the Angels snapped a six game losing streak. This was yet another game in which a big lead was almost blown — Los Angeles led 8-1 heading into the ninth — but a trio of Mariners homers was not quite enough to help Seattle sweep the Halos.

Blue Jays 5, Athletics 4: Not quite as big a lead almost blown but a 5-1 lead in the eighth ended up pretty close, even if the A’s late rally petered out just short. No one cares as much about the outcome, though, as they care about this ridiculous double play started by Ramón Laureano. He robs a homer, throws the ball like he’s got a dang cannon on that shoulder of his and then, because he overthrew it so much, it deked the base runner into trying to advance:

I mean, look at this still shot of the catch. Tell me how he caught this dang ball: 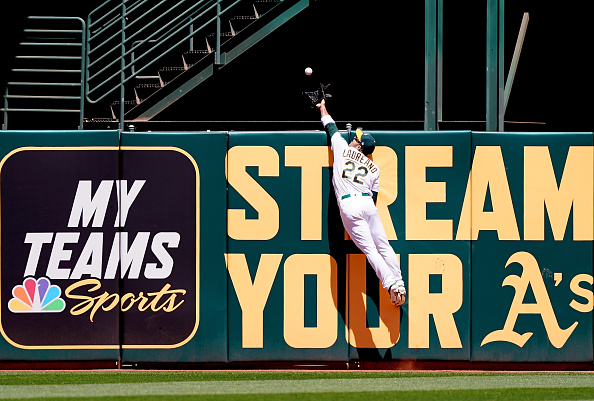 Laureano is a freak of nature and I love it.

Padres 4, Reds 3: Just like the Angels, the Padres snap a six-game skid. This thanks to an Austin Hedges homer and a Wil Myers go-ahead, two-run double in San Diego’s four-run third inning. Meanwhile, Joey Lucchesi held the Reds to one run and five hits in five and two-thirds, striking out eight.

Braves 11, Indians 5: Josh Donaldson hit two homers in the first two innings — a solo shot in the first and a three-run shot in the second — to help Atlanta jump out to an early 5-0 lead and things just got more and more out of control from there. I’d try to come up with some sort of storyline between Donaldson and his old team, but he was with Cleveland for, like, 11 minutes last season, so he probably didn’t even unpack his suitcase into the Holiday Inn Express dresser or wherever he was. Anyway, after that Atlanta just kept pouring it on, taking an 11-1 lead while Max Fried was tossing two-run ball into the seventh. Francisco Lindor hit his first homer of the season in his second game back, and Cleveland would score a couple more in all, but that was the end of their highlights for the night. Wait, I take that back. They had backup catcher Kevin Plawecki pitch the ninth and he somehow set the Braves down in order, so that was sweet. They got a couple more runs in garbage time but otherwise there was not much to write home about for the Tribe.

The Braves down to Cincinnati now for a midweek series. I’m going to the Wednesday night game because, hey, why not? I have a friend who got me sweet seats behind home plate and just above the left-handed batters box, if I’m guessing right. Look for me. I’ll be buried in my phone, ignoring the game like a proper online citizen.