The contract extension to which Ozzie Albies and the Atlanta Braves agreed has caused a lot of chatter since yesterday. As Bill noted, people in and around the game — including front office people who, one would think, would celebrate such team-friendly deals — are kind of shocked by how cheaply he was locked up.

I’ll add two things to this before letting it go:

First, while this is a low deal, I don’t think people truly appreciate how low it really is. There are a number of ways to portray that reality, but my favorite so far is to note that it’s about what the Indians gave second baseman Carlos Baerga on a yearly basis for his contract extension in 1993. Nineteen. Ninety. Three. Albies was born in 1997. Dear Lord.

Second, while we have slammed ownership like crazy here — and while the manner in which ownership takes advantage of players in various ways is still terrible in our view– the players are certainly not blameless for the current state of affairs. We’ve talked about the poor Collective Bargaining Agreement they negotiated a lot, but it’s also worth noting that, at some point, players have to accept at least a little risk in order to better their lot.

If players in Albies’ situation are unwilling to at least attempt to get closer to arbitration or to push for better deals than Albies and his agents did here, they are going to be stuck with this stuff. Be it in arbitration, free agency or anything else, comps are what matter. While any one of these deals may make great sense for the player in question, if a bunch of guys are risk averse and take low-dollar deals like this one, guys who come to the negotiating table later don’t have much of a leg to stand on when seeking better deals. Players’ power only comes via solidarity and shared risk and they’re all running for safety now, looking out for number one. They’ll get nowhere if they keep doing that. That’s just Labor 101.

In related news, at least one player who is working his way though arbitration — Tommy Pham of the Rays, whose Instagram account is “Tphamlv” — is not a fan of the Albies deal. Check out his opinion of it: 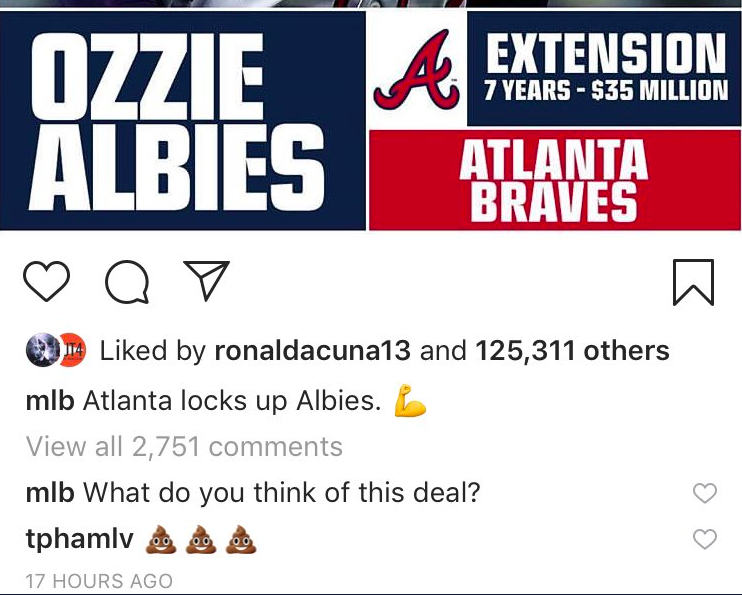