Let’s talk about video clips. As in video clips of baseball highlights the sort of which you are used to sites like this and others embedding in posts or sharing on social media. The sort of clips that have been part of the online baseball media and baseball fan landscape for several years now.

Until this year there had been a pattern of increasing availability and sharability of such clips. MLB.com and its various social media arms had, over the years, gotten better and better at putting such clips up quickly and effectively. A couple of years ago they created a dedicated, searchable video page at MLB.com that could get anyone clips of almost any notable highlight going back years. Last year they even added a searchable GIF database to it, which included both great plays and all manner of whimsy. The result of all of this was a super-engaging way to share great baseball moments with friends or readers or anyone who may have an interest in seeing a killer baseball highlight.

And then, this year, something changed.

I and others noticed in the season’s first week that MLB.com’s video page no longer has a working search function. If you click it, this message is given: 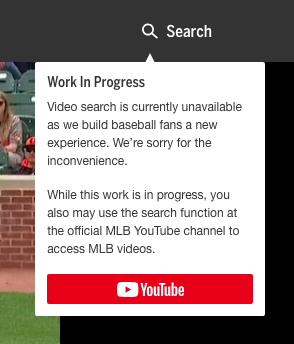 Maybe there will soon be a “new experience.” It takes a lot of work to build a robust, content-filled multimedia web page. But it seems strange to me that the building of this “new experience” began as soon as the season started and not during the months-long offseason when viewing and sharing baseball highlights is not exactly something people do a lot of. Or, perhaps, the “new experience” is really just a lack of production capacity due to the recently reported staff reductions at MLBAM. I have no idea.

Whatever the reason, for now, there are a handful of “most popular” videos displayed at MLB’s page each day, and some other assorted clips, many of which are not from recent game action. Anyone wishing to do what they could do until this year — find any notable play from any notable game and share the link or embed the clip — is out of luck. Oh, and the YouTube channel referenced there is mostly full of condensed games, not video highlights.

Earlier this week it was reported that Minor League Baseball has ordered teams to limit the number of game-action highlights that they tweet out. Why?

As reported by @TepidP, MiLB plans to limit the number of game-action highlights that teams tweet out in the near future.

An MiLB spokesperson provided this statement when asked about the new directive. pic.twitter.com/lWtRyf990B

If you know what that means you’re ahead of me. The most charitable interpretation of that dense graf is that, as is the case with the message given by the MLB.com search bar, MiLB plans to have some other, better video-sharing product out there soon. A less charitable interpretation of that is that they’re simply not wanting videos tweeted out because tweeted-out videos don’t contain 15-30 second preroll advertisements on them and it’s preferable for MiLB to get a few cents from each ignored clip for, I dunno, a moving logistics company than to have a fans sharing cool plays with one another, causing them to get more excited about the game. I suppose we’ll know which of these it is soon. The longer we go with no “new experience,” the more weight there will be to the latter explanation than the former.

The most recent datapoint of video clip revanchism comes from Baseball America. Baseball America, as you probably know, is the foremost source for minor league and amateur baseball news and information, full stop. It’s simply the place you go to learn about prospects. As part of that, Baseball America has long posted video clips of prospects working out and in game action. Think of them as scouting film or whatever. As of today, they will no longer do that. Why?

If this were the only thing that happened I might say “hey, they did not have the express written consent to transmit the pictures, descriptions and accounts . . .” yadda, yadda, yadda, and MiLB is simply protecting its intellectual property.

The issue, though, is partially one of timing: why now, when BA has been doing it for years? Why now, in the same week they have told teams to stop posting clips for which they actually have rights? It’s also one of common sense. Baseball America does more to promote minor league baseball than anyone. Why alienate such a great champion for your product? Are those potential pennies from the preroll ads so much that it outweighs the goodwill and free advertising BA gives minor league baseball? And, really, does MiLB even plan to replace those now gone scouting films of prospects in minor league games that BA used to do? I sorta doubt it, but I guess we’ll see.

One might say this is all a bid by MLB and MiLB to maximize revenue, but that makes no sense given that the cracking down on non-ad-generating video content is accompanied by . . . the virtual non-functionality of baseball’s ad-generating video platform. I mean, you see the videos we post here: they almost all have pre-roll ads. Far be it from us to deny MLB its money, but why not even make ad-fronted videos available? Why crack down on BA’s scouting film when it’s super unlikely that you’re ever going to produce a similar product yourself?

More broadly, why the overall hostile approach to video in general? As the NBA, NHL, NFL, MMA and WWE have learned, fans being able to share clips, highlights, GIFs and the like is a great way to generate interest in your product. Fans texting and tweeting cool and exciting moments is free advertising. Heck, if you slap ads on them, it’s people paying you to advertise.

Yet it’s almost impossible to do that with baseball highlights at the moment. Why?