Yankees 15, Orioles 3: With so many Yankees injured, someone needs to step up. I guess that someone is Gary Sánchez.  The Yankees catcher — although here he was DHing — hit three two-run home runs and the Bombers bombed seven in all, with Clint Frazier hitting two and Austin Romine and Gleyber Torres each hitting one. After dropping the opening series of the year at home to the Orioles, the Yankees swept ’em in Baltimore.

Pirates 7, Reds 5: The Pirates complete the four-game sweep, but you don’t care about that. You want to hear what I have to say about the fisticuffsmanship that went down. OK, let’s talk about it.

This is a Renaissance painting: 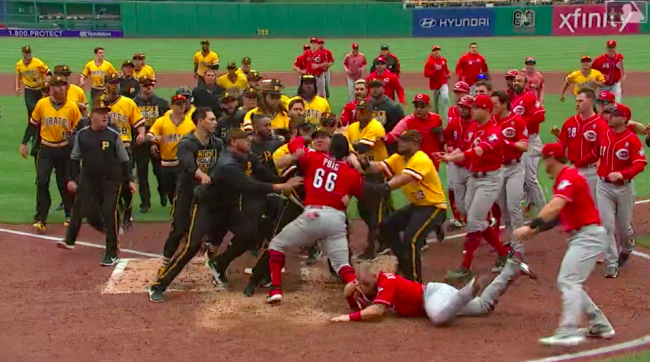 Yasiel Puig represents man’s struggle against the angels and The Fates, as represented by the Pirates. The power and the anger he exhibits is representative of Man’s new conception of himself as a new age of learning and reason was dawning and his sloughing off of the passive acceptance of his lot in the universe which characterized his medieval predecessors. If there is any doubt of this, note that Tucker Barnhart at Puig’s ankles represents The Church, feebly trying to hold Man but resigned to lose its grip — on both Puig/Man and on its ultimate power over the world of mortals. The lone Pirate/angel in the upper right, lost in a sea of men represents how even God Himself has lost His way. It’s a stunning piece, kept secret at the time of its completion on orders of Pope Sixtus IV, for fear of it enflaming passions and sowing unrest among the peasant class. Even now it is likely to be the subject of excommunications. To truly appreciate it, one must see it in person in the Palazzo Pitti in Florence, where it hangs.

Oh, and they made a video of it too in you’re interested.

The art of it all aside, Bill wrote all about the brawl yesterday and I don’t disagree with anything he said there. But can we talk about how, just an hour or so before this game, Chris Archer, the pitcher who set this all off by throwing at the home-run admiring Derek Dietrich because his feelings were hurt, was being lauded by his team’s Twitter account for fist-pumping and celebrating and doing all of the pitcher equivalents to admiring homers?

He’s having too much fun.
He’s too excited.
He shows too much emotion.

He’s our guy and we love it.

We can talk about unwritten rules and decorum and all of that, but it’s an old conversation. Let’s talk more about how pitchers are big, whiney, diaper-filling babies who are perfectly happy to dance and strut when they do something cool but who lose their damn minds if batters do. Grow up, pitchers. You’re embarrassing yourselves. Don’t want a guy admiring a 436-foot homer than lands in the dang river? Don’t give up a 436-foot homer that lands in the dang river. Problem solved.

Angels 7, Rangers 2: Mike Trout homered again, making it his fourth straight game with a homer. Five homers overall as he hit two on Friday. He walked three times yesterday too, meaning that he reached base 12 times in the four-game series, going 6-for-11 with five HRs and six walks. You aren’t gonna find many guys who have ever had a four-game series like that, I tell you what. This was Trout’s second four-game homer streak of his career. The all-time record is eight. The Angels team record is five, held by Bobby Bonds, who I bet you forgot played for the Angels, if you even ever knew. I’d go on about Bobby Bonds’ weird employment history — he had one season stints for four different teams, half seasons with two different teams, two years with the Angels and seven with the Giants — but I suppose this is an Angels recap. Nah, it’s a Trout recap. He’s the whole damn team.

Cardinals 4, Padres 1: This has nothing to do with this game, but on Saturday the sun came out and the Midwest thawed so I was doing some yard work. As I did so, I listened to the radio feed of the Cards-Padres game. Mike Wacha was in the process of issuing many a bases-on-balls and the Cards’ #2 radio guy, John Rooney, said “it’s more like Mike Walk-a-thon” and it put a smile on my face for an hour. I’d rather hear a quip like that to embellish that which I already know (i.e. that Mike Wacha didn’t have it) than to hear fifteen breakdowns about his arm angle and see a bunch of graphics explaining it or supercuts of all the ball fours. It’s baseball. Most of us watching or listening get it. If there’s something truly unique that most fans miss, by all means, enlighten us, but for the Love of God, when a pitcher can’t hit his mark we understand what’s happening. Keep it simple and keep it fun, broadcasters.

As for this game, Adam Wainwright had no such trouble, going six without walking a batter and striking out nine to help the Cards avoid the sweep.

Nationals 12, Mets 9: Anthony Rendon hit a homer for the fourth time in five games — sort of and inside-out of what Mike Trout did I guess — and Max Scherzer got the win even though this was the worst of his three starts on the season. Washington had a 12-1 lead by the seventh inning, so maybe he was pitching to the score or something (note: he was not doing that as that’s not a thing). Zack Wheeler walked seven guys in four and two-thirds innings. More like Zack Walker, am I right? (h/t John Rooney).

“It’s fun, but every day with this team is fun. Any time you wake up and look forward to coming to the ballpark, it makes your life a lot more fun.”

Let’s set a reminder to check in with him in mid-August to see how fun it is to be with the 2019 Mariners every day.

Brewers 4, Cubs 2: Christian Yelich hit his 100th career homer and drove in three. Josh Hader got an eight-out save. He’s amazing — he still hasn’t allowed a run and has only allowed one hit in five outings while striking out 13 in seven and two-thirds innings. Of course he’s on pace to pitch in 81 games and toss 113 innings or so right now so maybe Craig Counsell needs to ease up on the kid a little? The Cubs lost for the seventh time in eight games. At this rate Joe Maddon should avoid buying groceries in bulk and have a go-bag next to his office door at all times.

Tigers 3, Royals 1: The sweep. By the first place Detroit Tigers, who have won five straight overall. And of the Kansas City Royals, who have lost five straight overall. Don’t get used to that “first place Tigers” stuff or anything, but for now it’s gotta be kinda fun for them. It was fun for Tyson Ross yesterday, as he allowed only a run and five hits with a walk and eight strikeouts in seven innings of work. He had some really good defensive help, including from his catcher, John Hicks, who threw out both Billy Hamilton and Whit Merrifield. That’s no easy task.

Braves 4, Marlins 3: Braves reliever Arodys Vizcaino blew a one-run lead in the ninth but Dansby Swanson saved his bacon in the bottom half by knocking in Freddie Freeman with a walkoff single. Swanson also homered, giving the Braves that one-run lead Vizcaino blew. Swanson, who has fallen short of expectations in the first couple of years of his career, has sure as heck answered the bell for the 2019 season, hitting .346/.471/.731 with three homers and nine driven in his first six games. I’ve been on the Braves for months for not improving their team as much as they could’ve in the offseason but if Swanson breaks out big this year it’ll be as if they had added a bat. The front office doesn’t get credit for that, of course, because they could’ve added another bat or arm or something and then gotten the Swanson-boost plus more, but a Swanson breakout would help mitigate the damages brought on by the front offices stingy neglect.

Astros 9, Athletics 8: Houston wins on a walkoff walk as the A’s blow a two-run lead in the final two innings. A’s closer Blake Treinen was pouring kerosene all over the field in his inning and a third of work, walking four dudes. Not that this was just a bullpen fire of a game. Starter Mike Fiers gave up six runs on seven hits and walked four in an inning and two-thirds to put the A’s in a hole of their own. Quite a turnaround for him given that he entered the game having tossed 12 consecutive scoreless innings.

Rays 3, Giants 0: The Rays keep on chugging, with five pitchers combining for a five-hit, 12-strikeout shutout. When you shuffle pitchers in like the Rays do, sometimes you gotta shuffle them out and back in again. How? Like the way Kevin Cash did with reliever Adam Kolarek. Kolreak pitched a perfect sixth inning, came back out for the seventh and gave up a leadoff single. He was then shifted over to play first base so Cash could bring in righty Chaz Roe to face righty Evan Longoria. Roe struck Longoria out and was replaced by Kolarek, who returned to the mound to strike out lefty Brandon Belt. He gave up a hit to the next batter and then was take out of the game for good. Wheeee.

Red Sox 1, Diamondbacks 0: The Red Sox came into the season with one of the best rotations in all of baseball, at least on paper. A week and change in and they were 2-8 and that much touted rotation was getting shelled on the regular. Sunday comes and it’s a bullpen day for the Bosox and, bam, five relievers combine for a shutout, making a seventh inning Mitch Moreland dinger hold up.

Dodgers 12, Rockies 6: The very, very fast start of Cody Bellinger continues as he had three hits, smacked his seventh homer and scored four times to help the Dodgers complete the sweep. A sweep in which they never once trailed the Rockies who, presumably, are to the L.A.’s toughest competition in the. N.L. West this year. Quite the presumption at this point, really, given that they have lost seven of eight on the young season.