There’s an old saying in the newspaper business: “if your mother says she loves you, check it out.” The idea: don’t just trust one source on a matter. Make dang sure you got the facts right.

That’s obviously more of a guideline than a rule, of course. If you are given basic and straightforward information that you have no real reason to doubt, you can generally go with an official comment on a matter, especially if the matter is not super important in the grand scheme of things.

Some people, though, really hold to that “check it out” ethos. Even if they’re not journalists. We saw this yesterday after the Toronto Blue Jays Twitter feed posted the lineup for the team’s game against the Indians:

A fan had a question about the starting first baseman: 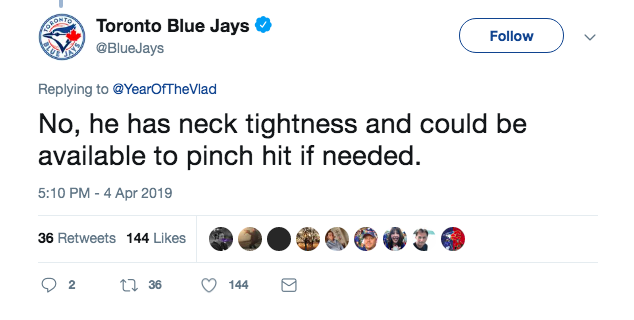 The fan . . . was skeptical for some reason?

The Blue Jays put his mind at rest:

To be fair, it would only be prudent to press for a second source on the matter if this was, say, the Mets Twitter feed talking about an injury to a Mets player. From what I’ve observed, though, the Blue Jays are a pretty good source when it comes to Blue Jays lineup decisions. You can probably trust ’em.