Former Met and current Mets broadcaster Ron Darling has a new book out. It’s called “108 Stitches: Loose Threads, Ripping Yarns, and the Darndest Characters from My Time in the Game,” and it was released on Tuesday. As you might expect, it has a lot of stories about those crazy mid-80s Mets team of which Darling was a part.

One anecdote is getting significant play at the moment. It involves Lenny Dykstra and Dennis “Oil Can” Boyd of the Boston Red Sox. Darling says that before Game 3 of the 1986 World Series Dykstra was “shouting every imaginable and unimaginable insult and expletive in his [Boyd’s] direction — foul, racist, hateful, hurtful stuff” when he was in the on-deck circle before leading off the game.

Dykstra says that didn’t happen and, on a Monday radio appearance, he threatened to sue Darling. He also said he would “drop [Darling] like a red-headed f—ing stepchild” if he saw him. In his corner are former Mets teammates Dwight Gooden and Kevin Mitchell who said they never heard Dykstra yell racial slurs at Boyd, who is black. Darling responded on Tuesday saying “I heard what I heard and I put it in the book for a reason,” and says that other Mets teammates support his account. Boyd said this week that he did not hear Dykstra shouting anything at him but that he believes Darling.

Dykstra responded, repeatedly referring to Darling as “Jussie Darling,” apparently trying to equate him with Jussie Smollett, the actor who was initially accused of making up a false racially-motivated assault before charges against him were dropped. Which is a rather interesting comp given all of the politics and agendas at play in the Smollett story, but let’s leave that aside. That aside, Dykstra parses Darling’s statement, slamming him for using the passive voice and for not offering up something stronger than that he “stand[s] by all recollections that were written.” He also uses emojis to call Darling a rat: 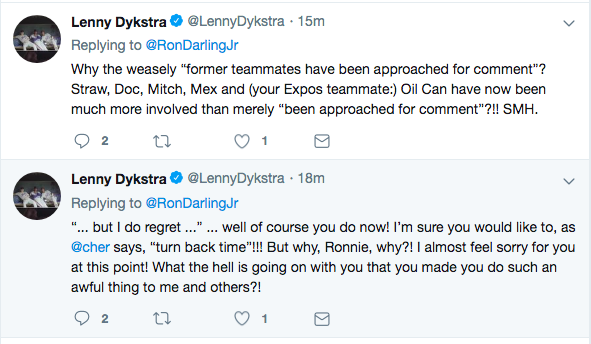 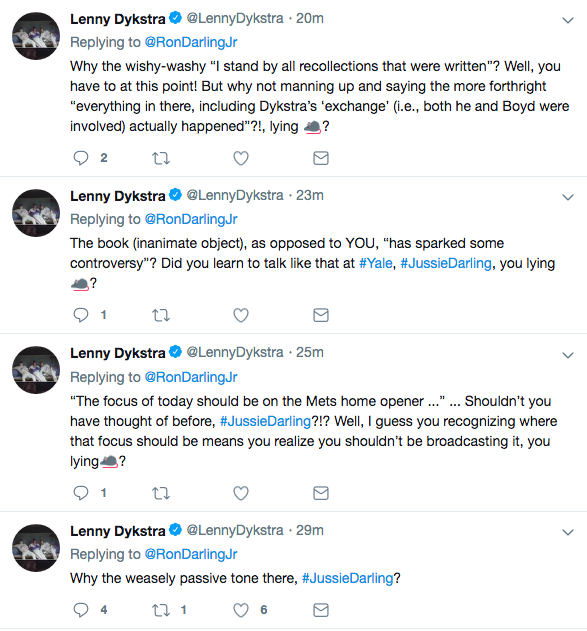 Whether Dykstra actually shouted slurs may be difficult to establish with 100% certainly given the passage of time and, one presumes, the lack of video and audio of such a thing. It’s also worth noting that Dykstra would have a strong incentive to deny he did such a thing, even if he did it. As for teammates, saying one did not hear something happened is not the same thing as saying that it did not happen. It’ll be interesting to see if Mets teammates come forward to corroborate Darling’s account or if any beyond Gooden and Mitchell come forward to support Dykstra.

It’ll also be interesting to see if Dykstra follows through on his threat to sue, even if his case for a suit is strong on the merits. A defamation suit’s damages are, at heart, reputation damages, and Dykstra, as we know, has something less than a glowing reputation. Of particular note is the fact that there have been many past claims, including in books, of Dykstra being a racist. Dykstra didn’t sue over that. It’s also pretty notable that a key part of his bad reputation has to do with dishonesty — he did time for fraud — which presents sort of a problem when it comes to making legal claims that someone is lying about you. It’s also the case that Dykstra himself has made super questionable claims about stuff he did during his playing career which, to say the least, muddy the waters about both his capacity to tell the truth and about how good and pure a guy he was.