Home plate umpire Ron Kulpa didn’t take too kindly to complaining from the Astros’ dugout after missing a couple of calls early in Wednesday’s game between the Astros and Rangers at Globe Life Park in Arlington.

Kulpa first missed a very obvious strike from starter Gerrit Cole against Joey Gallo in the bottom of the first inning. The pitch, which would have been strike three for the final out of the inning, was so obviously a strike that Cole was already walking off the mound towards the dugout. Here’s what Statcast said (the pitch is No. 5): 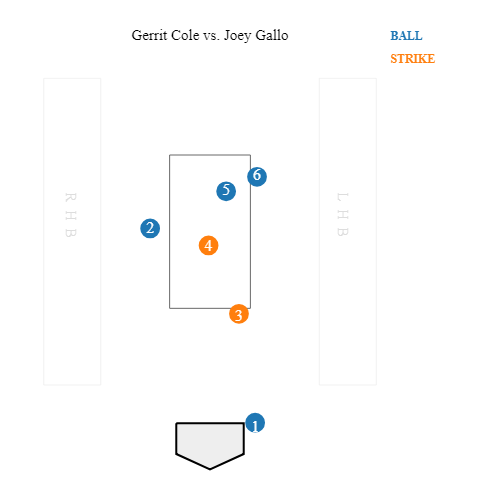 In the top of the second inning, Rangers starter Mike Minor threw a first-pitch slider to Tyler White that ducked under the strike zone. Kulpa called it a strike. Statcast says he was wrong. 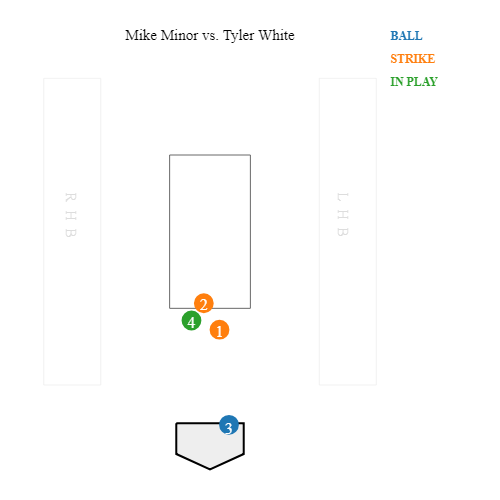 Kulpa was barked at by various members of the Astros’ dugout, notably hitting coach Alex Cintron. Kulpa took off his mask, stepped away from home plate, and started screaming back into the Astros’ dugout. Manager A.J. Hinch came out to talk things over with Kulpa, which seemed to cool the situation. However, Kulpa continued to stare into the Astros’ dugout even as Minor was getting ready to throw his next pitch.

The field mics and the Astros’ broadcast cameras caught Hinch saying to Kulpa, “Don’t look over here.” Sage advice, considering Kulpa’s job is to help officiate a ballgame. Kulpa took off his mask again and stepped towards the Astros’ dugout, pointing at Cintron and ejecting him. Hinch met Kulpa outside the dugout and the two talked it over some more. Hinch, at this point, remained unejected.

Minor was finally allowed to throw his second pitch to White, another strike that actually caught the strike zone this time. Kulpa continued to gawk into the Astros’ dugout. The field pics picked up Hinch saying, “You can’t keep doing it. You can’t keep doing it.” Hinch stepped out of the dugout and Kulpa ejected him.

After getting the final out of the third inning, Cole walked off the mound silently and didn’t even make eye contact with Kulpa. Kulpa shouted as Cole as he was walking to the dugout. Cole said something — it’s unclear what, but it was very brief — and walked off. Kulpa then had some words with catcher Max Stassi.

Update: After the sixth inning, Cole knew he was done for the evening, so he had some words with Kulpa on his way out. Cole seemed upset, but controlled.

Cole finished his evening with a lengthy conversation with Kulpa before heading to the dugout.

Kulpa, 50, has been an umpire in the majors since 1998. He is not new to creating drama on the field. Should Cintron and others in the Astros’ dugout have been hectoring Kulpa as much as they were? Of course not. But Kulpa should be focused on reducing and resolving conflict, not throwing gas on the fire. As we have seen, umpires are rarely held accountable for their conduct on the field, which is why they have no problem exacerbating issues with players and coaches.

The Baltimore Orioles and Maryland Gov. Wes Moore announced a joint commitment to what they called a “multi-decade, public-private partnership” to revitalize the Camden Yards sports complex.

The statement from the team and the state’s new governor came Wednesday, the deadline for the Orioles to exercise a one-time, five-year extension to their lease at Camden Yards. The team was not planning to exercise that option, according to a person with knowledge of the decision. The person spoke to The Associated Press on condition of anonymity because the club hadn’t announced its decision.

With no extension, the lease is set to expire at the end of this year, but the team and the Maryland Stadium Authority can keep negotiating. Wednesday’s joint release seemed to be an attempt to calm any nerves in Baltimore about the team’s future.

“I am looking forward to continuing to collaborate with Governor Moore, his administration, and the Maryland Stadium Authority in order to bring to Baltimore the modern, sustainable, and electrifying sports and entertainment destination the state of Maryland deserves,” Orioles CEO John Angelos said.

“We greatly appreciate Governor Moore’s vision and commitment as we seize the tremendous opportunity to redefine the paradigm of what a Major League Baseball venue represents and thereby revitalize downtown Baltimore. It is my hope and expectation that, together with Governor Moore and the new members and new chairman of the MSA board, we can again fully realize the potential of Camden Yards to serve as a catalyst for Baltimore’s second renaissance.”

Republican Larry Hogan, the state’s previous governor, signed a bill last year increasing bond authorization for M&T Bank Stadium, home of the Baltimore Ravens, and Camden Yards. The measure allowed borrowing of up to $600 million for each stadium.

“When Camden Yards opened 30 years ago, the Baltimore Orioles revolutionized baseball and set the bar for the fan experience,” Moore, a Democrat, said Wednesday. “We share the commitment of the Orioles organization to ensuring that the team is playing in a world-class facility at Camden Yards for decades to come and are excited to advance our public-private partnership.”

Angelos recently reaffirmed that the Orioles would stay in Baltimore, although he dressed down a reporter who asked for more clarity on the future of the team’s ownership situation. Angelos was sued last year by his brother Lou, who claimed John Angelos seized control of the Orioles at his expense.