Deadspin has a massive story today about the sale of the Chicago Cubs to the Ricketts family ten years ago. It’s sourced by leaked emails from family patriarch Joe Ricketts’ inbox. It contains deal points, presentations from bankers, lawyers and consultants and communications between and among members of the Ricketts family.

And boy oh boy it is a treasure trove of information about the state of modern baseball economics. It’s must-click material. 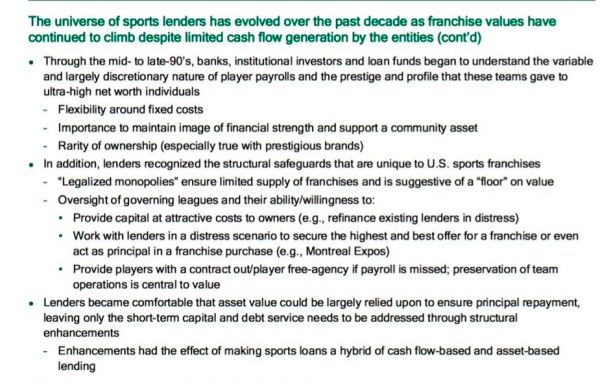 The short version: owners are basically insulated from the consequences of bad business. They have a legal monopoly and can get away with all manner of things other businesses can’t. They can cut payroll if they want to. Since franchises don’t depreciate in value, they can bail out by selling, even if they’re losing money. If things get really bad they can rely on local governments to grant them new revenue streams with tax dollars or, worst case scenario, the league will bail them out.

We’ve touched on all of these things here before. There’s always a group of readers, though, who say I’m just a flaming pinko lefty for bringing that up. Know, now, that it’s not just me, but actual Wall Street folks who consider this to be the defining feature of baseball ownership.

In light of that, I would ask those of you who like to go on about how much risk owners take on and how harrowing a financial path they are traveling in the uncertain, rough and tumble world of professional sports to print that slide out on adhesive paper and smack it to your foreheads.

Not that the business of baseball is guaranteed to be idiot-proof forever. One key component of the Cubs sale, and of all other recent team sales, is massive debt.

The Deadspin story does a great job of revealing just how dependent upon debt modern baseball ownership truly is. We know owners take on a lot of debt to purchase teams, but the size and structure of that debt is hard to get your brain around until you see it written out in black and white like it is here. Major League Baseball has rules about how much debt an ownership group can take on but, as the Ricketts case makes clear, they are easily circumvented and often ignored by MLB.

The reason for that debt is soaring franchise costs. Teams are expensive now! They are expensive because revenue streams, particularly from cable television, have spiraled upward. Despite the allegedly bad cash flow of big league clubs, Wall Street, eager to get a cut of that action, has freed up capital to give to would-be team owners. As more would-be team owners enter into bidding armed with billions, the sale prices go up and up.

The consequence of that debt: a lot of revenue goes to debt service, strapping the cash flow of ownership groups. At least theoretically. Since we have no access to most teams’ books we don’t know how strapped that cash flow is by the debt payments, but it would seem to me that either (a) debt service from owners is cutting into cash flow, thereby limiting what they can pay players; or (b) the reported debt provides a handy excuse for teams to say they can’t pay players more due to debt service. Those aren’t mutually-exclusive, of course. Could be a bit of both. I’ll also add that this could provide some insight into why Major League Baseball doesn’t seem all that concerned with policing its own debt limits. It’s better for owners if revenues go to debt service than to the players, right? Once it goes to the players its gone. If it goes to Wall Street, it keeps Wall Street happy which could benefit owners down the line.

Of course, a possible down-the-road consequence of all of this is something we’ve talked about a lot here before: what happens if the big TV deals which fuel this bubble dry up and causes it to burst? What if cable networks decide that it’s simply not worth paying a team $3 billion to broadcast games? What if a cable network declares bankruptcy to get out of an existing TV deal? What if, like every other media sector, the Internet finally outflanks legacy media in baseball broadcasting and causes its value to plummet?