Mariners 12, Red Sox 4: The Mariners beat the livin’ tar out of Chris Sale and the defending World Series champs, just like everyone expected, yes? Tim Beckham, who everyone has forgotten was the former number one overall pick in the draft back when George W. Bush was still president, hit two homers, which gives him three on the year. Thank God the Orioles non-tendered him to save that arbitration salary or else they’d have a real hitter on their hands. Domingo Santana, meanwhile, went 3-for-5 with a homer, a double and four RBI himself and now has nine RBI on the year. Edwin Encarnacion added a solo shot. What would happen if the Mariners never lost a game? What if they traded away all their talent, cut their payroll and went 162-0? Makes you think.

Mets 2, Nationals 0: A fantastic pitcher’s duel for six innings at which point Nats manager Dave Martinez screwed up by having Max Scherzer hit for himself in a one-run game in the seventh despite sitting at 93 pitches.  He struck out, of course, came back out for the seventh, retired two batters but put one on, got yanked and the runner he put on came around to score. Sure, that’s bad, but when you consider how gassed the Nats’ bullpen is, you have to unders— [someone whispers to me], oh, forgot. It’s Opening Day. So no, I have no idea what Martinez was thinking. All I know is that (a) Nats fans are demanding that their manager be fired on literally the first day of the season; (b) Jacob deGrom struck out 10 in six shutout innings; and (c) Robinson Cano homered and singled in a run, taking care of the game’s only scoring. Nice Opening Day for New York.

Yankees 7, Orioles 2: Luke Voit knocked in a run via a bases-loaded hit-by-pitch and hit a three-run homer, but let’s not pretend that’s a great accomplishment against the Orioles because . . .

In fairness, we all knew Luke Voit could hit AAA pitching

Sorry. But I gotta tell ya, there are gonna be a lot of cheap shots against the O’s this year. The faster y’all get used to it the better this will go.

In other news, in the bottom of the 7th, with runners on first and second, Gary Sanchez popped up, the catcher dropped the popup, the infield fly rule was called, both teams forget that the infield fly rule existed, and thus Miguel Andujar needlessly ran to second, the Orioles threw the ball there for a nonexistent force out, that confused the other baserunner, Voit, who got caught in a rundown and the ball was thrown all over the place. I know spring training ended earlier this week, but there is still some ramp-up needed for everyone.

Phillies 10, Braves 4: Well that was a beat-down. I’m trying to decide what my favorite part was. Andrew McCutchen hitting a leadoff homer after an offseason in which I yelled at the Braves to sign him, only to see him go to Philly, or when the Braves intentionally walked an 0-for-3 and obviously-pressing-in-his-Philly-debut Bryce Harper to pitch to Rhys Hoskins, only to watch Hoskins hit a grand slam? It was all wonderful, really. Congratulations to the Phillies on a convincing win in their first game in a bold new era. But congratulations to the Braves too, for keeping their “glide slope,” their “monetary yield,” and their ability to shop in any aisle intact.

Astros 5, Rays 1: A three-run homer for George Springer and solo shots from Jose Altuve and Michael Brantley was more than Justin Verlander needed to beat the Rays. Verlander allowed only one run over seven and struck out nine, actually, so he really didn’t even need that much. I’ll note that Brantley is yet another outfielder I wanted the Braves to sign this past offseason. But again: glide slope. Gotta keep your eyes on the prize.

Dodgers 12, Diamondbacks 5: After I got sick of the Braves game I switched to this one just as the Dodgers hitters started really putting the lumber to Zack Greinke. And it was some historic lumber: eight round-trippers in all, setting an Opening Day record. It was just the 25th eight-homer game overall since 1908. Greinke’s line: 3.2 IP, 7 R, 4 HR, and a 17.18 ERA until his next start. Oh, and he was booed off the field, because Dodgers fans really don’t like him anymore. The damage done: two homers each from Joc Pederson and Kiké Hernandez, and one a piece from Austin Barnes, Corey Seager, Max Muncy and Cody Bellinger.

Brewers 5, Cardinals 4: The Cards jumped out to a 3-0 lead thanks to dongs from Kolten Wong and Harrison Bader, but then fell down 5-3 thanks to dongs from Mike Moustakas, Christian Yelich and . . . Jhoulys Chacin? OK, then! It’s always good to [all together now] help your own cause. Another Wong dong would make it 5-4, but then the game ended when Lorenzo Cain robbed Jose Martínez of a game-tying solo dong to end the game. Lotsa dongs, but one dong too few for the Cards.

Twins 2, Indians 0: Berrios outduels Kluber, striking out ten little Indians in seven and two-thirds. A two-run double from Marwin Gonzalez — hey, a free agent already paying dividends! — was the game’s only scoring. Indians outfielders combined to go 1-for-10 on the day. They should probably get used to that.

Padres 2, Giants 0: Speaking of bad outfields, the Giants chose to go with an Opening Day group of Connor Joe, Steven Duggar and Michael Reed. They, and their pinch-hitters and fill-ins, went 0-for-9. Manny Machado took an 0-for-3 in his first game as a Padre and struck out twice, but the San Diego pitching staff was dandy. Starter Eric Lauer tossed six scoreless and four relievers completed the shutout, allowing only five Giant hits on the day.

Athletics 4, Angels 0: Mike Fiers and three relievers combined for the fourth shutout on the afternoon while Khris Davis and Marcus Semien went deep. Mike Trout only had one hit. For $430 million he should’ve hit, like, ten homers, right? Yes, that’s how it works. I think it’s fun that it’s Opening Day and Fiers is 1-1 on the season.

Tigers 2, Blue Jays 0: This was a dual no-hitter between Marcus Stroman and Jordan Zimmermann through five innings. Zimmermann took a perfecto into the seventh and ended up leaving having allowed only one hit. The only scoring in the game came from Christin Stewart who hit a two-run homer in the top of the tenth to win it for the Tigers.

Afterwards, I got this text from my Detroit-born-and-raised father-in-law: 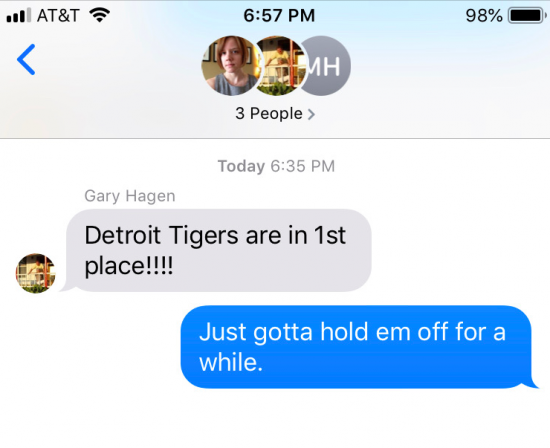 That thing I said yesterday about being real about the baseball season notwithstanding? Yeah, it still stands, but you gotta have some hope, man.

Rockies 6, Marlins 3:  Kyle Freeland allowed two hits and one run in seven innings as the Rockies take the first game of the annual 1993 Expansion Team Series. Not that anyone keeps track of that apart from me. Some people ask what the winner of the 1993 Expansion Team Series gets. The answer: copies of the Original Motion Picture Soundtrack to “The Bodyguard,” obviously. Anyway, Trevor Story hit a solo shot. David Dahl had three hits and scored twice.

Reds 5, Pirates 3: Jose Peraza hit a solo shot to tie the game at two in the seventh and then new Red Derek Dietrich hit a three-run homer that same inning to put Cincinnati up comfortably. Yasiel Puig went 0-for-4 with two Ks in his first game as a not-Dodger. Jose Iglesias doubled twice and drove in a run in his first game as a non-Tiger or Red Sock.

Speaking of Puig, check out Bill Plashcke being ever so happy Puig is gone:

It’s a much calmer clubhouse, yes. Now that Puig can no longer entice, um, murderous Mexican gangs to Dodger Stadium or whatever the hell it was Plaschke thought Puig was responsible for back in the day.

Cubs 12, Rangers 4: A six-run fifth inning gave Jon Lester all the support he’d need. Javier Baez homered twice and drove in four. Kris Bryant hit a two-run homer and drove in three. I guess not eating junk food anymore paid off.  Twelve pitchers used in this one. I usually complain about that kind of thing but imagine what might’ve happened if the Nationals had bothered to even use one more than they did.

Royals 5, White Sox 3:   Brad Keller pitched two-hit ball over seven shutout innings, Adalberto Mondesi tripled twice. This one was delayed two hours by rain. Which was annoying for a few minutes before I remembered that we’ve had snow-outs and multiple rain postponements on these early Opening Days in the past. Man, we got lucky with good weather yesterday, didn’t we? Eloy Jimenez went 0-for-3 with an RBI in his major league debut. Maybe he needed to work on his defense down in the minors more?

Thanks for coming back, folks. We’ll be doing this every weekday for the next six months and change. Settle in and relax. Baseball is back.