Back in November we learned about the seating and pricing for the London Series games between the Yankees and the Red Sox. The upshot: seats are expensive: the nosebleeds in the outfield were set at $76 a piece. Outfield bleacher seats were $153. Anything better than bleachers or a mile away on a distant, outer ring of the stadium began at nearly $300 a pop. Sitting in the premium seats behind home plate: $500. All of that before “service charges and handling fees,” which everyone knows are significant ad-ons to ticket prices.

Well, those tickets sold out. What’s more, the sellout inspired the organizers of the affair to add even more seats: 5,000 to be precise: 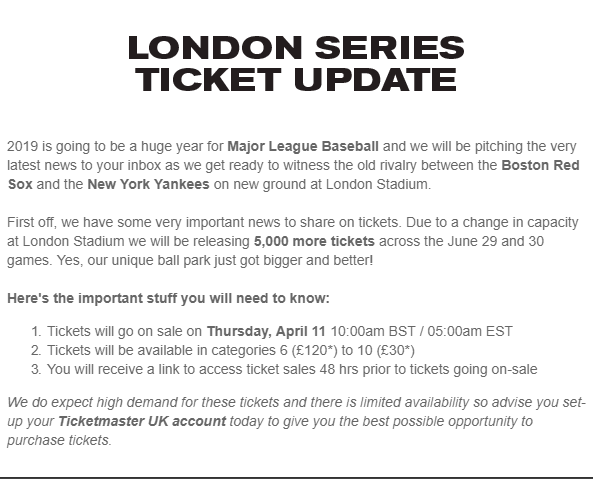 I have an American friend who lives in the UK who has some nosebleed tickets to the series. His seats, he says, “are on the left field foul line, at the top of the stadium. The only thing behind me is a long fall.” He paid £150 for those, which is just under $200. Given that those seats are already in the stratosphere, I can’t imagine how bad these new £30 — around $40 — seats will be.

As I wrote back in November, I fully understand that tickets for this game are in super high demand due to it being a unique event. Thus the high prices, thus the sellout and thus the addition of even more seats. The market is the market and MLB is taking its lead from the market.

But I can’t imagine the product is going to be good for anyone paying anything short of several hundred dollars per seat. While one would hope that the biggest takeaway of a newly-created British baseball fan would be how amazing Mookie Betts and Aaron Judge are, the vast majority of spectators are going to have a terrible view and will get almost nothing out of the experience other than the ability to say “I was there.”

Major League Baseball can follow the market and maximize revenue from this contest or it can provide a good product that will please fans and, hopefully, spur interest and growth in baseball in the United Kingdom. It does not seem to me, however, that it can do both. They have apparently chosen which path to take.