Two weeks ago Rob Manfred was given an award from the National Congress of American Indians for his leadership in getting the Cleveland Indians to get rid of the Chief Wahoo logo. Admirable! We were, quite obviously, big fans of that.

But what about other Native American iconography in baseball, Rob? What about the Indians and Braves names and the Braves’ infamous “Tomahawk Chop?” From the Washington Post on February 11:

There is still the matter of erasing the nickname Indians from the Cleveland club. And there is baseball’s Atlanta club, which has been fighting to get its fans to stop cheering the team by employing the so-called tomahawk chop — an invention of those who colonized and all but exterminated native people that purports native people as violent.

“The Braves have taken steps to take out the tomahawk chop,” Manfred said. “I’d be remiss if I didn’t mention that.”

What kind of steps? No one knows. But we do know, thanks to Deadspin, that the Braves are still selling t-shirts that serve as Tomahawk Chop instructional aides right on the MLB.com website: 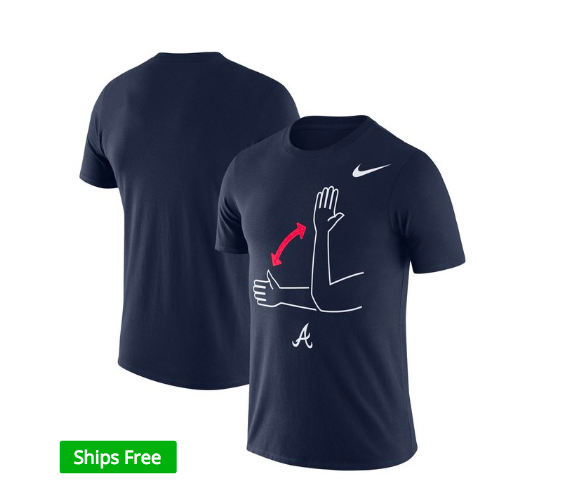 I’m so old that I remember when Braves fans didn’t do the chop. It became a thing when they began winning in the early 90s and it is 100% a function of the club prompting fans to do it with foam tomahawk giveaways, musical and scoreboard cues and, on occasion, famous people in the stands leading the chopping. If the “steps” the Braves have taken to stop doing that include cutting out the music and the chop-leading, hey, that’s great, but I feel like we’d have heard they were doing that by now.

Oh wait: they’re giving away foam tomahawks for their home opener on April 1. And their annual Fan Fest still continues to be called “Chop Fest.”

In the meantime, get your officially licensed Tomahawk Chop gear at MLB.com! A website that likely doesn’t intend to make the Commissioner of Baseball look like he’s being either clueless or transparently disingenuous — it has to be one, right? — but which is nonetheless doing a great job with it.

I suppose that’s great of the Braves to have gotten rid of Noc-a-Homa, but that was also 33 years ago. In the meantime, one wonders what Manfred does think of the Tomahawk Chop which, as the linked story makes clear, is not going anywhere.

CHICAGO — The Chicago White Sox bolstered their rotation, agreeing to a one-year contract with right-hander Mike Clevinger, a person familiar with the agreement told The Associated Press.

The person spoke on condition of anonymity because the deal was subject to a successful physical.

Chicago is looking to bounce back from a disappointing 2022 season, when it went 81-81 and finished 11 games back of surprising AL Central champion Cleveland. Hall of Fame manager Tony La Russa stepped down in October and Pedro Grifol was hired on Nov. 1.

The White Sox got a big lift from Johnny Cueto this year, but the 36-year-old right-hander is a free agent after going 8-10 with a 3.35 ERA in 25 appearances. Clevinger slots into a rotation that likely will include Dylan Cease, Lance Lynn, Lucas Giolito and Michael Kopech.

The move puts the 6-foot-4 Clevinger back in the AL Central after he made his major league debut with Cleveland in 2016. He went 42-22 with a 3.20 ERA in four-plus seasons with Cleveland before he was traded to San Diego in a multiplayer deal in August 2020.

Clevinger was selected by the Los Angeles Angels in the fourth round of the 2011 amateur draft. He was traded to Cleveland in 2014.