I’ve taken the Braves to task quite a bit in this space lately. This post and then, later, this post got a lot of attention, both from Braves fans who agree and nod their head and those who disagree and think I’m an overly cynical bad fan or whatever.

I don’t think I’m a bad fan or that I’m cynical. I just look at the facts on the ground and draw conclusions from them. The overarching fact that seems to matter here — separate and apart from any individual move or non-move the Braves front office makes — is that the Braves, as an organization, have interests other than winning baseball games and those interests, in turn, cannot help but impact the Braves’ approach to winning baseball games.

Interests like real estate. As the Cobb Business Journal reported yesterday, the Braves are involved in a complex bond transaction, the details of which bore me, but the upshot of which is that the Braves are building office towers:

The Development Authority of Cobb County signed off on a necessary step for the Braves to get the loan on Tuesday . . . Jonathan Smith, deputy general counsel for the Braves, said at Tuesday’s meeting that the project will span about four acres owned by the Braves. About half the land is being leased by Thyssenkrupp for the R&D tower, which the German conglomerate will own.

This is all part of the Battery complex which surrounds SunTrust Park and in which the Braves — through a vehicle called Braves Development Company — have a substantial interest. When you appreciate the magnitude of that development and the sort of revenue the Braves are realizing from it now and will realize in the future, it’s hard not to conclude that the Braves did not get SunTrust Park built for them simply or even primarily to become a more competitive baseball team. They got it built for them so that they can become a real estate development company that happens to have a baseball team as one of its many components.

And don’t think that that the relationship between the development and the ball club is some weak and attenuated thing. Check out the Braves’ org chart, as set forth on MLB.com, with my highlight added: 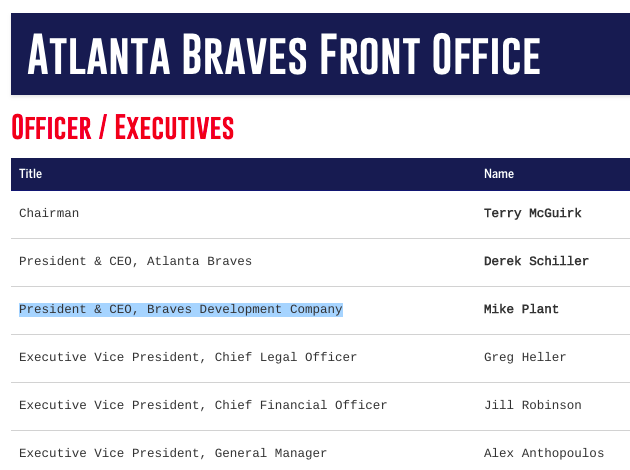 Whatever the legal relationship is between Braves Development Company and the baseball team, both entities answer to Terry McGuirk, apparently on equal footing based on the titles of the people who run them. As such, when McGuirk says, as he did last week, that he “couldn’t be more optimistic” about the Atlanta Braves, it makes one wonder if he means the baseball team or the overall venture, only one part of which is concerned with baseball. Indeed, one of his answers to the question about why all the increased revenues aren’t being plowed into the team was “it costs a lot to build this edifice.” That answer was likely more literal than most people understood.

Sure, the Braves want to win — I truly believe them when they say they want to — but achieving that desire is far less critical to the Braves, financially speaking, than it would be if they did not have office towers to build, own and lease out with favorable tax treatment and other governmental assistance. The hit from missing the playoffs, for example, is a drop in the bucket compared to what it might’ve been back when they played in Turner Field or Fulton County Stadium. At the same time, money that is realized by the Braves, their real estate ventures, or both, can be used in any number of ways. Maybe the baseball team is the priority sometimes. Maybe it’s not.

Observing that does not make one cynical. The Braves are a baseball team with real estate interests. Or maybe they’re a real estate company with baseball interests. The proper way to characterize that depends on a lot of stuff about their financials and their priorities the Braves are likely unwilling to share with us, but it’s a simple fact that they have priorities that have little if anything to do with baseball. It’s fair game, then, to question the organization’s priorities when scrutinizing the baseball decisions they make.