The first Spring Training workout dates, both for pitchers and catchers and for full squads, has been released for all 30 of the Major League clubs. I find that rather weird given that there are scores and scores of players who don’t have jobs yet, but I guess a schedule is a schedule.

The earliest pitcher and catcher date is February 11, for the Oakland Athletics. They play the Mariners in an early series in Japan, which technically is part of the regular season but which takes place while spring training is still happening, so the early date makes sense. The Mariners are the next day. Everyone else begins on either the 13th or the 14th. Everyone except the Braves, that is, who don’t get going until the 16th for some reason. Fashionably late, I suppose.

Full workout dates fall into that same pattern. February 16 for the A’s and M’s, the 18th or 19th for everyone else and the 21st for the Braves.

As you can see, the dates are brought to you by Camping World. Which, because this is “camp” makes a lot more sense than them sponsoring the playoffs, but what do I know? 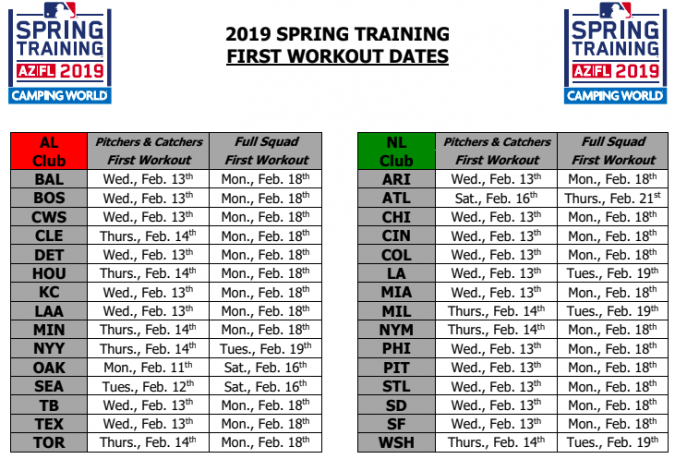