The Ricketts family is one of America’s wealthiest and most powerful families. In case you are unaware:

But the Cubs are not just Tom’s business. Controlling interest of the team is owned by the family as a whole. Tom is merely the one in charge on a day to day basis. The entire family has a say in how the team is run.

I lay that all out because, over at The Splinter, Molly Osberg has published a trove of emails and documents from the Ricketts family, as a part of an ongoing series in which she, well, does that. Most of the emails deal with family financial management and economic and political matters — go read all of them if you want to get a glimpse into how the top sliver of America’s wealthy view the world — but a few of them talk about the Cubs. And they’re pretty illuminating.

For example, you may recall that the Ricketts family tried for years to get either Chicago or the state of Illinois to pay for its renovation of Wrigley Field. Which they, in the end, did not. As that was going down, the Ricketts family was quite upset. Insulted, even! 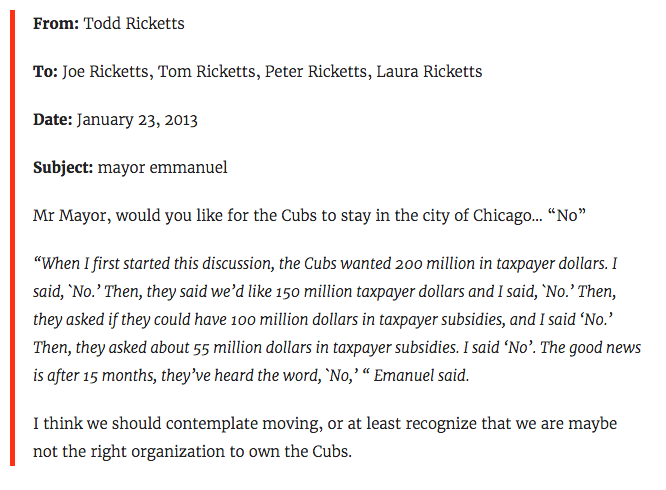 What gets me here is the entitlement. When a government official says he will not give a private business owned by billionaires a subsidy to improve its facilities, it is construed as “public official does not want us here.” As if it is completely and utterly inconceivable to them that there is another option, involving them actually investing in their own for-profit business.

I will say, though, the bit about “I think we should contemplate moving” answers an age-old question I’ve had about such matters. Specifically, “do they actually think people will believe they’ll move the team if they don’t get their subsidy?” Welp, yes. At least this billionaire believes that, if Chicago didn’t give them money for Wrigley, they’d move out to Naperville or something. I can’t decide if that’s more dumb than callous or more callous than dumb.

A followup email from the same day:

This one perplexes me. The only way I read this is him saying “hey, we bought your city’s falling down stadium, the LEAST you could do is pay us to fix it up.” If I’m missing a potential interpretation here, by all means, let me know!

As the old saying goes, the rich are different than you and me. They ain’t better, they ain’t smarter, but they’re certainly different.