The London Series between the Yankees and the Red Sox will be played on June 29-30 at London Stadium, the site of the 2012 Olympic Games and the current home of West Ham United of the English Premier League. The estimated capacity of the place once converted for baseball is 55,000.

That’s a lot for baseball anywhere, including in the United States. Only one major league ballpark — Dodger Stadium — can hold that many people and ballparks are now typically designed or renovated to hold far fewer. There are lots of reasons for that, but one big reason is that it’s hard to reliably draw 50,000 people to a baseball game. Especially when you charge more and more for tickets, which teams are doing.

If filling an American ballpark with more than 50,000 people is hard, imagine how hard it might be to fill a stadium in the UK, where baseball is a weird and largely unknown thing. One would think, in that situation, the tickets may be a little cheaper, just like you would think that tickets to a big cricket or rugby match might be inexpensive here. If that is what one was thinking about the London Series, one would be thinking wrong: 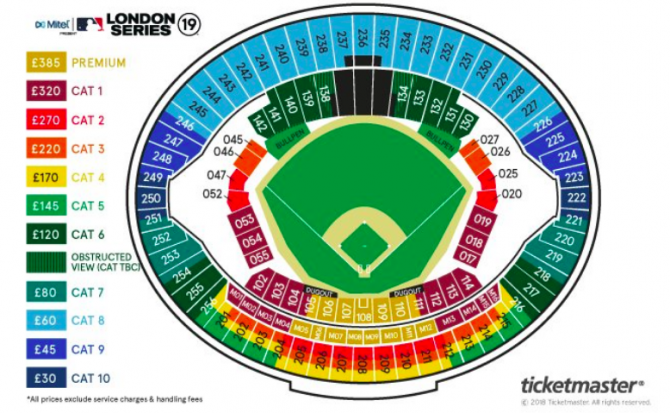 Remember, that’s pounds, not dollars. To convert, add around 28% to the prices listed.

So, the nosebleeds in the outfield — which, based on some fan photos from that stadium I’ve seen are not in any way close given the way the place will be laid out for baseball — are $76 a piece. Outfield bleachers are $153. Anything better than bleachers or a mile away on that outer ring begin at nearly $300 a pop. Sitting in the premium seats behind home plate will cost you and Marlins Man around $500. And remember, this is before “service charges and handling fees,” which everyone knows are significant ad-ons to ticket prices when Ticketmaster is involved.

Am I surprised that there are expensive seats? God no. This is London, everything is expensive in London and this is a big jewel event for those promoting it and premium pricing is always a part of that deal. What I am surprised at is the breakdown and proportion of premium-to-cheap. No one should have expected tickets behind the plate or down the baseline to be $40 or something, but just how many of these tickets are in the several hundred dollars range is rather shocking. The NFL, which has a 30-year head start on baseball in playing in the UK, typically has several tiers of non-premium seats for far less.

I presume the stadium will still be full because, again, this is London and my impression is that there is no shortage of people who will pay to see and be seen at a highly-hyped spectacle like the London Series. But I nonetheless believe this is a major misstep by Major League Baseball and the folks in the UK promoting the game.

There is a small but passionate British baseball community on Twitter that I interact with on occasion. It consists of the sorts of super fans who Major League Baseball should certainly be courting to help with marketing and promotion and growing the game. Regular men and women who strike me very much like the soccer obsessives you might’ve met here in the early 1990s before MLS launched. They may be somewhat odd in their own country at the moment, but if baseball is to grow in the United Kingdom, they will be the vanguard which will help it grow, multiplying every dollar Major League Baseball spends on marketing ten, twenty or a hundred fold. They will be the game’s goodwill ambassadors.

Ever since the rumors of the London Series began they have been getting pumped up about it. Some I know made hotel reservations in London for this the day the dates were announced. These ticket prices broke yesterday and, let me tell you, they are not at all pleased with this price structure. They are talking about how they simply can’t or won’t go given how obscene the ticket prices are. It has dampened their enthusiasm for an event for which harnessing their enthusiasm is absolutely essential if Major League Baseball wants this to be more than just a one-off spectacle for the wealthy.

Like I said: I imagine the stadium will be full because of the novelty factor. But I can’t imagine that MLB wanted this to simply be a novelty. I presume they have long term plans to grow the game outside of North America and, potentially, one day play games in Europe and other places on a regular basis. To do that, you gotta think long term. These prices seem like the epitome of short term thinking.

ST. PETERSBURG, Fla. — AL batting champion Luis Arraez won his salary arbitration case and will get a $6.1 million salary from the Miami Marlins, who acquired the infielder from the Minnesota Twins last month.

Miami argued for a $5 million salary during a hearing before John Stout, Mark Burstein and Scott Buchheit. Arraez received a raise from $2.2 million.