You’d think that if you take nearly four minutes to watch a play, over and over again, that you stand a decent chance of getting it right, but that was not the case for the replay officials covering the Astros-Red Sox game last night.

Houston was down early but came back to tie things up with a four-run rally in the fifth inning. Jump forward to the seventh. With the game still tied at five Jose Altuve bunted his way on, made it to second base on an error and made it to third on a passed ball. With one out, Yuli Gurriel grounded to short and Altuve broke home. Xander Bogaerts threw home, the throw was high, Sandy Leon did the reach-grab-swipe tag thing and . . .

The call on the field was “out.” A.J. Hinch challenged and it took three minutes and 50 seconds for the review to be completed.  The call stood, with replay officials saying it was inconclusive if the tag was applied before he touched the plate with his left hand. Which is odd given that it took me a matter of seconds, on my first look at the above video, to see that he was safe. I screencapped it: 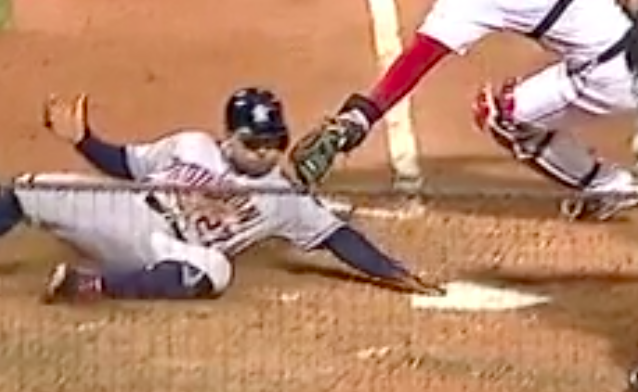 A.J. Hinch after the game:

“He did get in there. It’s clear as day. I’m tired of these questions because replay’s set up for precisely that type of play, and we feel like we have clear evidence.”

As you likely know by now, the game remained tied until the ninth when the Red Sox won it on a walkoff RBI single from Mitch Moreland, reducing the Astros’ lead over the Athletics to two and a half games in the AL West.

Bad calls happen — it’s not an offense against God and Nature for the on-field ump to get that wrong given how fast it played out — but replay is supposed to fix them. That no one could see that Altuve was in ahead of that tag in nearly four minutes when anyone with an internet connection and access to MLB.com could see it in, like, 20 seconds, is a problem.