BLUEFIELD, WV — I had a half-rack of ribs, cole slaw and potato salad midday Sunday, so I wasn’t even remotely hungry when I got to Bowen Field for the Burlington Royals-Bluefield Blue Jays game. But when you’re offered fried chicken, cornbread, baked beans and your choice of homemade cookies and cakes from a bunch of sweet middle-aged West Virginia ladies, well, you make room.

The spread was part of a postgame meal put on by those middle-aged ladies — and a good number of men, I might add — who are members of the Bluefield Blue Jays Booster Club. I had never heard of a minor league booster club before. As it was, I only learned about the Blue Jays club by accident when I checked in to the Bluefield Inn, the bed and breakfast where I was staying on Sunday. The owner, Kitt McCarthy, is a Booster Club member and she told me all about it.

On one level, Booster Club members are Bluefield Blue Jays super fans. They all have “Booster Club” shirts, most are season ticket holders and they show up for all of the games (The Bluefield Inn had a “Blue Jays Game Today” sign out front). Beyond that, however, they “adopt” Blue Jays players, inviting them into their homes (just to visit, not to live; they have their own arrangements for that), host social outings, and put on three or four postgame dinners over the course of the season. Dinners like this one, to which McCarthy invited me, with said invitation immediately accepted.

The dinner was for both the Booster Club and for the players, most of whom quickly showered after the game, came upstairs to the community room just behind the first base grandstand and filled up their plates. It was no catered affair. Booster Sandra Malamisura made the fried chicken. Doris Kantor — who I wrote about yesterday — made rum cake that DID NOT skimp on the rum. As I ate I talked to Rocky Malamisura, Sandra’a husband, who also happens to be the Bluefield Blue Jays general manager. Rocky told me that, in the past, he’s done “Thanksgiving in July” dinners where he’d roast a dozen or more 14-pound turkeys and all of the fixings. Since Thanksgiving is, objectively, the best holiday I was rather sad I missed that, but the fried chicken was excellent too.

As I was wolfing down my second piece of rum cake, I tweeted a couple of photos out of the dinner. The response back from some of my followers was at first surprising, but upon a moment’s reflection, quite understandable. It went like this, basically: “it’s really nice that the Booster Club does this for the players, but it’s also a shame that it’s necessary.”

The point being made there is tied up in a topic we’ve talked about quite a bit on this site over the years: minor leaguers are paid miserably, typically eat terribly, are generally treated as cogs in a machine by Major League Baseball teams who can’t even be bothered to pay them a minimum wage and are completely ignored by a player’s union which should do more to help improve their working conditions. “Hey, it’s great that these boys are getting some free chicken,” my followers were saying, “but it’s a shame it takes volunteers to do it when the Blue Jays are owned by a multi-billion dollar media company and could do more if it wanted to.”

I asked a couple of the Boosters about that. They agreed that it can be tough for minor leaguers who don’t come to town with fat bank accounts due to fat signing bonuses, and they acknowledged the observation about major league treatment as minor leaguers as superficially valid. But it’s hard, and unfair I think, to make any reasonable claim of a connection between the miserly ways of Major League Baseball teams when it comes to minor leaguers and what was going on in the community room at Bowen Field Sunday evening.

For one thing, there is no connection at all between the Bluefield Blue Jays and the Toronto Blue Jays apart from the player development affiliation. As the Bluefield Blue Jays GM, Rocky Malamisura is in charge of minor league team business, concessions, ticket sales and game day operations. He has no say in baseball operations, player salaries, training, nutrition or any of that stuff. As such the suggestion, made by some of my followers, that a free meal or three is no substitute for higher salaries for minor leaguers makes little sense. No one in Bluefield can do a thing about that and no one in Toronto is participating in what’s going on in Bluefield. We’re talking about two very different things here that aren’t in any way connected.

More to the point, however, is the fact that neither the purpose of the dinner nor the purpose of any of the Booster Club’s events is to meet players’ economic or nutritional needs. They’re not doing this to pick up slack. The club’s mission, as stated on their Facebook page, is to “help welcome and make Bluefield Blue Jays players and coaches feel at home while they’re in town,” and the Boosters I spoke to view that — and the overall promotion of Bluefield baseball — as their primary purpose. It’s a valid purpose and an important one in and of itself I might add.

Most of these players are between 17 and 20 years-old and a great many of them are mere weeks from leaving their childhood homes. They come from far away places, many from other countries, and have been assigned to a tiny town in the middle of the Appalachian mountains where they know few if any people and may not even know the language. Pitcher Eric Pardinho just got a nearly $2 million signing bonus so I’m sure he can afford three squares a day, but he’s also 17-years-old and is living away from Brazil — Brazil! — for the first time in his life. I’m sure he would enjoy a nice Sunday dinner with people who care about him even if the big club had a full-time chef and nutritionist back in the dorms.

The Bluefield Blue Jays Booster Club is not a charity organization. It’s a community organization. The sort of community which, in an age where minor league teams are increasingly owned by major leagues clubs and/or are being relocated to suburban areas near major cities, is increasingly hard to find on the minor league baseball landscape. After talking to the Boosters, sharing a meal with them and observing their love and affection for the team, its players and the town in which they all live — some permanently, some only until they get called up to Lansing or Vancouver — I fail to see any problem whatsoever. In fact, I see something which should be replicated. 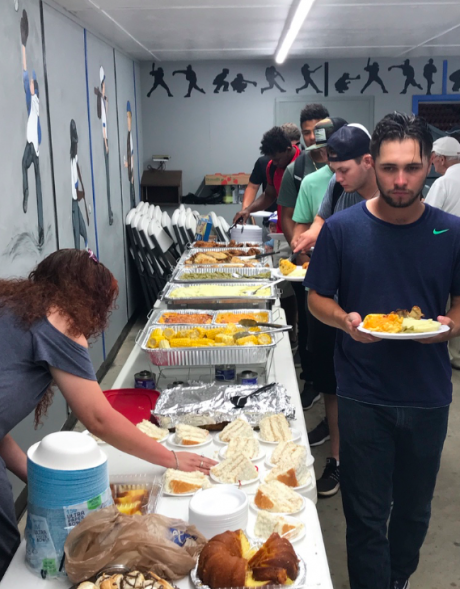 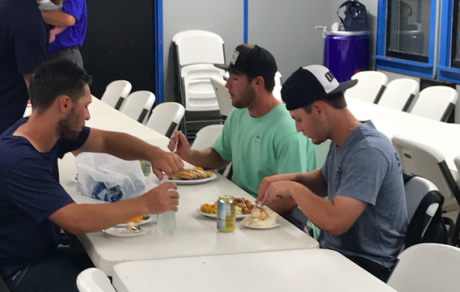