The latest update to the All-Star voting is in and it reveals that Astros second baseman Jose Altuve is the leading vote-getter in all of baseball. Altuve, on his way to his sixth All-Star appearance and fourth starting selection in a row, has has 1,572,101 votes. Altuve leads the Majors with a .342 batting average and 102 hits.

At other positions Tampa Bay Rays catcher Wilson Ramos has overtaken Gary Sánchez of the New York Yankees at catcher, José Abreu of the White Sox leads at first, third base is led by José Ramírez of the Indians, Manny Machado of Orioles leads at short, Boston’s J.D. Martinez paces the DHs and the Sox’ Mookie Betts, the Angels’ Mike Trout and the Yankees’ Aaron Judge round out the starters. 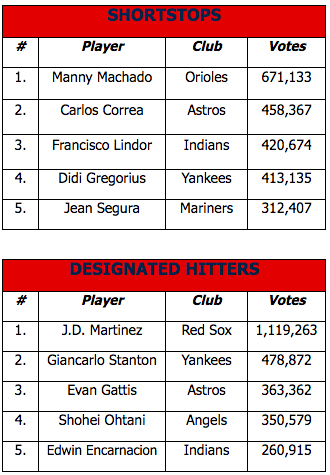