I would hope by now that I no longer have to preface All-Star talk with my usual “none of this matters” disclaimers, but please keep all of that in mind when I mention that Nick Markakis is leading all National League outfielders in All-Star voting.

Markakis, with 1,173,653 votes, has surpassed the slumping Bryce Harper in that category. Harper has 1,002,696 votes. The third place outfielder is Matt Kemp of the Dodgers with 925,697. Fourth place — Charlie Blackmon of the Dodgers — is like 300,000 votes back of Kemp.Yes, Markakis, Harper and Kemp may be the starting NL outfield. Brandon Nimmo — not on the ballot — should be grumpy, but he’ll get his chance I’m sure.

The thing about it: Markakis, for as unexpected as his appearance may be on this list, deserves to at least be in the top three. He’s second in WAR among National League outfielders behind Lorenzo Cain. He’s slowed down a good bit in June and he’s coming off of a 2017 season in which he had a 96 OPS+ and 0.7 WAR, but he’s having quite an outstanding season. I write that mostly so that there is a record of it come October and we’ve all forgotten it.

Seriously, though, good for Markakis, who has never made an All-Star Game. Good for Kemp too for that matter, who most people assumed was a walking — well, limping — corpse heading into this season. Good for Harper because anything that can keep up the guise of him having a good year when, in reality, he’s really not, will help his confidence as he heads into free agency.

Finally, good for the American League, who will likely get to face a far, far inferior National League team next month in Washington.

The rest of the voting: 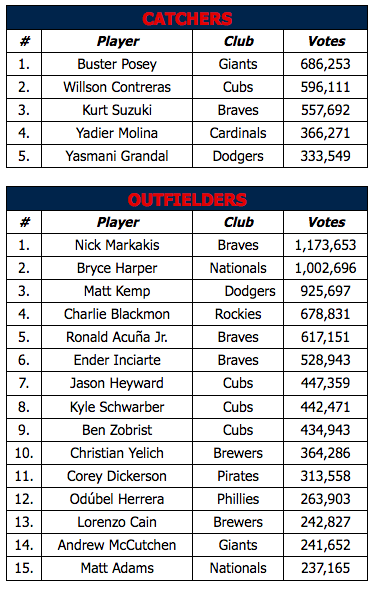