These will come weekly between now and when the ALL-Star rosters are chosen, they will change, and, eventually, just about everyone deserving will find their way onto the All-Star roster either by election or appointment. But for now Freddie Freeman is leading the NL All-Star vote.

Not to take anything away from Freeman, who is having an outstanding season, but it’s worth noting that All-Star voting means a lot less now than it used to mean. Mostly because it’s all online and fans are not only allowed to stuff the ballot box but they’re actively encouraged to by the various clubs, with little or no effort made to stop people from voting hundreds of times if they want to. See, Major League Baseball likes you doing that because when you do it, you’re loading and reloading the ads for the company it partners up with to sponsor the voting page.

These days, leading the All-Star voting is just as much a function of a team’s social media operation and the number of home games during a voting period as it is worthiness. Which again, in the case if Freeman is fine because he’s having an amazing season so it’s a nice confluence. In the cases of his Braves teammates Ozzie Albies and Nick Markakis, well, yeah, there is likely some home team enthusiasm afoot too, even if they’re also having nice seasons for them. As the voting goes on, we’ll see a lot of patterns best explained by fan enthusiasm as opposed merit. Which, hey, fine. It’s the fans’ game and they can do what they want to. Just as long as we remember the most important lesson here: nothing matters. None of this matters at all.

AL update comes tomorrow. For now the voting looks like this: 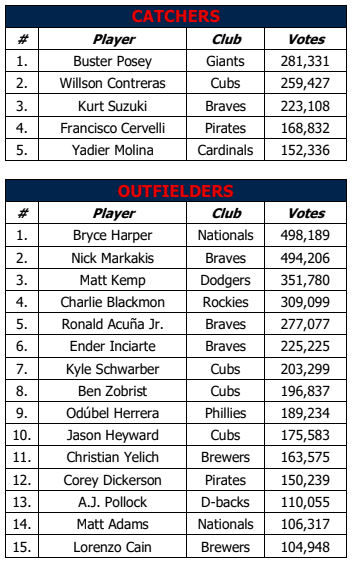