These are the scores. Here are the highlights:

Braves 8, Rockies 3: The Braves are riding a three-game winning streak after out-slugging the Rockies during Colorado’s home opener. Rookie second baseman Ozzie Albies engineered his second homer of 2018 in the first inning, followed by Dansby Swanson‘s near-cycle and Brandon McCarthy‘s first career extra-base hit: a two-run double lined off of a 1-1 pitch from German Marquez in the fifth. If you haven’t been keeping track lately, the Braves have racked up a franchise-best 56 runs in their first seven games, good for the most in the league (and given a generous boost by their 15-run and 13-run outbursts over the last week, too).

Indians 3, Royals 2: There was no last-minute drama on Friday, no ninth-inning rallies or instant replay upsets to keep fans on the edge of their seats. In fact, it only took one inning to decide the victor — in the top of the first, Mike Moustakas and Lucas Duda eked out two runs against Carlos Carrasco, followed by the Indians’ modest three-run spread in the bottom of the inning. From that point on, the game gelled into a perfect pitcher’s duel: eight shutout innings from both sides, capped by a strong showing from Andrew Miller in the eighth and Cody Allen‘s second save of the year.

Orioles 7, Yankees 3 (14 innings): The Orioles played the longest extra-inning game of their season on Friday, a 14-inning affair that saw two home runs from Manny Machado, Chris Davis‘ first homer of the season and an 11th-hour grand slam from Pedro Alvarez. One of the most peculiar moments, however, was saved for the 11th inning, when Orioles reliever Mychal Givens blocked Didi Gregorius as he charged toward home plate.

👏 @MychalGivens with an incredible play at the plate. #Birdland pic.twitter.com/YVI91sielS

The Yankees challenged — Givens had clearly failed to give Gregorius a path to the plate — but the original outcome of the collision was upheld, as a) there is no protocol for a non-catcher obstructing the plate and b) Givens had not yet received the ball and was attempting to field it.

Blue Jays 8, Rangers 5: Marco Estrada looked nearly untouchable on Friday night, spinning six frames of one-run, seven-strikeout ball against a lackluster Rangers’ offense as the Jays kicked off their nine-game road trip. The only real blemish on his pitching line was Shin-Soo Choo‘s one-out home run in the bottom of the sixth inning, a 394-footer that finally put Texas on the board. With Estrada out of the game, the Rangers perked up a little — enough to mount a four-run rally in the seventh, that is — but couldn’t quite muster the effort needed eclipse the Blue Jays’ three-run lead.

Brewers 5, Cubs 4: “We’ve been a little bit of a high-wire act for a little over a year now,” Brewers manager Craig Counsell told reporters. “That’s exciting, it’s maddening, it’s frustrating. It’s entertaining baseball, I think — even on the nights it doesn’t work out.” He wasn’t wrong, at least when it came to Friday’s nail-biter against the Cubs. The maddening? Brandon Woodruff expended an unsightly 95 pitches through 3 2/3 innings, prompting an early exit in the fourth. The frustrating? Tied 4-4 in the seventh inning, the Brewers loaded the bases against Justin Wilson, only to be foiled by Lorenzo Cain‘s inning-ending strikeout versus Steve Cishek. The entertaining? Well, this:

Pirates 14, Reds 3: It’s little surprise that the Pirates have compiled their best start to the season since 1976, especially given their second double-digit performance against the last-place Reds on Friday. Trevor Williams secured his second win of the year with an incredible 10 hits over 5 1/3 innings, but managed to limit the damage to just two runs as the Pirates built up to an 11-run lead — just the way they scripted it.

Padres 4, Astros 1: Sure, leave it to the Padres to upset the Astros’ five-game winning streak. Five innings of one-run ball from Luis Perdomo? Four shutdown frames from the bullpen? Five consecutive hits in the fifth, punctuated by a one-out, two-run double from Jose Pirela? Yep, that’s definitely the way we saw this series going.

Zack Cozart drove in two runs on a throwing error from Matt Chapman, Andrelton Simmons contributed a pair of runs of his own with a ground-rule double and RBI single, and Justin Upton collected his second dinger of the year. Ohtani didn’t limit himself to a single home run, either: he returned in the fifth to walk in a run, too.

Dodgers vs. Giants (postponed): Expect baseball-averse weather for the next day or so. The Giants will make up Friday’s postponement on Saturday, April 28. This was yesterday’s view at AT&T Park (via Twitter): 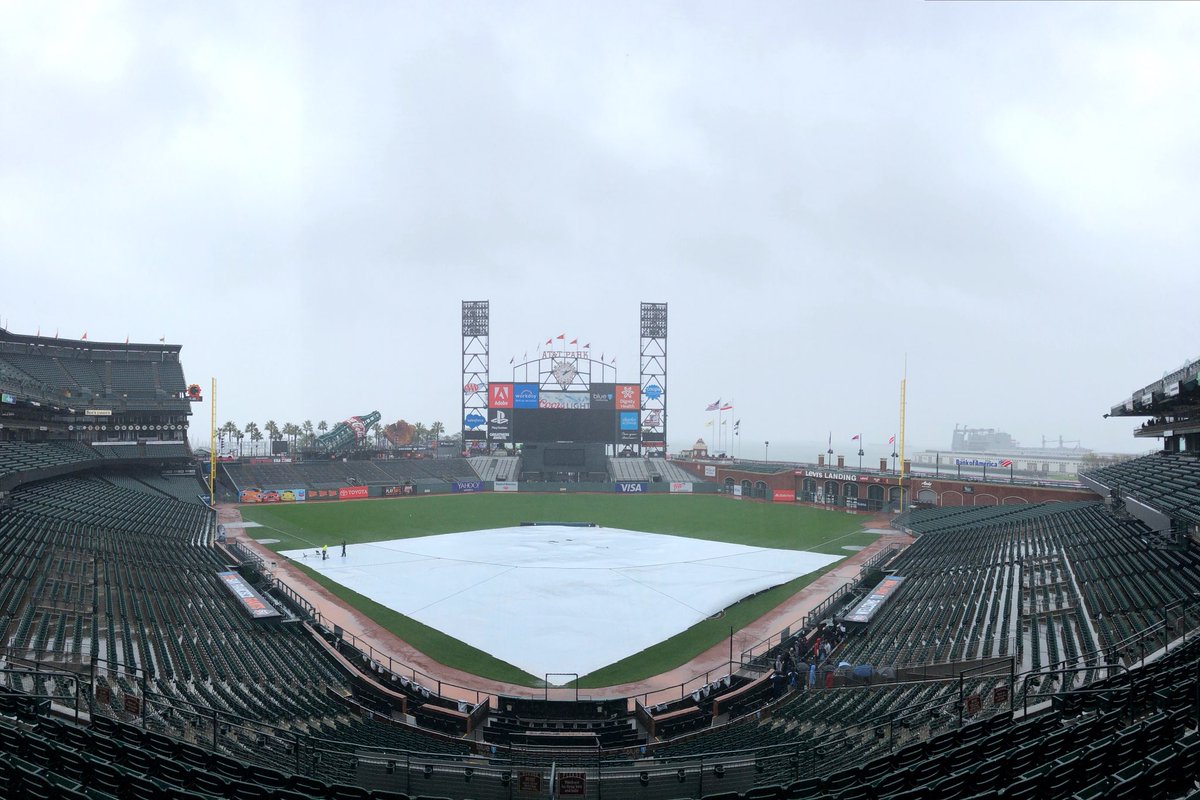 And this is today’s: