The Arizona Diamondbacks announced today that they are bringing back a thing that hasn’t existed since before their own franchise did: the bullpen cart.

Back in the 1960s, 70s and into the 80s a lot of teams experimented with motorized transportation to ferry relief pitchers into the game from the far reaches of the bullpen, which stood, uh, only a few hundred feet away at most. I didn’t necessarily understand the need for a bullpen cart and I still don’t really get the appeal on a personal level, but bullpen carts were kind of fun, right? Decorated golf carts at worst, near works of art when created with care. The Mariners had a bullpen boat, for cryin’ out loud. That was pretty neat. The last one in existence was a Harley-Davidson motorcycle with a relief pitcher side car used by the Milwaukee Brewers in 1995. Since then, they’ve been the stuff of nostalgia.

The Dbacks model is a modern variation on the theme, in that — like everything else these days — its got corporate sponsorship: it’ll be called the “OnTrac Bullpen Cart,” sponsored by the OnTrac parcel delivery company. Anything to get an announcer to read a plug, I suppose. Or a blog post to give a brand a shoutout. 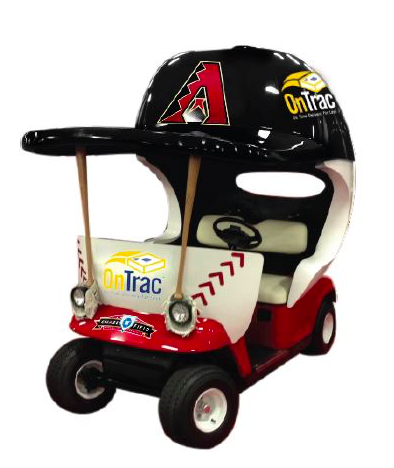 I can’t imagine a super intimidating closer using one of those — “Enter Sandman” or “Hells Bells” lose a bit of their oompf when the pitcher climbs out of that little thing after put-putting to the mound — but maybe intimidation is overrated?