How much money should Jake Lamb make in 2018? Is Michael Wacha fully recovered from that shoulder stuff he’s been dealing with for years, or has it forever changed him as a pitcher, his good FIP notwithstanding? Should Ken Giles be paid more because he helped get his team to the World Series or should he be paid less because he, you know, kinda stunk up the joint in the World Series?

These are all questions that fans who skew a bit more intense than others may have asked themselves from time to time, but I doubt they’ve put hours into answering them. That’s the province of those players’ agents and the front offices for the Diamondbacks, Cardinals and Astros.

It was also, however, the province of several dozen law students who did battle in New Orleans as part of Tulane University Law School’s 11th annual International Baseball Arbitration Competition, which I attended last week. It was one of the most entertaining and enlightening baseball and legal experiences I’ve had in some time.

The setup: students from law schools around the country compete in 2-3 person teams, taking on the role of either the player’s attorneys or a baseball’s team’s attorneys in mock arbitration hearings. Each team competed multiple times, representing Lamb, Wacha, Giles or the clubs for which they play. Preliminary rounds were held on Thursday, quarterfinals, semifinals and finals were on Friday. As in a real arbitration, the sorts of which will be held next month, they argue why the player should or should not be paid the salary proposed by the player’s agent or proposed by the club, marshaling the player’s statistics and the general arc of their career, as well as arbitration awards or arbitration settlements achieved by comparable players in recent years as evidence.

I was lucky enough to be one of the 14 guest arbitrators judging the cases. I was selected because I’m a lawyer who knows a bit about baseball, but I was easily the least qualified of the judges there. These law students had to face a murderer’s row of experts in the baseball arbitration process, including attorneys, agents and team, league and union employees who spend all or most of their time working on actual arbitration cases. The panel:

Almost all of these people can tell you every little detail of scores of arbitration cases they’ve been a part of for longer than some of you have been alive. The ones who haven’t argued arbitration cases know more about the players than anyone who either (a) doesn’t directly employ them; or (b) isn’t a blood relative. To say that I was happy to be on the judges’ side of the table rather than the competitors’ side is an understatement.

Indeed, because of the expertise of the panel, this was probably tougher for these students than real arbitrations are for actual lawyers. In real arbitrations, most of the arbitrators are not baseball experts. They’re arbitration experts who, yes, have probably handled baseball cases before, but nowhere near to the extent the competition judges have. This is why — much to the chagrin of many people in and around Major League Baseball — real arbitrations tend to focus on “back of the baseball card” stats like home runs, pitcher wins, saves and the like, even if those are not the best metrics to judge a player. WAR is used in almost all arbitrations now, but maybe not FIP or wRC+ or leverage index. In the Tulane competition, however, things got deep. Yes, blown saves were addressed, but the competitors got into advanced stats as well, deftly weaving the explanation of complex baseball metrics in to their overall argument. Or at least trying to. No matter how successful they were, it was not an easy task.

Another thing making this harder for the competitors: unlike in real arbitrations, where advocates generally make their arguments uninterrupted, we judges had fun interrupting them and asking questions. When WAR was mentioned, some of us would ask whether it was bWAR or fWAR, to see if they knew which of those slightly different stats they were citing and to see if they were trying to stack the deck by using one over the other. When someone made an offhand comment about Citizens Bank Park being a “bandbox,” inflating Giles’ Phillies numbers, I asked “do you have evidence for that, or are you just saying that because people have long said it?” Once, when someone was trying to explain away Giles’ postseason struggles by saying that Clayton Kershaw and Randy Johnson once struggled in the postseason before getting better, a judge asked — seemingly innocently, as if they’d never heard of those men — “Is Clayton Kershaw a closer? Was Randy Johnson? Are you telling me, counselor, that Ken Giles is better than them?” Sometimes these questions tripped up the competitors. Sometimes they were handled with aplomb.

All of that may seem overly harsh, but it’s good training for these future lawyers, most of whom won’t be arguing baseball arbitrations for a living. Rather, they’ll be in trials over contract disputes or commercial arbitrations or arguing appeals in civil rights cases or something. In all of those situations, they’ll be peppered with questions by skeptical judges.

Advocacy is advocacy, though, be it about ballplayers or business clients, and the same skills come to bear. Can you make a compelling case? Can you cite evidence supporting it? Can you persuade that skeptical judge? Can do you it while appearing calm, cool and collected? The baseball stuff made this WAY more fun than all of that, but at bottom, 60% of the teams’ score was based on how well they advocated and only 40% of it was based on their actual baseball case.

The baseball stuff was what made it fun, though. And while sitting through seven arguments, I learned, or was reminded about, a lot of neat and weird aspects of the baseball arbitration process fans don’t often consider. Some highlights:

I could go on forever about this kind of stuff. Suffice it to say, though, that for me the competition was fun and fascinating and served to scrape the rust off of my legal advocacy gears. For the competitors, it subjected them to some real world — and tougher than real world — legal conditions which will no doubt serve them well in their careers, whether those careers involve sports law or not. They had to create a strong presentation imbued with an overarching theme, supported by data and visual aides, all of which could be delivered in a 15 minute case-in-chief and a 7.5 minute rebuttal, all while being peppered with questions, not all of which had answers. It may have been fun at times, but I imagine it was super stressful as well.

That stress was compounded by the fact that almost everyone (judges included) had to contend with flight cancellations and delays and, until late Thursday, a lack of water all over the city due to a freak cold snap. We judges moaned and whined about restaurants being closed and not having showers on Thursday morning. The competitors — and the competition’s organizers, all of whom are themselves students — took it in stride. People complain about these kids today, but based on what I’ve seen, these kids today are tougher than most of us Gen-Xers and Baby Boomers. We’re spoiled as hell. Soft too.

In keeping with that theme, allow me to note that, no, there were no mere participation trophies for the assembled law students. There was a winning team: Katherine Whisenhunt and Luke Zaro from the University of Virginia Law School: 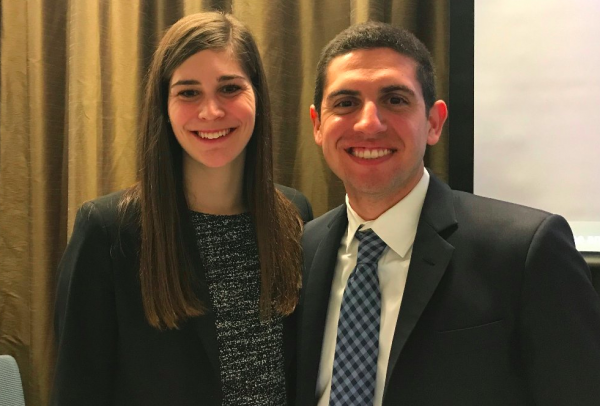 In the final round, they argued in favor of Ken Giles, getting him his $4.9 million and defeating the club’s request for $4.15 million. I had the privilege of seeing them argue in preliminary rounds as well as the finals and can say that their victory was well-earned. Some opposing attorneys are going to have their hands full with these two one day. Full with all of the competitors, really, as I didn’t see one team that could not, but for the lack of some gray hair at the temples, pass for practicing lawyers, right now. They were all well-prepared and effective. I’ve said some bad stuff about lawyers since I became a lapsed one, but these kids give me hope for the future of the profession.

As for the Giles case: while the Houston Astros may be the best team in game and while they may employ the best analysts in the game, sometimes it helps to have a trusty lawyer by your side. If you’re struggling, guys, give Katherine and Luke a call. They can probably help you out.