Last night, Shohei Ohtani’s representatives informed the Yankees, and many other teams, that they will not be invited to make an in-person presentation as they narrow down possible destinations for the recently-posted two-way star. The message, as communicated by Brian Cashman to the press, was that Ohtani seemed more interested in playing for a west coast team and, perhaps, in playing in a smaller market.

Which is is prerogative, of course. Many players have such preferences. And it’s not as if he’s limiting himself to truly small markets as he is still reportedly open to San Francisco, which is the sixth largest media market in the country, and Seattle, which is 14th. Guy just doesn’t want to play on the east coast. No big deal, right?

Tell that to the New York Daily News, which ran this on its cover today: 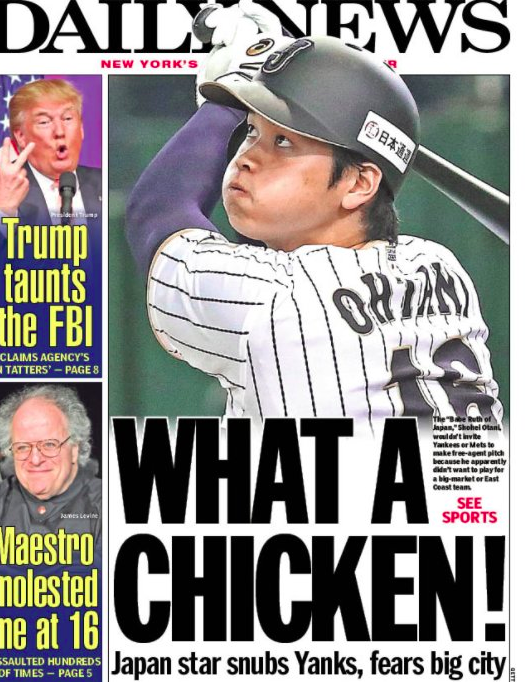 The Daily News also sent out a tweet with that which said “STAGE FRIGHT: Shohei Otani too scared to play for the Yankees.” The story attached to that headline, however, — by reporter Peter Botte — contains no such accusations. It’s a straight newser, communicating Ohtani’s decision and the expected, understandable and reasonable reaction of the Yankees.

What an embarrassing cover, though. How bush league to put words in Ohtani’s mouth and to ascribe emotions and motivations to him that it cannot know (and which are almost certainly erroneous). It’s also ironic too. The Daily News is trying to cast Ohtani as small-time, yet it’s the paper which comes off as provincial and insecure.

But really, dudes, I have NO IDEA why he doesn’t want to come to New York.