Major League Baseball announced the start times for the two Wild Card games and the Division Series games through Saturday.

The takeaway: if you’re a fan of the Red Sox or Astros and you work a typical day job, be prepared to either take off work or else wait until Game Three to see any action, as both of the first two games of that series will begin in the afternoon. If you want to watch Game One of the Dodgers vs. NL Wild Card winner game on Friday and you don’t live on the west coast, boil some coffee and prepare yourself for a long night.

As the for Sox and Astros daytime games, Fox and Major League Baseball apparently felt that not having two playoff games going on at the same time was preferable to a larger audience being able to see the early game. I suppose they know what they’re doing as far as TV ratings and things go, but this will no doubt annoy some folks in Boston and Houston. As for the Dodgers first game: it’s a large country, time zones are a thing and, really, it’s way better for the folks in Los Angeles and either Phoenix or Denver to be able to see those games at a reasonable time than it is for east coasters, so I’m cool with that decision.

Here are the start times: 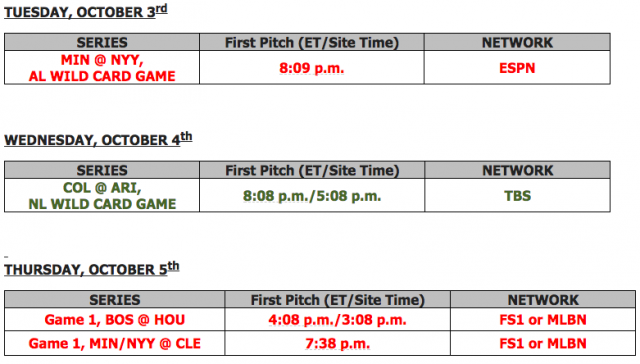