Indians 9, Twins 3; Twins 4, Indians 2: Yan Gomes and Jason Kipnis each had three hits and a homer in the first game, helping the Indians win their sixth straight. That streak ended in the second game, however, as Aaron Slegers, making his big league debut, allowed only two runs while pitching into the seventh and Max Kepler hit a go-ahead homer that inning. Eduardo Escobar knocked in two on a 3-for-5 evening.

Diamondbacks 4, Astros 0: Patrick Corbin fell one out short of a shutout, allowing only four hits in eight and two-thirds, and Archie Bradley retired the final batter to make it a team effort. Jake Lamb homered. Daniel Delscalso hit an inside-the-park homer. Lamb called that weirdness and raised by striking out on a wild pitch that allowed David Peralta to scores from third.

Reds 13, Cubs 10: The Reds scored nine runs in the second inning. Normally that’d be enough to ensure a win, but this one was wild, with the Cubs coming back to tie it in the fifth. The Reds kept scoring, however, winning it going away. Lots of crooked numbers in this box score, with Reds outfielder Phillip Ervin driving in four, including the two-run homer which broke the 9-9 ties, and Jose Peraza and Joey Votto each driving in three for Cincinnati. The Cubs hit six homers: Ian Happ had two and Kris Bryant, Alex Avila, Javier Baez and Kyle Schwarber each hitting one. Jon Lester gave up nine runs — seven earned — and left before he could finish two innings. Scott Feldman allowed six in less than four.

Braves 10, Rockies 4: Ender Inciarte hit two of Atlanta’s four homers as the Braves bounced back from Wednesday’s rout. Freddie Freeman and Tyler Flowers also homered as Colorado and Atlanta split their four-game set. A scare for the Rockies: Nolan Arenado had a ball smack his hand as he tried to field it at third, forcing him out of the game. X-rays came back negative, however, which is positive.

Blue Jays 5, Rays 3: It was tied 3-3 in the eighth, thanks in part to two solo homers from Josh Donaldson, when Justin Smoak hit a two-run homer. Donaldson is on fire, having hit 11 home runs over his past 19 games, including four times in this series. He’s batting .400 (20 for 50) with 21 RBI in the month of August. There are nine teams in the AL realistically competing for two Wild Card spots, with the Blue Jays — previously written off for dead — among them, three games out of the second spot. September is gonna be nuts.

Cardinals 11, Pirates 7: Dexter Fowler drove in three, two of which coming on a triple, as the Cardinals come back after being down 5-0. Game highlight, though, was Josh Harrison dancing.

Yankees 7, Mets 5: Gary Sanchez homered and drove in five runs as the Yankees sweep the Mets in the Subway Series. Which is misnamed, as I figure that few if any of the players involved actually take the subway to the games anymore, what with the subway being an absolute disaster these days.

Rangers 9, White Sox 8: Nomar Mazara homered in drove in five too, hitting a tie-breaking three-run homer in the fifth. The Rangers have won four straight and seven of eight, climbing back to .500. Mazara has 25 RBI in his past 19 games and is on a pace for 111.

Nationals 2, Padres 1: The Nats only had four hits in the game, but one of them was a Ryan Zimmerman homer to break a 1-1 tie in the eighth. Edwin Jackson — who, at this point, we must refer to as “Edwin Jackson of all people” every time he’s mentioned — allowed one run over seven, scattering eight hits.

Giants 5, Phillies 4: Jeff Samardzija was solid, winning for the fourth time in his last five starts and Jarrett Parker hit a two-run double in the fifth that led to Denard Span and Hunter Pence scoring within seconds of each other after Pence almost caught up with Span on the base paths: 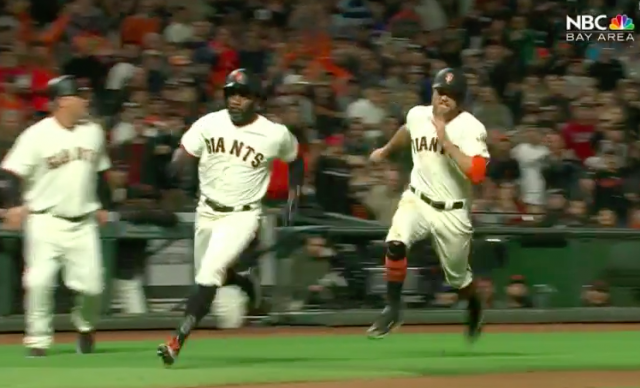 Don’t look back, somethin’ might be gainin’ on ya.