In today’s St. Louis Post-Dispatch there’s a story about the young Cardinals backup catcher, Carson Kelly. It’s not a controversial story by any stretch. The standard “get to know the young guy” kind of thing. A quote in the story, however, is stoking controversy between the Cards’ starting catcher — Yadier Molina — and his manager.

Here’s Mike Matheny, talking about a couple of starts recently given to Kelly:

“Yadi’s caught a lot,” Matheny said. “Yesterday, just kind of watching him go around the bases, too, you could tell that he’s, you know…” Matheny changed course mid-sentence, but he was implying that Molina is tired.

Molina obviously read it, because here is what he wrote on his Instagram account, along with a screen-cap of the Matheny quote: 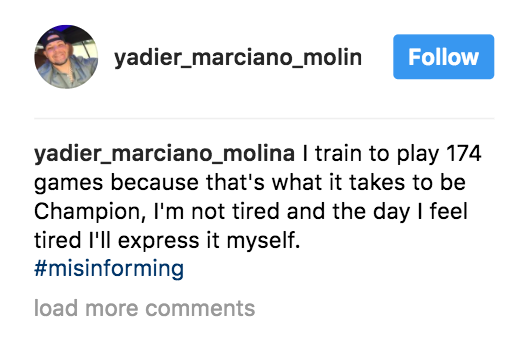 It’s just not the sort of thing players want to read about themselves. At the very least, not something Molina wanted to read.