Brewers 8, Orioles 1: Chase Anderson went to the DL and Brent Suter took his place in the rotation. The former is not ideal but the latter worked out OK here, as Suter allowed only one unearned run on four hits in six innings, striking out eight. Manny Pina singled in one and doubled in two. Travis Shaw homered but he had to leave the game after getting hit on the wrist with a pitch.

Nationals 3, Mets 2: Steven Strasburg tossed seven shutout innings, allowing only two hits. After Max Scherzer‘s dominant start on Sunday, one can’t help but envision an early 2-0 hole for any team unlucky enough to face Washington in the playoffs. Of course, that irresistible force will have to meet the unmovable object that is the Nats’ inability to win a playoff series, so I guess we’ll see. If they do blow a series lead it’ll be because of the bullpen, which blew yet another ninth inning lead here, allowing a Curtis Granderson homer to tie it up. Ryan Raburn bailed the Nats out, however, by delivering a walkoff RBI single.

Yankees 6, Blue Jays 3: Masahiro Tanaka was dominant for seven innings. Chase Headley drove in three, with two coming on a double and one coming via a bases loaded hit-by-pitch. New York had a run walked in with the bases loaded in the same inning. Things were all beer and Skittles for the Yankees until the ninth when Aroldis Chapman allowed two runs on three hits in a non-save situation.

Cardinals 14, Marlins 6: Luke Voit, which sounds like a name you make up on the spot when the cops catch you breaking into a sporting goods store, hit a homer as the Cardinals romped. Miami starter Jeff Locke gave up 11 hits and 11 earned runs in two and two-thirds innings of work. Which made it OK that Cardinals starter Adam Wainwright gave up six runs in the fifth inning. Wainwright also drove in two with an RBI single, so we’ll take a couple of those off his tab.

Red Sox 7, Rangers 5: The Red Sox had a one-run lead in the bottom of the ninth and Craig Kimbrel on the mound. That’s usually automatic, but here Mike Napoli took him deep to send this one to extras. Andrew Benintendi hit a single with the bases loaded, driving in two, in the top of the 11th inning, helping the Sox to their fifth straight win. Dustin Pedroia had three hits and four RBI and was intentionally walked to bring up Benintendi. That loaded the bases and caused the Rangers to play their infield in, which in turn allowed Benintendi’s bloop hit to fall, just beyond the infield dirt. Strategy, man. Sometimes it’s just not worth it. 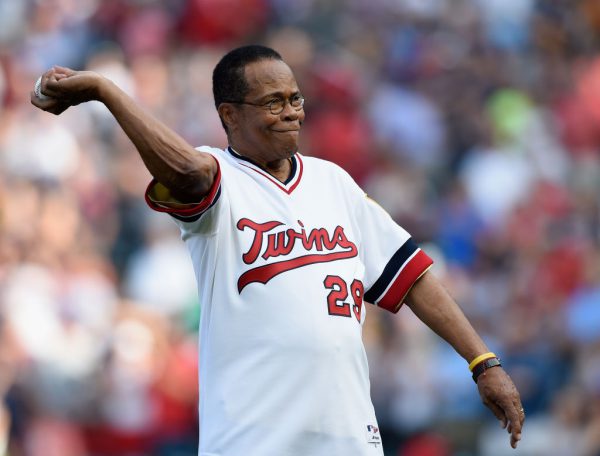 Nice to see Rod Carew back on his feet again. The Twins and Angels legend had a heart and kidney transplant back in December.

Rockies 5, Reds 3: Rockies left fielder Raimel Tapia hit a double, triple and homer on a 3-for-4 day and Jeff Hoffman allowed three runs over seven innings. Hoffman also doubled in Tapia in the second inning. Those two had it covered yesterday. Bud Black on Tapia’s night:

That sounds like I sound when I’m intentionally trying to embarrass my kids. The rookie Tapia probably rolled his eyes pretty hard. Or, like my kids did to me, set up an Instagram account specifically to make fun of Black.

White Sox 7, Athletics 2: Carlos Rodon struck out ten in six and a third innings of work in his second start of the season. Todd Frazier backed him with a two-run double that put the Chisox ahead to stay early in this one. Oakland has lost six in a row.

Royals 3, Mariners 1: Mike Moustakas and Alex Gordon each hit homers and Ian Kennedy allowed one run while pitching into the seventh.That was Moustakas’ 23rd homer of the season. His previous career high was 22, set in 2015.